Tulsa: The Fire and the Forgotten

It’s fitting that this year’s Memorial Day observance falls on the 100th anniversary of the Tulsa Race Massacre. As mentioned in the PBS documentary “Tulsa: The Fire and the Forgotten,” over 400,000 Black men served in World War I, several of whom returned to, or settled in, Tulsa after the war. All of them returned to a country that did not love them back. On May 31, 1921, that sentiment was expressed by a 48-hour siege on the area Booker T. Washington called “Black Wall Street,” an area of Black-owned businesses and real estate in the Greenwood district. Hundreds of Black people were killed by the racist White mob, and the entire area was burned to the ground. Assault came not just from the ground, but from the air via planes bombing the district. No one was charged—in fact, the mayor of Tulsa blamed the dead for basically being uppity and bringing about their own demise.

If this sounds familiar, but you didn’t learn it in school, there’s a good chance you watched HBO’s “Watchmen” series. It’s beyond pathetic that one of the worst massacres of Americans on American soil had to be taught by a television show about superheroes rather than by teachers. I certainly didn’t learn about it in my Blackety-Black grammar school nor in any history classes I had throughout my education. As Washington Post reporter DeNeen L. Brown points out, the crime was so heinous that Black people who survived it did not wish to speak about it because it was too heartbreaking to revisit, not to mention potentially dangerous to discuss in polite company. White residents and politicians in 1921 Oklahoma immediately started spinning the brutality as a righteous act, rewriting history in ways that sound disturbingly familiar to what’s going on right now in America.

Brown, a native of Tulsa, wrote the 2018 article that kickstarted the city’s reexamination of this crime. She is the primary reporter in this documentary, which also includes forensic archaeologists, preachers, historians, and current residents among its gallery of talking heads. Brown speaks about her grandmother, whom she occasionally asked for details about growing up in the South. The answer was always a polite dismissal, a refusal to journey back to whatever trauma she endured. Also, and the documentary brings this up several times, talking about events like this could have gotten you killed. This limited the passing of information, as Black history is quite often an oral tradition more than a scholastic one.

One of many related documentaries on the airwaves this week, “Tulsa: The Fire and the Forgotten” focuses on the attempts to find where the victims of the Tulsa Race Massacre were buried. There’s some discussion about how forensic scientists and archaeologists scan underneath the ground for anomalies that may lead them to mass grave sites. This is an activity performed all over the world, and the hope is that any discoveries may reunite descendants with their murdered family members while allowing the fallen to be properly interred and mourned. Oaklawn Cemetery, the oldest one in Tulsa, serves as the location for several attempts. In Oaklawn, only two of the tombstones mark the graves of Black people, but there are entire areas of land where nothing was documented. Brown is there for each excavation.

Terms that trigger certain people get repeated in this film, words like “systemic racism” and “reparations.” They’re backed up by deep explorations of how history is repeating itself at the expense of Black people. Drew Diamond, the former police chief of Tulsa, describes police officers calling the Black areas they patrolled “war zones,” and that’s what they’re trained to believe. “When you hire and train people with the idea that they’re warriors,” he says, “they’re going to look for the war.” This is backed up by the Human Rights Watch’s 2019 report on the Tulsa PD, which they entitled “Get on the Ground.” Director Jonathan Silvers supplements Michel Martin’s narration on this topic with footage of Black men being shot by the cops, something far more triggering than any phrase or terminology. Equally troublesome is the appearance of armed, White militiamen at Black Lives Matter protests, as well as the city of Tulsa’s freak out over a street painting similar to the one that adorned a street in Washington D.C. after George Floyd’s murder.

“Tulsa: The Fire and the Forgotten” devotes time to residents seeking change and betterment in the community. We hear from Greg Robinson II, a community activist who mentors residents in North Tulsa. His protégé, Tyrance Billingley II, speaks of how Black residents abandon the city after school because they do not feel they can be successful there. A talented graduate “would draw applause” when they said they were leaving Tulsa. So, Billingsley created a business plan to bring a tech center to Tulsa, an opportunity that may keep young talent from jumping ship the second they’re able to leave. I wish there had been more about this particular project, but the documentary has many other details to cover in its 84 minute runtime. I also wish more time had been devoted to the science and research of discovering hidden mass graves. These two subjects warrant documentaries of their own.

A movie like this is only as good as its talking heads. Each person who appears has something informative to impart, from current mayor G.T. Bynum to Eric Stover and Betsy Warner, both of whom are involved with the excavation projects. The pastor of Greenwood’s destroyed and rebuilt centerpiece house of worship, the AME Church, is also profiled. Someone discusses the cruel game of “what if,” as in “what if the successful hotel owner had been allowed to build his brand over time, planting the seeds for generational Black wealth?” But the person who best ties past and present together is Tulsa City Council member Vanessa Hall-Harper. Speaking about the aforementioned armed militia men “patrolling” the protest, she states they “represented the same mob that was represented in 1921 when the massacre took place.” Her words are not hyperbole if one is paying attention to current events.

“Tulsa: The Fire and the Forgotten” works best as a learning tool, filling in some of the blanks of American history, details that were purposely redacted by the same types of people who wish to continue that redaction. It runs on PBS on May 31st, just in time for the anniversary of the Tulsa Race Massacre. 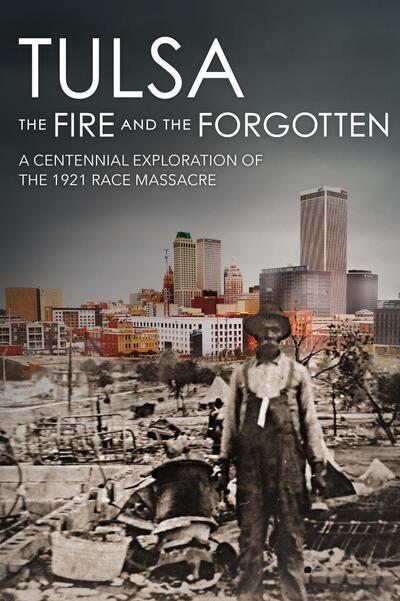