Stéphane Lafleur’s great “Tu dors Nicole” is a remarkable tonal balancing act in such a way that it’s difficult to figure out how he pulls it off. It is both light as a feather and emotionally resonant. It is defiantly episodic and yet has a cumulative power in its storytelling. It is both airy and emotionally lived-in at the same time. Lafleur captures something about those hazy days of early adulthood in which moments that feel like they have no importance suddenly do. It’s about that unique window of time in which our friends sometimes move at a different pace than we do, making decisions we don’t understand. It’s about those days in which we long to advance to something new without realizing that there may be nowhere to go. And it’s funny, heartfelt and gorgeously shot. This is an excellent film.

Nicole (Julianne Côté) has graduated from college, lives at her absentee parents’ house (they’re away for the summer) and works a menial job that she doesn’t particularly like. There’s not much going on in her small Quebec hometown, as evidenced by Nicole’s casual observations of the neighbors around her doing menial things like cleaning up dog poop and dusting light fixtures. THIS is adulthood. No need to race too quickly to get to it. And so Nicole kind of floats through life with best friend Véronique (Catherine St-Laurent) until the two mentally stumble upon a plan to take a trip to Iceland. Nicole just got a credit card, and it’s like everything is free, right?

As they practice Icelandic, Nicole’s plan is derailed by the return of her brother Remi (Marc-André Grondin), who wants to use his parents’ pad as a band practice location. His bassist is on the verge of fatherhood, which leads Remi to dire predictions about the future of the band, while he also hopes that their new drummer will end a line of replacements at that position. It doesn’t help that Véronique seems drawn to the newest band member. There’s a fantastic series of scenes in which Véronique goes from Nicole’s side in one scene to talking to the band in another to singing with them. Nicole has only one real friend and they were going to run away together? What will this do to that plan?

Lafleur has an amazing eye and voice when it comes to the eccentricities of smalltown life. The most memorable character in this quirky milieu is Martin (played by Godefroy Reding and voiced by Alexis Lefebvre), a 10-year-old who hit puberty early and sounds like a grown man, playfully hitting on his former babysitter. Nicole and Véronique’s employers feel like characters of their own as well. But the film belongs to Nicole, even if Lafleur is careful not to overplay the “perspective piece” approach. We regularly watch Nicole leave the frame and then cut to another scene with her, as if we’re watching her from afar without being asked to understand all of her thoughts and motives—a common problem of the coming-of-age drama.

About that visual style: Lafleur and cinematographer Sara Mishara shot “Tu dors Nicole” in beautiful black-and-white, setting up visual compositions that are both gorgeous and thematically resonant. The striking imagery of “Tu dors Nicole” (Mishara crafts amazing imagery from the mundane such as a shot of Nicole in aisles of clothing or barely lit by the illumination of a sewing machine) adds to the dreamlike nature of the piece. The summer after college is a hazy time for most of us—putting away childish concerns without fully understanding what it means to be an adult. After playing miniature golf, Nicole turns to Véronique and says, “This used to be more fun.” We can all relate.

Mishara’s stunning cinematography and Lafleur’s direction wouldn’t matter without the lived-in, genuine performance from Côté. She is tasked with a difficult role in that Nicole is more often a casual observer of the world around her than someone who comments on it. And yet Côté is very careful to not turn Nicole into a snarky misanthrope. She is more uncertain than derisive, which makes her relatable and likable. We want Nicole to find something that makes her happy, or something that makes her anything at all. Unlike so many coming-of-age films, Lafleur offers no easy answers or pat clichés about early-life crises. He merely gives us a character floating through a definitive summer in her life. And then leaves her there, still floating towards an unknowable future. 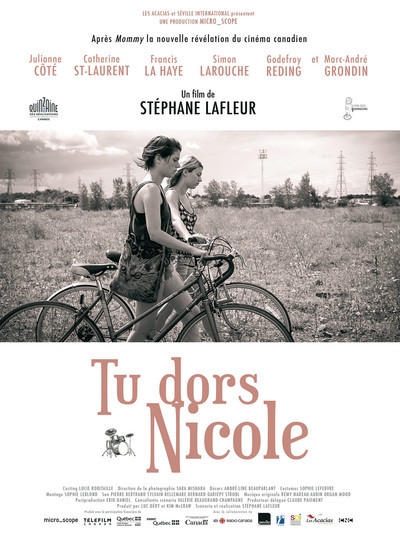