Cheaters and schemers are regular fixtures in many romantic dramas because they come ready to bring tension and intrigue to a story. Will the one partner stray or won’t they? Will each person in the relationship go their own way after the infidelity has been revealed? Is this the thing that breaks a couple already on the rocks? In movies, an affair is a destabilizing force that’s more fun to watch than a happy couple set in their ways. An affair is a roadblock or a catalyst. It’s simultaneously a disaster and a roller coaster.

Brian DeCubellis' "Trust" is set up like a stacked row of dominoes around a cheat and a scheme because of a supposed affair. Brooke (Victoria Justice) is a new gallery owner with an exciting new artistic discovery, the Dublin-based painter Ansgar (Lucien Laviscount). Brooke is banking on Ansgar’s brightly hued, provocative paintings to catch the art world’s eye. With a smoldering persona and a habit of painting naked pictures of his old flames, Ansgar immediately invites the scrutiny of Brooke’s husband, Owen (Matthew Daddario). A successful broadcast reporter in his own right, he feigns support while barely masking his doubt about the seductive artist. But Brooke has her own suspicions about her beau, especially after she sees him getting cryptic texts from younger news assistants from work. And that’s before Owen crosses paths with Amy (Katherine McNamara), a flirtatious blonde who really complicates the story.

Although “Trust” gets off to a shaky start, once the players are introduced and the flirty game’s afoot, it’s a mostly fun ride. The movie hints at things that may or may not have happened, keeping the audience guessing and second guessing who’s cheating on whom. The film also plays with its narrative timeline, double backing to past events and showing small gestures and clues in a new light. That light is also provided by cinematographer David Tumblety, who gives the movie’s New York scenes a glossy neon-sleek look at night and contrasts it with the stark white walls of Brooke’s gallery, the darkened news studio where Owen works and the grey sky days when Brooke and Amy meet. It’s a subtle nod to how the characters feel about each other at the time, like when Owen and Amy meet at a bar and the scene becomes exceptionally blue and alluring on first watch. When the moment is revisited again from a different perspective, it’s more distanced, less like an inviting commercial and more like a game of cat-and-an-easily-gullible-mouse.

“Trust” can be engrossing until its occasional rough patches of hammy dialogue and half-thought-through logic. Some lines simply don’t ring true, some visual effects come across as silly, and some explanations leave the viewer with possibly more questions than answers. DeCubellis, K.S. Bruce, and Kristen Lazarian’s screenplay takes its cues from Lazarian’s play, and it’s perhaps why the interpersonal tension between Brooke, Owen, and their potential dalliances work so well when they’re front and center. The more cinematic interpretations of the play don’t always stick the landing, like a Christmastime confrontation between the couple that plays out in the streets of New York City. Namely, a block or two away from Radio City Music Hall, whose cameo threatens to overshadow the relationship drama at the film’s climax. It takes up almost as much screen real estate as the couple we’re meant to focus on. There are a few of these New York in the holiday shots that try to play up the tragedy of the moment, but end up coming across as more distracting than dramatic.

The cast’s performances can be just as hit or miss. Justice plays up Brooke’s insecurity and suspicions as the spouse who just wants answers, yet begins to doubt if her investment in Ansgar is worth losing her relationship. Nevertheless, she carries on, rebuffing the artist’s flirtations and trying to mend things with Owen. As Amy, McNamara fits the profile of a person you think you know but turns out to be a total stranger. Both Amy and Brooke remain somewhat of a mystery till the end, which could leave some audiences unsatisfied with the movie’s half-truths. The men feel more like stock characters who are set in their ways and behave as expected. Ansgar, in particular, feels more like a cut-out to be lusted after and reduced to a hypersexual character with one thing on his mind.

“Trust” is like a politely salacious book you would pick up at an airport to read on a long flight after an even longer work week. Overall, it’s easy to follow and get caught up in the drama of these characters. There are a few surprises but nothing too earth-shattering or shocking. Trickier affairs of the heart have made their way to the screen before, and while mostly enjoyable, this one isn’t as memorable. 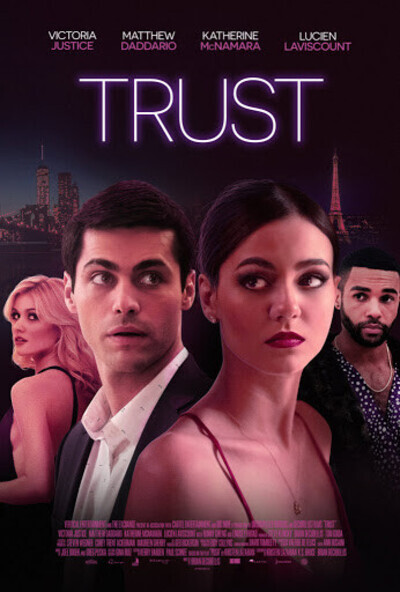