Sometimes, watching a thriller, I'll realize it makes no sense at all - unless the killer was working closely with the screenwriter.

"Traces of Red" is a movie like that. The movie mystifies you as it goes along, but that's nothing to the confusion you feel when it's over. It's not that you don't understand what happened. That's finally all too clear. It's that you can't understand how the killer was so clever that he was able to anticipate every twist and turn of those pursuing him, so that he could devote every action to the service of the movie's plot.

The movie takes place in Palm Beach, where everyone, the narrator tells us, "leads three lives - public, private and secret." The narrator is Jack Dobson (James Belushi), a local cop, who is shown dead of a gunshot wound in the first scene of the movie. Of course, other movies have been narrated by dead men ("Sunset Boulevard" comes to mind), but usually you don't know they're dead right from the beginning.

Dobson moves easily among the several worlds of Palm Beach, especially the secret ones. While his brother (William Russ) prepares to run for office, Dobson prefers a lower profile, solving crimes and making love to the local beauties, who in his case range from cute waitresses to sexy society dames, sometimes within the same 24-hour period. His partner Steve (Tony Goldwyn), who is happily married, sometimes wonders at Dobson's energy, not to mention his lack of discretion.

One of Dobson's lovers is Ellen (Lorraine Bracco), who has a New York accent and blond hair with dark roots, and lives in one of those mansions where if you have to ask how much the servants are paid, you shouldn't have any. She gets jealous when she sees Dobson leaving a parking lot with a waitress, but before long the waitress is dead, and then the complications pile up: Is she a suspect? What about Dobson himself? Turns out there's a serial killer on the loose. Dobson develops this lead with clever detective work, discovering that the killer always leaves with his victim's clothes, is fond of a particular brand of lipstick, uses a daisy-wheel printer with a damaged "L" and "D," and so on. Serial killers in the movies have to work harder these days, leaving meticulous clues. Not long ago I saw one who specialized in blind blond women. The guy in "Traces of Red" is lucky he doesn't get caught at the scene - detained while planting all of his trademarks.

Of course the motive for most serial killings (in the movies, anyway) involves childhood trauma. But the solution involves a basic movie principle that I have identified in my Glossary of Movie Terms, "The Law of Economy of Characters," which states, "Movie budgets make it impossible for any film to contain unnecessary characters." Applying this rule, an audience member can guess the identity of the killer by finding the character who seems otherwise unnecessary.

The law is a little harder to apply in "Traces of Red" than in most movies, because several of the characters seem unnecessary.

Why do we need the brother, for example? Or the partner? Or the society lady? And what are we to make of our certain knowledge that Belushi's character is dead before the killer's identity is discovered? I will leave you to discover the answers to these questions yourselves, and obtain what pleasure you can from them. My problem with "Traces of Red" is that I didn't really care who did it. The characters were chess pieces, pawns in a game set up by the filmmakers, and I lost interest when I saw that their real motives weren't human, but Hollywood: They were behaving according to the requirements of the plot. 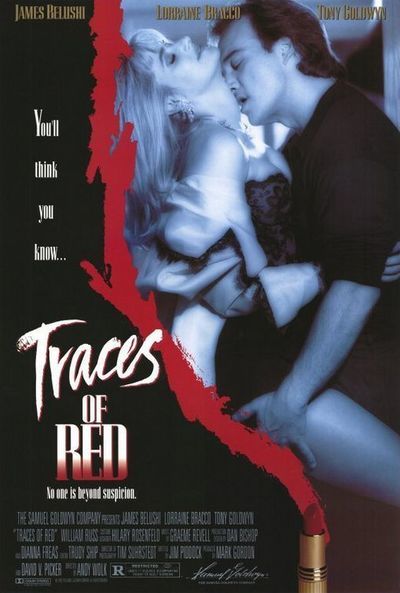