With apologies to Katey Sagal, who in no way embodies the stereotype, the new Blumhouse Television/Epix thriller “Torn Hearts” brings the “hagsploitation” picture back onto the B-movie stage. Epitomized by “Whatever Happened to Baby Jane”—a film whose influence hovers in the background of “Torn Hearts” like so many mannequins in crumbling stage costumes—“hagsploitation” leverages a famous middle-aged actress’ star power for a horror film about the grotesque nature of aging. In the better examples, said star’s turn into psycho-biddy territory also serves as a sort of meta-narrative about Hollywood’s (or, in this case, Nashville’s) callous treatment of women in general.

Alexxis Lemire and Abby Quinn star as Leigh and Jordan, the lead singer and songwriter, respectively, of rising Nashville duo Torn Hearts. As the film opens, the pair is angling for a spot opening for a caddish pop-country singer who waits until after he and Jordan hook up to tell her that the label has opted for an “all-guys tour,” and Torn Hearts is not invited. Fed up with the boys’ club, Jordan talks Leigh into ditching a recording session set up by Leigh’s also-caddish boyfriend/manager Ritchie (Joshua Leonard). Instead, she suggests that they track down their idol, reclusive country legend Harper Dutch (Sagal), and somehow persuade her to record a song with them.

Using intel obtained from the aforementioned cads, Leigh and Jordan find Harper tucked away at the end of an old dirt road behind a pink mailbox and a wrought-iron gate overgrown with weeds. With hopeful hearts and a charming sense of naivete, they ring the buzzer and ask: Would Harper be willing to give them some advice on making it as a woman in a man’s world? The gate swings open, locking with a loud click behind them. Leigh and Jordan have an ulterior motive for their visit, and Harper has an ulterior motive for letting them in. Both will be revealed, in a vicious, booze-fueled creative and personal reckoning draped in sequins and tooled leather.

“Torn Hearts” comes from Blumhouse’s more modestly budgeted TV division, a disadvantage that shows mostly in the underwhelming SFX makeups. The production design, meanwhile, makes up for its budgetary limitations with a heavy dose of tongue-in-cheek redneck glamor: Harper’s dusty mansion—which doubles as a tomb for her sister/bandmate Hope, the Dolly to Harper’s Emmylou—is dotted with farcical details, like Hope’s fuschia urn and the ‘90s-style portraits of Hope and Harper that dominate nearly every room. But while the big hair and pasted-on Tennessee accents are delicious, they serve mostly as a backdrop for the more grounded drama between Jordan and Leigh as they struggle to overcome their differences and survive Harper’s violent, delusional scheme.

Honestly, the most disappointing thing about “Torn Hearts” is that it doesn’t fully embrace its campy potential. Compared to the setting, the performances are restrained, and Sagal in particular stays naturalistic even when the script goes over the top. And given the potential for mockery inherent in the “hagsploitation” formula, it makes sense that Grant didn’t want to turn her actors into caricatures (if, indeed, that’s the reason for the disconnect). But then why have eyeballs floating in jars full of fluid that's the color of cotton candy, and Sagal proclaiming that she’s got “the right accessory for any outfit” right before she grabs a hot-pink shotgun from her wallpapered closet?

If “Torn Hearts” had pushed itself a little harder, it could have ascended into camp heaven, and maybe become a cult classic. As it stands, it’s an unapologetically high-femme distraction that’s better than your average Lifetime thriller. Sure, it’s got its clunky bits, but those only make it better suited for a night on the couch with sweatpants and some rosé. 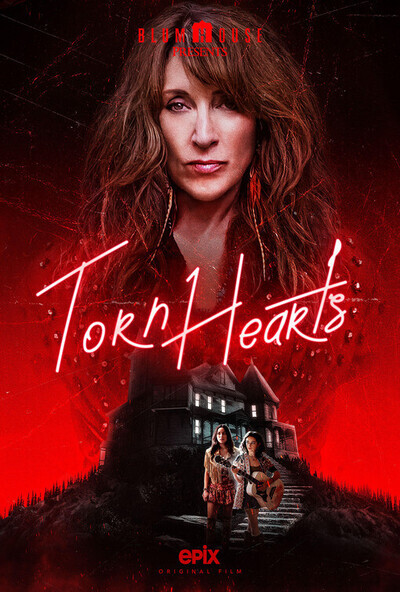