To All the Boys: P.S. I Still Love You

The end of “To All the Boys I’ve Loved Before” was downright John Hughes-ian, including a big kiss between Lara Jean Song-Covey and Peter Kavinsky on a football field meant to echo Judd Nelson’s pumped fist at the end of “The Breakfast Club.” Depending on the viewer, this was either a major victory or a loss; a sequel could only provide the threat, or hope, that another boy would pop up in Lara Jean’s life. “To All the Boys: P.S. I Still Love You” takes place seemingly weeks after the original, and because it’s a solid enough teen rom-com that addresses the challenges that come after attraction—the relationship—its enjoyment will depend largely on whether you want Peter to be the main boy that Lara loves, or not.

The movie starts with footage that will please those who want more from Lara Jean (Lana Condor) and Peter (Noah Centineo) together, their first date. He takes her to an Italian restaurant, and after Peter gets overly zealous about having two forks (so that he can drop one on the floor), the collective air gets even stranger. “This is my first date—I’ve never been a girlfriend before," Lara Jean confides. "I hope I’m good at it." Maybe this is sweet on the page (or in Jenny Han's adapted novel), but it leaves a strange feeling in your stomach. And it becomes apparent that while Lara Jean is going to try hard to be his good girlfriend (even changing parts of who she is), he's not going to do many special things for her, despite his extensive boyfriend experience dating Lara Jean's ex-friend Gen (Emilija Baranc). Condor's charming performance is a vital source here, as she takes us past Lara Jean's uncomfortable dutifulness by making us root for Lara Jean and the other parts of her life.

In between its 30-some odd lush pop song needle drops, and among its aggressively teal color palette from director/cinematographer Michael Fimognari (this movie is even more teal and pink than director Susan Johnson's first film, which Fimognari shot), the story has plenty for those who are not rooting for team PK + LJ. Just as Lara Jean caught Peter’s eye when he received a love letter she never meant to send him, a sixth grade crush named John Ambrose McClaren (Jordan Fisher) received one, and has written a beautiful one back. But before Lara Jean can brush it off, he appears at the retirement home where she’s volunteering. Fisher conveys how John Ambrose has eyes for Lara Jean with flashed smiles, which neatly slide into any reference he can make to the bonding moments they shared years ago.

The script (from Sofia Alvarez and J. Mills Goodloe) makes a strong case as to why John Ambrose (He’s well-spoken! He can play a romantic ditty on the piano while talking!) would be better for, nay, more deserving of Lara Jean. They even share an adorable Halloween costume memory, which pairs the wit of the Lara Jean and John Ambrose more than whatever it exactly is that bonds Lara Jean and Peter. While Lara Jean and John Ambrose are working a bingo game together, they realize that they're "lame in a cool way." The connection is adorable and as obvious as the movie's later machinations to protect the on-screen relationship between its two big stars, Condor and Centineo.

The better parts of this movie, as one might surmise, happen outside of the Lara Jean & Peter predicament. John Corbett has a few sunny scenes as Lara Jean's dad with a possible new love interest, and since this sequel so deeply takes after the wholesome ambling of a “Gilmore Girls” season, it doesn’t rush to tidy things up. Even better, the story has a few nice twists when addressing Lara Jean’s past relationships that are not romantic, but are even more definitive about where she is now, and who she hangs out with. It's more inspired than the slightly amusing comedy, which sometimes pops up from the retirement residents, or the brief interactions that Lara Jean has with her sweet friends Chris (Madeleine Arthur) and Lucas (Trezzo Mahoro).

But then there’s Peter. He does numerous things to disappoint Lara Jean, and in his soft-spoken approach Centineo plays them like they're all honest mistakes. Peter's bugaboos go from accidental—not texting that he was going to be hours late—to recklessly stupid, to a major dating infraction that involves plagiarism. Yes, the movies are meant to concern being young and all the bad choices that come during it. But "To All the Boys: P.S. I Still Love You" is alarmingly sincere about selling Peter to viewers as more than he shows himself to be.

These two movies are about hindsight painting a bigger picture, and maybe in the fifth, sixth, or twelfth inevitable installments Lara Jean will see her relationship with Peter for all of the flaws these films try to sugar coat. But for now we can at least wish the best for Lara Jean, whose two adventures so far leave you wanting to know more about her. We know from sporadic voiceover references that her fantasies have been shaped by romance novels, and that she's a great baker. But when she talks about college, you have little idea of what she's working toward in life. Condor's performance has a sense of wonder behind it, of Lara Jean gracefully finding her way through new experiences, and the film applies to it this guy? It’s hard to get past the hope that Lara Jean will someday soon get something better—a better boyfriend, and a better movie. 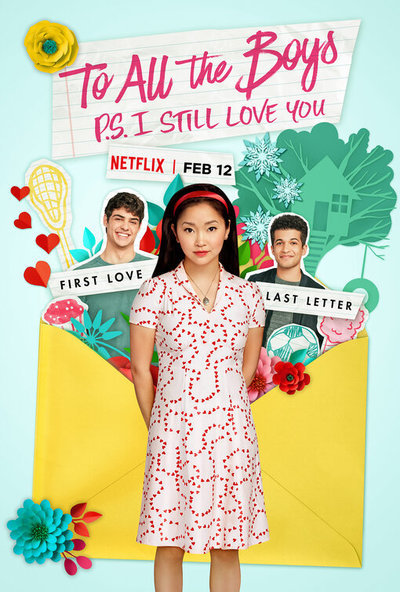