In an interview with Vanity Fair, Alan Yang, well-known to audiences from his work as a writer/producer/actor on such hit series as "Parks and Recreation" and "Master of None," spoke about "Tigertail," his narrative feature debut as director and writer. The deeply powerful and personal film is based loosely on his experiences as the child of immigrants, as well as what his father went through, coming to the Bronx from Taiwan to find opportunities. In the interview, Yang said: “My dad grew up impoverished and was living in one room in the rice fields, and had a single mom who had three boys and worked in a sugar factory. And his son is now talking to Vanity Fair about a movie he directed. That’s one generation!” "Tigertail" captures the astonishing width and depth of that generational journey by focusing on one man's attempts to come to terms with his childhood memories, as well as attempting to understand (or even acknowledge) all he has lost. This journey helps him understand what is happening in the present moment.

There is a little awkwardness early on, as the back-and-forth structure is established, but considering the film overall, such a criticism sounds like a nitpick. (And it is.) "Tigertail"'s first scene unfurls Terrence-Malick-style: a little boy runs through green-golden fields of rice, thinking he sees his mother in the distance. But, as the elderly man's voiceover tells us, his mother left him with his grandparents so she could find a job in the city. She would return for him, she promised. The camera follows the small child as he runs, bounded in on all sides by waving green, calling out to the mirage of his mother. At home, his harried grandmother hides him in a cupboard when soldiers show up at her door unannounced. Looking for "dissidents," they remind her to speak Mandarin—it's "policy" now. Since it is illegal to stay anywhere without registering first, the presence of her grandson endangers them all. Afterwards, the little boy cries about he misses his mother and his grandmother scolds him: "Be strong. Don't ever let anyone see you cry."

Good advice in that particular context, but stretched out over a long and tumultuous life, the same advice traps Pin-Jui (Tzi Ma), and traps those he loves. The thing that made him a survivor as a child isolates him later. (This is one of the film's many insightful points). As an elderly man, watching his American-born workaholic daughter Angela (Christine Ko) struggle with a breakup, he has no idea how to relate to her except as a stern exacting father. She needs something more now, she needs comfort, not judgment. He can't give it. The two are totally estranged. How did it come to this?

"Tigertail" floats back and forth between the present and the past, an effective device that creates comparisons, often painful, between Pin-Jui's hopes as a young man and the disappointments and hardships of the years following. The young Pin-Jui (Hong-Chi Lee) dreams of getting to America: he will make a lot of money so he can support his mother (Kuei-Mei Yang). The two work in a factory together. The work is hard. Mother and son are very close. At night, he goes out to a bar and dances with his childhood friend Yuan, the Taiwanese pop songs on the record player will become important talismans for Pin-Jui later in life. There's a beautiful scene when the two young lovers sit by the river at night, post-coitus, relaxed and friendly, singing Otis Redding's "Sitting on the Dock of the Bay" together. It's a perfect evocation of innocence, joy, young love, hope. But when Pin-Jui's boss says he will finance Pin-Jui's move to America, but only if Pin-Jui marries his daughter Zhenzhen (Kunjue Li), whom Pin-Jui barely knows, it's an offer the young man just cannot refuse. The desire to support his mother is too strong. He and his new wife move to the Bronx, where life is confusing, chaotic and lonely. The young married couple barely know one another.

How all this plays out, with the love and care Yang has put into every detail, makes "Tigertail" sneakily powerful. As the details mount in the flashbacks, the rhythms of present-day Pin-Jui's life are illuminated as having a specific source. We understand now. There's a reason he's stoic, there's a reason he's so goals-driven he yells at the child Angela for messing up during her piano recital. He gave up a lot to come to America, and what he gave up cannot be replaced. But remember his grandmother's admonition. Pin-Jui cannot allow himself to grieve what he lost when he left Taiwan. No time for that. On the flipside, growing up with such a father has scarred Angela. She never measured up. She knows nothing of his life before he came to America. She has no idea why her parents divorced.

All of this is presented in an open way, accentuated by sensitive specific performances. Yang's script is thoughtful and precise: every character gets to be three-dimensional. Although the point of view is always Pin-Jui's, Yang understands Angela's hurt, her yearning for her dad's love. But Yang also honors Pin-Jui's sacrifices and regrets, what he had to give up in order to give his children a better life. It is right to honor such men and women. They are the texture of American life. 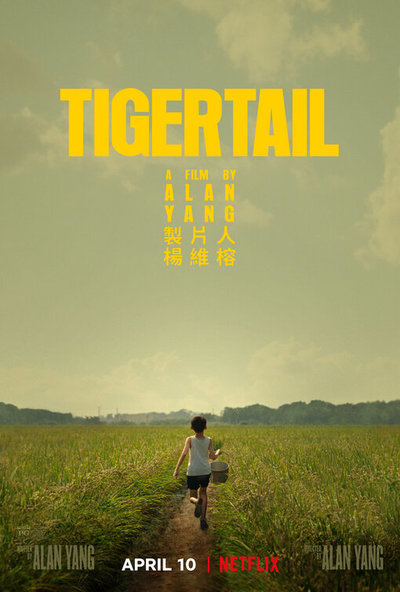