If you know how many minutes there are in a year, if you recognize at least eight of the Broadway legends who are having Sunday brunch in a diner scene (and if you have seen some of them on stage), and if you are delighted that said diner scene turns into a musical number about ... Sunday brunch, then you will adore “tick, tick...Boom!” a love letter to Broadway musicals and the artists who create them. It's a musical about making a musical based on an autobiographical one-man show by Jonathan Larson, the astonishingly talented writer/composer of “Rent,” who died just before the show’s opening night.

It is also a tribute, and an expression of gratitude, for the almost baton-like passage of support from those who Larson describes as a vanishing species, the creators of musical theater. Larson’s thanks include the foremost musical theater artist of the 20th century, Stephen Sondheim, an early mentor, played in this film by Bradley Whitford. (Sondheim was passing along the help he received from another Broadway titan, Oscar Hammerstein.) And “tick, tick…Boom!” is also a thanks to Larson from director Lin-Manuel Miranda, the creator and star of “Hamilton," who might be seen as his successor. Miranda, who starred as Larson in a theatrical performance of this play, directs the film with a deep understanding of the passion, struggle, and ebullience of an artist committed to an art form that requires a lot of money and a lot of other people to be brought to life. This film is explicitly theatrical, going back and forth between Larson’s story and his one-man show telling the story.

Miranda saw “Rent” on his 17th birthday and it was a transformational experience, showing him for the first time that musical theater did not need to be about cowboys, Austrians escaping the Nazis, or the merry murderesses of 1920s Chicago. They could be stories of the kind of people Miranda saw every day. A couple of years later, while he was still in college, Miranda began creating the Tony Award-winning “In the Heights,” set in the neighborhood where he grew up.

Larson (Andrew Garfield) was not so quick to understand that his environment could be the source for his work. “tick, tick…Boom!” begins as he is about to turn 30 and is still struggling with a dystopian, futuristic sci-fi musical he has been working on for eight years. It is about to get its first workshop production, which is thrilling and terrifying, especially because he has not yet written the crucial second-act solo for a character named Elizabeth that is the show’s turning point. Also, he has no money, his best friend and roommate is moving out, his girlfriend needs to know if she should accept a job in the Berkshires, and his close friend is in the hospital with AIDS, the same disease that has killed three of his friends, all in their 20s. The title of the film refers to the pressure he feels internally and externally. Like Keats, he has “fears that [he] may cease to be before [his] pen has gleaned [his] teaming brain.” There is so much inside him that he wants to share. Music bubbles up from him like water from a geyser. He even writes a silly little song about the sugar in the diner where he works as a waiter.

Garfield deftly conveys Larson’s feeling of urgency and the mingled confidence, ambition, and frustration of an artist who has so much to say, and yet has to deal with the realities of everyday life, including letting down the people who have given so much to support him. He wants to put his views about what is going on in the world into his work, but as someone reminds him, while he may think he has a lot to say, he's not out there saving the rainforest. But when he stands in front of the cast for his first workshop production and tells them they are now part of the family, we see him step into the self he has been bursting to become, like a musician finally given an instrument to create the sounds he needs to share.

There are many foreshadowings of “Rent,” so many it seems like a rough draft for the now-iconic musical. There’s the friend he accuses of selling out and the devastation of AIDS and fury over the inadequate response. (This is especially resonant in the midst of the COVID-19 pandemic.) Larson’s electricity is turned off and he has to light a candle. Then there's his answering machine message, the name of one of his friends, the girlfriend who is a dancer, a meeting with business people who have a lot of money to offer but don't understand what really matters—even the songs have hints of the melodies from “Rent.” His “Sunday” song, though, is a nod to Sondheim, whose “Sunday in the Park with George,” like this a story of creating art, is glimpsed in the film.

Some people will be frustrated by Larson’s sense of his own importance and neglect of those around him. But theater kids of all ages will appreciate that it's not his own importance he's excited by, so much as the importance of the stories he wants to tell, even if they are not yet Tony-worthy. 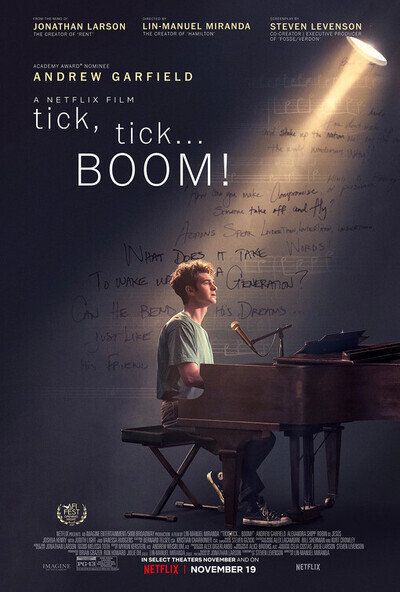 Rated PG-13 for some strong language, some suggestive material and drug references.

Writer (based on the musical by)