Pat Keily’s rom-com “Three Night Stand” is an ensemble picture, with the unmistakeable feeling of a French farce, or a comedy of manners with eccentric secondary characters moving in and out of the action; doors slamming up and down hallways; intrigues and sexual romps going on in claustrophobic quarters. The French farce aspect of the film is its true heartbeat. These characters are not really serious people, and it is difficult to take any of them seriously. That’s fine, it gives “Three Night Stand” its special lunatic edge. But when it asks us to invest in Carl and Sue, the two lead characters, the story falters. Carl and Sue’s relationship is so general, and so unformed, that the film doesn't appear to have a clear grasp of what it is really about.

Carl and Sue (Sam Huntington and Meaghan Rath) are a married couple on their way to a winter weekend at an isolated B&B in Quebec. He is a frustrated game designer, and she is so beautiful that people stop dead in their tracks to comment on her looks. It happens a couple of times, showing that Kiely has conceived of Sue in an extremely limited way, not caring to give her a personality or some traits that would explain who this woman actually is. Rath does the best she can to humanize Sue based on the little information she is given. Although Carl and Sue both seem extremely young, they have been married for some time, and are on autopilot, bickering and having bored or unsuccessful sex. Turns out Carl is haunted by a woman from his past named Robyn. Carl has never told Sue about Robyn, but then it turns out, amazingly, that Robyn (Emmanuelle Chriqui) owns the B&B where Carl and Sue will be staying! What a coincidence! Awkwardness ensues, especially when Sue figures out that Robyn and Carl have a past, and, worse, that the couple used to come to this very same B&B for sexy-times getaways.

Meanwhile, the other characters enter the scene. Also staying at the inn is a somewhat famous young French actor named Anatolii (Aliocha Schneider), traveling with his cougar-ish elegant mother (Anne-Marie Cadieux). Sue recognizes Anatolii immediately from his films and gushes over how much she loves him, igniting Carl’s jealousy. Anatollii drones on about how he is on his way back to France to star in a Catherine Breillat film: Sue gasps in admiration, Anatolii’s mother nods serenely, Carl rolls his eyes. Rounding out the cast of screwballs is another married couple, friends of Carl’s, Stacey (Reagan Pasternak) and Doug (Jonathan Cherry), who crash the weekend unexpectedly, barging in with oversharing monologues about their yeast infections, their sex lives, dispensing terrible advice to everyone.

Over the course of the weekend, these seven individuals go skiing, have sex, make maple syrup, argue, careen around on Ski-Doos through the forest, do yoga angrily. As the relationships start to fracture, en masse, the film hits its stride. Keily has a good ear for dialogue, and a nice sense of the absurd. Sue, in telling Carl how “on” she has to be in their relationship, says, “I feel like I’m in a Broadway play. And it’s been running for three years.” It’s a funny script, although the plot requires a series of coincidences so unbelievable that Keily actually spends time trying to justify them (thereby calling attention to them even more).

The real problem is that Carl and Sue seem like bit parts in the fascinating dramas of other people. Why did they hook up in the first place? What bonds them together? What will be lost if they don’t “make it”? They bicker like siblings, and it’s hard to feel that there was a relationship there as a foundation at all. Both Huntington and Rath are capable actors, and they do nice work, but Anatolii and his mother, Stacey and Doug, even Robyn (who shows a dark strain of dissociation underneath her smiling capable surface), have more life, stronger objectives, and higher stakes than either lead character.

“Three Night Stand” is refreshingly unsentimental in a lot of respects, and gimlet-eyed about romantic relationships, rare in the genre, but the film lacks a strong center. 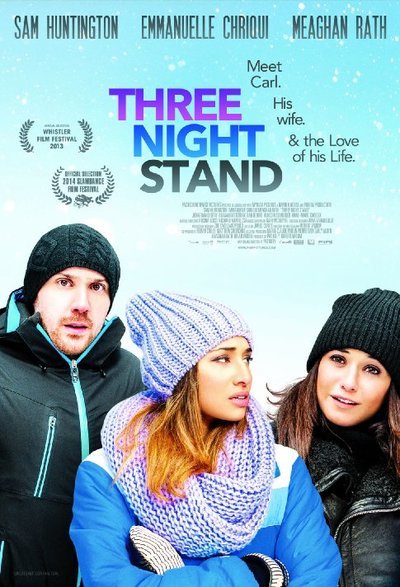