For some measure of the progress of women, consider "1000 Pieces of Gold," set in the 19th century and telling the story of a Chinese woman sold from man to man as if she were property. The film is based on the little-known fact that years after slavery was abolished in America, Asians were still held in involuntary servitude - sometimes by their own people. Inspired by true stories, the movie is angry and impassioned, but it is also, somewhat surprisingly, a romance.

Rosalind Chao, an actress of great character and presence, stars as a young woman named Lalu, born in China where girl babies were not highly valued, and sold by her father to a Chinese "wife-trader" (Dennis Dun). He brings her to America and sells her as a wife to Hong King (Michael Paul Chan), another Chinese man, who runs a saloon in a dismal backwater settlement in Idaho, and plans to use her as a prostitute. Lalu reacts to his plans violently, with a knife, refusing to prostitute herself, and Hong King wisely observes that she does not seem cut out for the profession.

Lalu's innate self-esteem is her only protection in the wilderness. American laws deny Chinese men citizenship - they are wanted mostly for cheap labor - and women are viewed as even more insignificant. Lalu, nicknamed "China Polly" by the cowboys who cannot be bothered to pronounce her name, is saved from prostitution but then becomes Hong King's slave, until her husband's white partner, a genial alcoholic named Charlie (Chris Cooper), explains to her that slavery has been outlawed.

Charlie, a good man when he doesn't drink too much, is attracted to "Polly," but she dreams only of buying her freedom and returning to China. Then Hong King, short of funds and tired of living with a "hellcat," decides to auction his wife to the highest bidder - and Charlie, in a rare stroke of luck, wins her. She lives with him, but in fierce chastity, until Charlie is shot in an anti-Chinese race riot, and as she nurses him back to health she falls in love with him.

Meanwhile, the wife trader, whose conscience has been bothering him, returns to the mining camp with enough money to buy Lalu's freedom. He hopes to marry her and take her back to China, but, seeing her living with a white man, he considers her hopelessly damaged and abandons his plans.

I gather that this development, like most of the film, is based on fact, but as a consequence "1000 Pieces of Gold" paints an overwhelmingly negative portrait of Chinese men - from the father who betrays her, to the trader who sells her, to the saloon keeper who wants to prostitute her. The only man portrayed positively in the film is Charlie, the white. There must have been good Chinese men in America in those days, but you will not meet them in this film.

The story is told with power and high drama, however, and the love that grows between Lalu and Charlie, like all loves that smoulder for a long time, becomes a great passion. And Rosalind Chao's performance is a wonder - the sort that, in a conventional Hollywood epic, would inspire Oscar speculation. She gives us a character who begins as a child in grief and confusion, and prevails in a strange land until she is finally able to stand free as her own woman. It's quite a story. 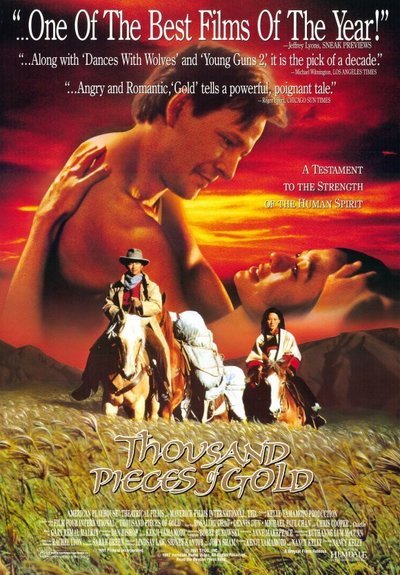