This One's for the Ladies

Don’t bust out the mixed drinks just yet: “This One’s for the Ladies” might start with gorgeous, nearly nude black men stripping for some very smitten women, and yet this NC-17 documentary isn’t as straight-forward as that, in a self-defeating way. This one is also about the ladies, as its passages celebrating the tippers' dedication to their communities indicate, but it doesn’t have a rich enough storytelling vision to pull off something that feels good for both the soul and the you-know-what. “This One’s for the Ladies” is just too much of a clumsy mess to be a good time.

Instead of building anticipation with its enticing focal subject, Gene Graham's “This One’s for the Ladies” establishes itself and its lack of game with an info dump: mixing footage of New Jersey’s Nasty Boyz stripper roster at work with too-casual interviews featuring the performers and the women who love them. Graham polls women like Poundcake and C-Pudding about how they came to be fans of various Nasty Boyz, and establishes that these women just want to have a good time. The strippers share how they got into the business as well, like original Nasty Boyz Raw Dawg and Tygar, as the brothers talk about launching their stripping careers. Even the MCs for the event offer their experience, like when a woman named Sweet Tee speaks from the backseat of a car about her job in getting women riled up to splatter bills on the sweaty performers. In place of an intoxicating narrative focus, “This One’s for the Ladies” gives you a history and business lesson with some visual examples you’ll wish you could study longer.

It’s interesting to hear a man named Fever talk about his motivation to be the first male in his family’s generation to go to college. He’s incredibly charismatic on and off-stage—that’s before he giddily shares his collection of Superman paraphernalia—and just one of the engaging people who are shown to be more than their job. These passages create character, and enrich the people on screen the way that “Magic Mike” made sure to emphasize its title character’s passion for furniture design, just as much as stripping. Maybe those who plainly look down upon stripping and enjoying such an act will see this footage as a wake-up call, but for everyone else, the doc has the weak function of simply showing you good-hearted, sexy and sex-interested people, and their shared affection for this art form.

At times, “This One’s for the Ladies” is able to negotiate its talk-heavy, ideologically-scattered way with the goods: inserted footage of wet, muscular, gyrating bodies. We don’t get full dance sequences, but there are many different performers: A man named Satan, who talks about how he wooed new fans with his name, and singlehandedly bestows this doc the rare NC-17 rating; Mr. Capable, with his penetrating eyes; a woman stripper named Blaze who talks about the way she entices women and men; a man simply known as “Black Ice.”

But halfway through the movie, Graham flips the proverbial lights on, and literally takes us to church. You go from the the intoxication of admiring Satan’s natural gift to watching C-Pudding lead a group of kids in a church choir, and it’s enough to make you instantly sit up straight, or at the very least, uncomfortable. Graham then shows the women in other admirable roles: C-Pudding goes to Washington D.C., to protest with other mothers against police violence; Poundcake organizes an event in a church basement meant to feed the homeless people in her community. There are other moments passages later that touch on America's inherent inequality, and subsequent value for black lives, but the movie is already so unfocused that these doesn’t make the film deeper, just more tonally broad. It’s not fun to see such heartfelt efforts end up like an act that doesn’t fit with the rest of the roster.

Graham ends up under-developing both halves of the movie’s brain, the horny half and the more thoughtful half, and can’t unite them with a sense that it’s all just a weekend in the life of the doc’s subjects. The closest he comes is with an Autism benefit—a woman named Michele organizes it and men like Mr. Capable, Raw Dog, and Tygar bring their magic for a cause beyond entertainment. As Michele and Mr. Capable embrace outside the dance floor, you get the sense of a community that goes beyond her simply ogling his firefighter-themed calendar page. But even this isn’t a pivotal sequence so much as another one in Graham's arc-less film, just as there's hardly any main perspective, only a rotation of them.

The filmmaking leaves much to be desired: it’s not just the talking head interviews, which look like they’re filmed to get them over with instead of developing characters, that are cinematically limp. Graham’s camera often merely observes the albeit captivating performers and the women they rile up, all with little artistry of its own. It feels far too often that Graham isn’t making a statement about what’s happening, so much as documenting a stripper’s inherently intimate expressions with a camera bigger than anyone else’s cell phone.

“This One’s for the Ladies” wants points for representing both those who wouldn’t get silver screen time otherwise, and promoting a sex positivity that emerges from really getting to know the strippers and the tippers. It gets those points. But the movie’s unsavory approach of mixing dry anthropology with bountiful titillation only proves that some films serve a greater purpose by being escapist, gratuitous, as bad as they want to be. Can’t some movies just be sexy? 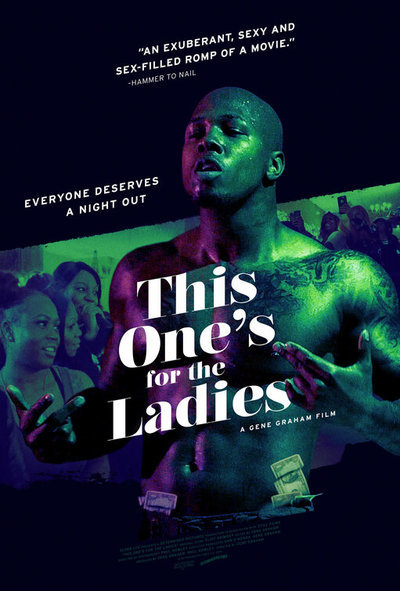