A love of spoken-word poetry—or at least a passing interest in the art form—is necessary to with the drama "Things Never Said." It is very much a fabric of the daily lives of writer-director Charles Murray's characters, as natural to them as driving down the street or having a cup of coffee.

But if this particular kind of performance is not your cup of tea (and, admittedly, it is not mine), you might find yourself resisting the journey of female empowerment and the uplift that's ultimately in store. The film's stars, Shanola Hampton and Omari Hardwick, are hugely charismatic individually and have chemistry with each other. But the soapy melodrama and ferocious, on-the-nose poems threaten to overpower their budding romance.

Still, the feature debut from Murray, a veteran TV writer and producer ("Third Watch," "Criminal Minds"), offers a slice of life we don't see enough of in films: that of a married, middle-class black couple, in all its realism and romance. Between this, "Pariah" and "Middle of Nowhere" in the past couple of years, such a setting has provided rich material for indie dramas to explore.

Hampton's Kalindra Stepney is a waitress at a soul food restaurant in the Leimert Park section of Los Angeles. But she spends nearly all of her evenings honing her craft at local open-mike nights and dreams of performing at the famed Nuyorican Poets Café in New York. She's never been east of Bakersfield, but with her intense, mesmerizing eyes and strong, grounded demeanor, there's no doubt she'll get there someday.

But her husband, Ronnie (Elimu Nelson), is too busy feeling sorry for himself to be supportive of her. A former high school basketball star now working at a gas station after a career-ending injury, Ronnie wallows in what could have been. He's never even bothered to see his wife perform on stage.

Murray efficiently and fluidly uses a montage to explain how they got to this distant state: high school courtship, pregnancy, marriage, fighting, physical abuse, miscarriage and finally, silence.

So it's no wonder that Kalindra finds herself receptive to the advances of a charming, fantastic-looking regular in the audience who's such a fan, he can recite her words back to her. (The fact that he's such an unabashed groupie of hers, in a reversal of traditional gender roles, is a nice twist.) At first she's dismissive of the hunky, tattooed Curtis (Hardwick), but quickly it becomes clear that he can provide her with all the love she's been missing.

And it just so happens that he's an aspiring poet himself. Reminiscent of the conceit in the excellent and inventive musical "Once," in which Glen Hansard and Marketa Irglova would just begin performing in the midst of conversation rather than bursting into song, Kalindra and Curtis craft poems for each other during quiet, intimate moments as a means of foreplay. It's an extension of who they are and how they relate to each other; it's also a rather quaint, romantic notion for such a contemporary setting, this idea that poetry is all around us and we just need to open our ears to its rhythms.

Still, we must ask ourselves whether we're OK with the fact that Curtis moves in on this married woman with no qualms about the repercussions; we must decide whether we can still root for him, and for them. The fact that he's so dreamy in every way—he even deals with his own personal baggage with maturity and honesty—and that Kalindra's husband is such a pouty, volatile, overgrown child makes the decision pretty obvious, and saps "Things Never Said" of much of the romantic tension it might have built.

Instead, Murray attempts to achieve drama through gossip and disapproval. The cycle of who-knows-what-about-whom includes Kalindra's wisecracking best friend (Tamala Jones), who's in her own questionable relationship, and her mother (Charlayne Woodard), who made excuses and sacrifices for her own husband's behavior to keep the family together. Much of it feels like perfunctory wheel-spinning before the inevitable happy ending.

Kalindra, as we know, has to roar. She has to assert herself with every fiber of her being. Ronnie is dismissive of Kalindra's passion, referring to it as "all that mumbo-jumbo, half-rap s--t." And as much of an idiot as he can be, he does sort of have a point. Much of the poetry is painfully self-serious, contains clunky metaphors and features graphic, profane imagery ostensibly, as a means to shock us.

But Hampton is such a force, she finds raw power in her character's climactic—and cathartic—moment of self-realization. By that point, nothing is left unsaid. 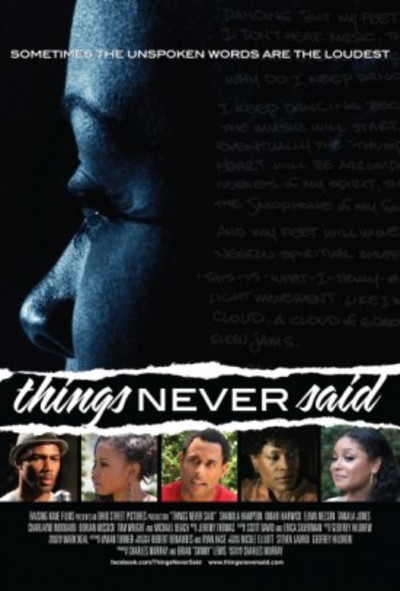 Michael Beach as Will Jackson