Roxanne Benjamin's "There's Something Wrong with the Children," being unceremoniously dumped on digital and the newly rebranded MGM+ today, four days after a big horror drop day—look out for Tuesday the 17th!—is a film with interesting ideas that keeps faltering due to shoddy execution. It takes WAY too long to get anywhere interesting—at times, it feels like a script that would have suited an anthology format like "Guillermo del Toro's Cabinet of Curiosities" better than a feature's length—and then it races through some of its best beats, eventually allowing them to sink under the weight of behavior that doesn't feel recognizable as human in the final scenes. The midsection of Benjamin's film, when one character knows something is terrifyingly wrong, and no one will believe him, is easily the strongest, turning the common fear of not being ready to be a parent into something literally horrific. There's not much wrong with this film on paper—there's just something wrong with the execution.

The script by T.J. Cimfel & David White has a smart set-up—two couples go on a camping trip together to drink, maybe get a little high, and leave their problems at home. Of course, that last part is the hardest, and Ellie (Amanda Crew) and Thomas (Carlos Santos) have brought some marital tension with them. Ellie reveals to her friend Margaret (Alisha Wainwright) that she recently had a foursome with another couple, and, well, it didn't go as planned. To help the couple resolve their issues, Margaret and Ben (Zach Gilford) agree to watch their friends' kids, Lucy (Briella Guiza) and Spencer (David Mattle), for the night. Maybe it will help push them to have kids themselves? They've been dragging their feet in that area, partly because of mental issues that Ben has recently fought. When are you actually ready to have kids? No one is ever 100%. And Cimfel & White use that common anxiety as a starting point, but the script doesn't take enough advantage of it, turning it into something more predictable than it could have.

After a half-hour of mostly character-driven set-up, things get weird when Margaret and Ben wake up to find the kids missing. The day before, the entire crew had found an old building with a massive hole in it that seemed to attract the children. Ben presumes they went to investigate it again and races there, only to find them on its edge. He watches them jump in, surely to their death. If that isn't traumatizing enough, he returns to the cabins to find Lucy & Spencer running around like nothing is wrong. Only Ben knows something is very wrong.

It's a sharp premise for a horror movie, and the midsection of "There's Something Wrong with the Children" is well done in how it plays with perception. Of course, no one would believe Ben's story that the kids aren't what they appear to be. And Guiza and Mattle are fun in this act as they play games with Ben's mind, sending him over a mental edge. However, even here, it feels like Benjamin and the writers aren't living up to the potential of their first act, and not just because the bland Gilford doesn't seem to be up to the challenge of a role that should quickly dial up to unhinged. We should be allowed to simmer in Ben's predicament, questioning what we would do in that situation and how it would deteriorate our grip on reality.

Instead, "There's Something Wrong with the Children" hurtles into a final act in which you realize that Santos wasn't ever given a character, and you don't care enough about Ellie or even Ben to be concerned about what happens to them. Perhaps knowing the imbalance in the ensemble, Benjamin shifts the protagonist role to the best performer in the film, Wainwright, who has to play concern, terror, and abject grief as she believes her husband has completely, dangerously lost his mind. She's the best thing about "There's Something Wrong with the Children." I started to hope she would jump into the mystery hole and respawn in a movie that knew what to do with her.

On MGM+ and On Demand today. 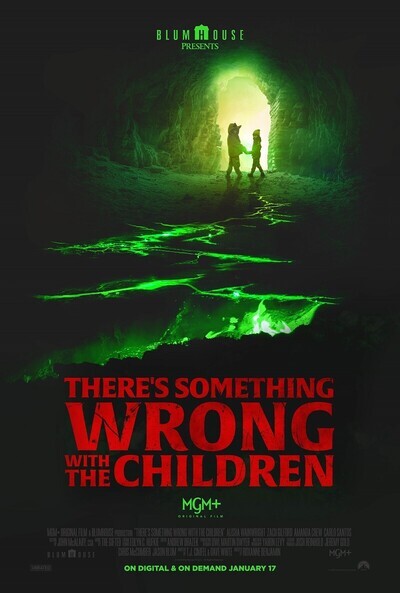 There's Something Wrong with the Children (2023)