The Young and Prodigious T.S. Spivet

This weekend, "The Young and Prodigious T.S. Spivet," the latest comedic-fantasy by French filmmaker Jean-Pierre Jeunet, was quietly dumped into two handfuls of theaters across the country. The film's current release is minuscule because Jeunet reportedly refused to make cuts that were suggested by notoriously difficult distributor mogul Harvey Weinstein (for more details, check out Sam Adams's Criticwire piece on the film.). This distribution debacle is especially disheartening because "T.S. Spivet" is too small of a movie to shoulder the weight of any kind of controversy. The film follows Spivet, a ten year-old inventor from Montana who travels to Washington D.C. to accept an award from the Smithsonian Institute. "T.S. Spivet" is a messy, warm comedy about grief, family and imagination. It's also ironically about being seen and rarely heard. But while some of the film's wide emotional turns—from over-caffeinated road movie to magically-realistic melodrama and back again—are not handled with care, the film is more than the sum of its unequal parts.

At the start of his adventure, T.S Spivet (new-comer Kyle Catlett) is kind of annoying. He eagerly shows viewers around his family's ranch, regaling us with stories about his emotionally distant cowboy dad (Callum Keith Rennie), and emotionally unavailable scientist mom (Helena Bonham Carter). It's not immediately clear why Spivet's family doesn't notice when he hops a train to the other side of the country. But everything, particularly the film's frequent, elliptically edited flashbacks, snaps into stark relief once Spivet reveals (In an early scene! Not a spoiler!) why he's really running away from home: brother Layton (Jakob Davies) died in an unfortunate accident, and Spivet has never forgiven himself for it.

Everyone in the film is touched by Layton's death, even people who didn't know him since Spivet's actions are defined by his grief. But again: in the beginning, Spivet is kind of annoying, thanks in no small part to Catlett's shaky performance. Many of the jokes featured in the film's first half hour concern the difference between Spivet's whimsical surroundings, and his sophisticated, eccentric perspective. Catlett consequently has to deliver a lot of voiceover narration that gives us a direct line to his unbelievably naive, but over-heated imagination. Some of Catlett's dialogue is toxically quirky, like the scene where he identifies three different routes he could take to cross his family ranch—just to answer the phone. And a lot of Catlett's dialogue is too emotionally nuanced for an inexperienced child actor.

I use "nuanced" in a general sense here. Catlett is most consistently well-used when he's treated as a kid-shaped cypher. He does all of his best acting in silhouette or profile, as in the scene where Spivet fantasizes about calling home while he's on the road. Spivet runs the scenario through his head, but stops right before he gets into an adjacent phone booth. We watch Spivet stare at the phone box from over Catlett's shoulder, then see Catlett beat a hasty retreat. Compare this scene, one of the film's best, with the scene where Spivet visits Layton's room just before he leaves home. Catlett's aw-shucks kiddy tics put a saccharine spin on an already painfully naive speech, making it impossible to take a crucial scene seriously. But while the scene's inherently hard to stomach, it's failure to connect is also partly Catlett's fault.

Then again, the film's approach to semi-serious melodrama is consistently all-over-the-map. Spivet's family members are all, in their own way, getting over Layton. But Layton's absence is presented in broad, uneven strokes. The film is best when capable performers like Carter and Niamh Wilson, the latter of whom plays Spivet's perpetually-exasperated teen sister, speak louder than the film's contrived scenario and affected dialogue.

Likewise, "Spivet"'s climax puts a lot of the film's more annoying habits into perspective, but it doesn't make up for everything. Take for example the scene where a railroad-riding hobo (Jeunet regular Dominique Pignon) tells Spivet a tall tale about a sparrow and a pine tree. On the one hand, the hobo's story illustrates one of the film's main themes as it's baldly expressed in an earlier scene: science starts where imagination ends. On the other hand, Pignon's line-delivery is unintentionally stilted, presumably because English is his second language. In order to enjoy this scene, you have to be more invested in the idea of the scene than the actual scene itself. You similarly won't get much of an emotional charge out of "The Young and Prodigious T.S. Spivet" otherwise, but you'll probably find the effort worthwhile. 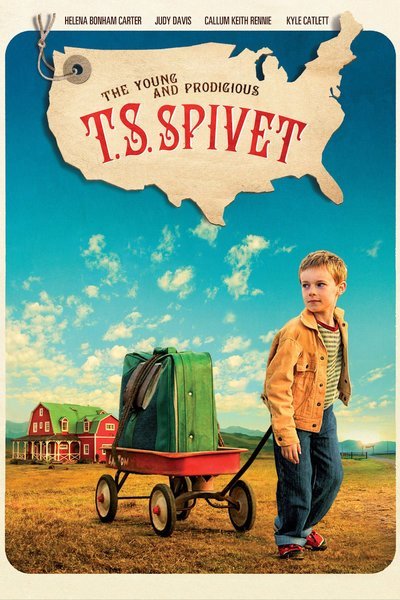