The Year of Spectacular Men

A good-looking yet slim and meandering hybrid of a romantic comedy, family drama and coming-of-age story, “The Year of Spectacular Men” is most impressive with the nature of its behind-the-scenes construction. There is undeniable warmth-by-design in watching the relatable personal chaos of a twenty-something, as she engages with her sister and mother, in a film starring real-life siblings (Madelyn and Zoey Deutch), written by one of them (Madelyn Deutch), directed by their mother (the renowned Lea Thompson of “Back to the Future”) and produced by their father (veteran filmmaker Howard Deutch). Yet somehow, this familial occasion never quite brings the kind of inherent sincerity expected from it onto the screen. While Thompson’s film makes some insightful observations on the taxing demands the society makes from struggling recent graduates (and by extension, the unique pressures young people put on themselves), its remarks about shaky, modern-day relationships don’t feel particularly fresh or earnest. A curiously labored sensation not only holds back the film’s uncertain humor (perhaps taking aim at gluten-free eating habits or hipsters’ love of quinoa is not all that funny anymore), but also narrows down the emotional range of the story.

“The Year of Spectacular Men” lures the viewer into its tale with an all-too-familiar Woody Allen-esque ease that sets the voiceovers and monologues of a number of exasperated male figures against the backdrop of nostalgic New Orleans jazz. These are men who have, at some point in their lives, dated the charmingly neurotic Izzy Klein (Madelyn Deutch) and seem to have some mansplain-y thoughts on her, which serve as an introductory prologue for the viewer. At the top of the eventful year teased in the title, the first mediocre man we get to meet is Izzy’s longtime boyfriend Aaron (Jesse Bradford), who breaks up with her unexpectedly on the heels of her blah college graduation, using Izzy’s purpose-free life as an excuse. (Spoiler: Aaron, arrogant and consequently annoying, is no picnic himself.) Taking this opportunity to move back to Los Angeles with her famous Hollywood starlet sister Sabrina, (Zoey Deutch, alluring and effortless as ever), Izzy decides acting might be her calling card.

But LA doesn’t necessarily welcome the frazzled Izzy with open arms, either. A string of predictable audition failures eventually take their toll on her, while her personal and professional troubles swell in juxtaposition to Sabrina’s blooming career and sweetly stable and mutually respectful relationship with an actor (played by Avan Jogia). Meanwhile the (mostly) unremarkable men that enter and drop out of her life—a film director, a drummer, a skier and so on (played by names like Nicholas Braun, Brandon T. Jackson and Zach Roeric, respectively)—prove to be less than spectacular and memorable, even though a pair of them display appealing qualities with honesty. Despite writer Madelyn Deutch’s incessant efforts on the page, romantic dynamics don’t quite land, while endless argumentative outbursts between characters eventually overstay their welcome. Additionally, the portrayal of Izzy and Sabrina’s free-spirited lesbian mother Deb (Thompson) and her new relationship with the younger, yoga-obsessed and health-conscious Amythyst (Melissa Bolona) feels like an afterthought, written for stereotypical laughs.

There is surely timeless value in telling stories of drifting young people, increasingly burdened by contemporary stipulations. Yet while over-packing its scope with constant motor-mouth word-matches, “The Year of Spectacular Men” forgets to deliver authentic, fully-fledged personalities we can care about (hint: Izzy doesn’t have to be likeable or enlightened to earn our empathy). Along with her cinematographer Bryan Koss, Thompson shoots “The Year of Spectacular Men” brightly, highlighting attractive colors, sunrays and that superficial but appealing positivity specific to LA. She also engages with sex frankly and delivers a number of refreshingly open sex scenes (still a puzzling rarity in mainstream American rom-coms) with a balmy touch. If only the film’s visual vividness had also colored the inner lives of its protagonists; a lively group we sadly forget about before they reach their on-screen potential. 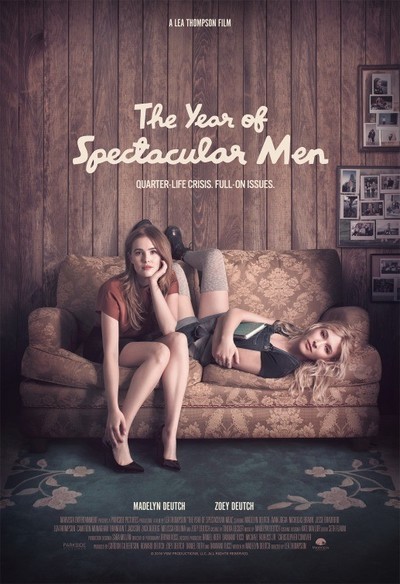