My biggest complaint about the worst of the Happy Madison movies, especially the ones on Netflix since Adam Sandler moved from a theatrical star to a streaming one, is that they’re often just depressingly lazy. Easy set-ups, easy jokes, barely a plot, zero visual style, etc. There’s some of that around the edges of the latest Netflix HM Original, “The Wrong Missy,” but there’s also the most committed and intense performance in any of these movies in a long time, and probably ever since they moved to Netflix. Too much of the humor in “The Wrong Missy” feels like the first draft of a freshman comedy writing class, and the supporting cast is filled with lazy performances of people just trying to get a ticket for the laziest HM “Vacation Comedy,” but then there’s Lauren Lapkus, throwing herself into every scene with zero fear and an engaging sense of comedic insanity. It’s almost a shame that the film overall isn’t better and that David Spade doesn’t give half the effort of his co-star—Lapkus is just good enough to show how this movie could have worked.

“The Wrong Missy” opens with a horrible blind date between Lakpus’ Melissa and Spade’s Tim. He is a relatively plain guy. He watches “The Affair,” reads James Patterson, and listens to Phil Collins. (This movie has the weirdest pop culture drops.) Missy, on the other hand, is borderline terrifying. She talks about sex openly, dips her hair in her wine before sucking on it, and carries around a knife she calls Sheila. She is the anti-Tim. He has to flee the scene by going through the bathroom window, hoping he never sees her again.

Not long after, Tim is at the airport, where he has a meet-cute involving mixed-up luggage with ... wait for it ... another Melissa (Molly Sims). The two have everything in common and end up in a janitor’s closet before her flight pulls her away. Tim gets up the courage to invite this Melissa on a trip to Hawaii on a corporate retreat to impress the new boss. Guess which Melissa he texts by accident instead?

It’s long been clear that Happy Madison and company build their projects around where the cast and their families feel like going on vacation, and this one allows regulars like Spade, Nick Swardson, Rob Schneider, and Jackie Sandler to hang out under the beautiful sun of Hawaii. Of course, it’s really a series of opportunities for Missy to embarrass Tim, but Lapkus goes well beyond your standard “annoying date” trope and walks away with every single scene she’s in. The writing often misses its mark, but there’s Lapkus keeping viewers interested through most of its worst moments (although a scene in which she vomits into a shark cage is best forgotten by all involved).

If Tim felt like even remotely a real human being instead of blank straight man for his co-star, there could have been a movie here. But Spade phones everything in, barely mustering an expression much less giving anything to his partner in terms of comic timing. And the film has that bland, TV movie look of so many of these projects. It almost feels at times like Lapkus is just interrupting a vacation movie of other actors. It’s like no one sent her the memo that she didn’t have to try so hard.

And, of course, “The Wrong Missy” progresses down incredibly predictable paths in terms of plot. Of course, Missy is going to do some good and win Tim over. This isn't a Happy Madison movie if she’s awful from front to back and literally destroys Tim’s life, although that would almost certainly be a better one. Imagine if the team here had the courage to make Missy a truly unhinged character a la real dark comedies like “The Cable Guy” instead of someone who is clearly going to win everyone over by the end and join their bland parade. Instead, what we have is a movie about a wild card surrounded by blank slates that asks us to hate her until the movie changes its mind. From the beginning, even when she’s wielding a knife and climbing under bathroom stalls, you can’t help but think she could do better than Tim. And Lapkus could do better than this movie. 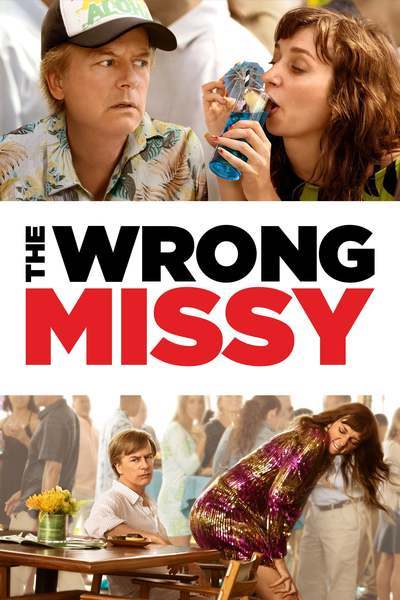