The Woman Next Door

“The Woman Next Door” opens as a simple story about two houses. They are next door to one another. The story gets a great deal less simple after we meet the inhabitants of the houses. The house on the right is lived in by Gerard Depardieu, a big, friendly lunk of a guy who loves his wife and kids. The house on the left is purchased by an air traffic controller, who moves in with his new bride, played by Fanny Ardant.

The catch is that Depardieu and Ardant were lovers eight or nine years ago. It was, we gather, a tempestuous relationship. Depardieu learns secondhand that Ardant has described him as a "violent manic depressive." Yet things look so calm on the suburban surface, as the two couples meet and exchange civilities.

The man and the woman make one crucial error, however, right at the outset. They do not tell their respective spouses about their old love affair. If they had, the situation might immediately have been defused into embarrassment, good manners, and all those other enemies of passion. But because they keep their past a secret, they bestow meaning on it. They tacitly agree that there is still a past, and that they do still share a secret. In no time at all, they're meeting in town for steamy afternoons in one of those French hotels where the concierge has seen everything.

This situation is a quintessential one for Truffaut, the French director who has successfully made more than 20 films without yet portraying a healthy, mature relationship between a man and a woman. All of his lovers are doomed by the demons of their passion, and by underlying streaks of violence (in his serious films) and frivolous inability to make a commitment (in his comedies).

Stanley Kauffman, the critic for the New Republic, bluntly observed not long ago that Truffaut only has three subjects (1) men in love with being in love, (2) women who kill men and (3) children.

There aren't many scenes with the kids in this film. But the male and the female are certainly in love with love: They seem more fascinated by the fact of their affair than by each other. And they're tragically out of sync. They cannot love each other simultaneously. Each one apparently needs to be rejected by the other to fully arouse his or her passion. (The movie has a happy ending, I guess, in that it finally ends in a tie.)

Truffaut is on record as one of the greatest admirers of Alfred Hitchcock, and “The Woman Next Door” is a profoundly Hitchcockian film, in that its real subjects are guilt, passion and terrible consequences of a sin that starts out small. (We can almost imagine Sir Alfred's ghost reciting the lesson: "You can see what can happen to you when you are not good boys and girls.") The two lovers are criminals, of course, adulterers, cheaters, liars, as practiced at concealing their emotions as a veteran con man. And, as Alfred did, Truffaut does a brilliant job of giving us surface images that are almost starkly simple, while beneath the surface there's a labyrinthine tangle of passions.

That's what's best about the film. Truffaut shows us one thing and implies another. Toward the end, his characters seem to be doing exactly the opposite of what we guess they're really doing. The superb logic of the last scene is all the more effective because, gee, we didn't know that was how she felt É but, of course, we did. 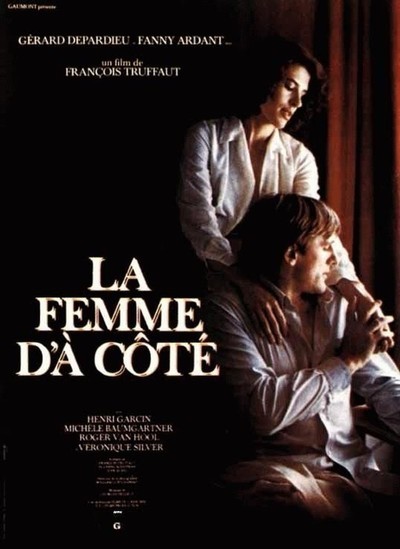