In Diao Yinan’s “The Wild Goose Lake,” a stylish neo-noir of saturated colors and meticulous visuals, every single shot seems to be composed and lit with obsessive attention to detail. Washed with a sparkling golden filter and unfolding under the pouring rain near a train station, the film’s very first scene claims this diligent aesthetic at once, with two strangers (one, wearing an eye-catching red sweater for extra oomph) engaging in a hushed, nervous, time-crunched exchange. And in case you need any more pointers than this secretive setting that we are in a noir: there will be a cigarette involved soon enough, one of the many signatures of the genre and still the most cinematically cool bad habit. Even in these initial moments, you will feel like pausing often to admire all the exacting on-screen qualities frame to frame: neon lights, reflections, ghostly negative space, smoke and even an undercurrent of eroticism. This desire to freeze the frame will be your constant throughout “The Wild Goose Lake,” with attributes that split the difference between a studious Gregory Crewdson photograph and a gaudy Nicolas Winding Refn movie.

Except, Yinan’s output makes Refn’s recent filmography seem vacant in comparison. That’s perhaps because Yinan is demonstrably driven by richer ideas about what fashions a noir, while Refn’s work can feel like an exercise in prettified, arousing excess. As he put on display with this 2014 feature “Black Coal, Thin Ice” (which won that year’s Berlinale), the Chinese filmmaker knows how to navigate the bleak struggles of China’s second tier cities with vivid realism; a proficiency he also employs for “The Wild Goose Lake.” Here, the themes seem a touch overpowered by the style and the parallel-running plots, zippy editing and all the flashbacks can also be tough to follow through. But the cumulative power of "The Wild Goose Lake" isn’t any less invigorating than that of his previous film.

Set in and around Wuhan, the story follows Hu Ge’s small-time gangster Zhou Zenong, gone into hiding in the town’s shadows after killing a cop by accident. Now the target of both police forces and for-hire mobsters with a handsome prize on his head, he meets with the alluringly mysterious Liu Aiai (Gwei Lun-mei), a compassionate, on-a-mission sex worker (or “bathing beauty” she is called, since her operation usually takes place in the water) at the aforesaid train station. But what is the mission exactly? It’s both a touch too convoluted and couldn’t be any simpler (like any film noir entry) and a series of flashbacks try to explain.

First, we find ourselves in the midst of a deliriously choreographed underground mobster meet-up from two days ago, where scores of motorcycle stealers get into a rough dispute (knives slash bodies, prosthetics legs fly, light bulbs get smashed and so on), an ordeal Zhou is a part of. There are attractive chase scenes during nighttime, rivaling gang members, splashes of color, lights, lights (and more lights) that decorate the canvas as we learn that Zhou has an ex-wife and she could use the money Zhou’s capturing is valued at. So Zhou embarks on his own complex scheme to collect the money with Liu’s help, only to find himself deeper in the bowels of a crime plot and this time, facing off against Liao Fan’s Captain Liu and his police squad looking to settle some petty scores.

As the plot progresses, who’s double-crossing whom becomes tougher to keep track of. But that’s part of the fun—even when “The Wild Goose Lake” knowingly complicates its thorny twists and turns, we go along with the ride, half dazed, half confused, not always sensing there is a destination, simply because the film’s operatic motions and psychedelic colors demand to be accompanied. So one moment, we find ourselves inside a cat-and-mouse chase sequence within the confines of a zoo (animal close-ups feel both surreal, painterly, and spine-tingling). And the next, we follow a group of dancers wearing light-soled sneakers dancing to Bonny M and crossing some train tracks like human fireflies. With “The Wild Goose Lake,” Yinan signals the makings of a major filmmaker. Perhaps the world he creates is a bit too scattered for its own good, but you will still want to melt inside its stunning, riotous glow. 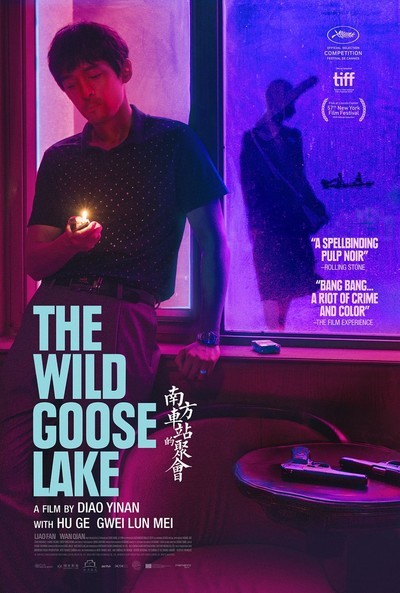