The Romanian spy thriller “The Whistlers” isn’t just a genre exercise, but it often feels like one. If you’re looking, you can see some of the ideas that writer/director Corneliu Porumboiu more clearly articulates in interviews about his movie, like how language is either corrupted or co-opted by its users, and how that concept grounds his double- and triple-crossing antihero protagonists’ use of El Silbo, a whistled language that’s native to La Gomera in the Canary Islands. In the movie’s press notes, Porumboiu (“12:08: East of Bucharest,” “The Treasure”) notes that “In a dark world where everything must be negotiated, genuine communication functions better through a secret language … ” That mentality lends some perspective to the convoluted actions of Cristi (Vlad Ivanov), a corrupt Romanian cop who is caught in the middle of an intricate plot involving drug money, a mattress factory, and local gangsters in La Gomera. But there’s not much to Porumboiu’s latest beyond a surplus of plot twists and double crosses.

That said: while “The Whistlers” doesn’t resonate beyond a few isolated moments, there are a couple of seductive dialogue exchanges and even one genuinely romantic moment. The movie’s busy plot is also entertaining, if only in the same way that really good Rube Goldberg machines are fun to look at. Just don’t expect to have many deep thoughts while various characters proposition and betray each other, all for the sake of setting up the next plot device, and the next, and the next.

Even Cristi is a walking plot device, since we never learn what motivates him beyond taking care of himself and maybe falling for Gilda (Catrinel Marlon), his femme-fatale contact in La Gomera. Cristi’s story is told through a series of hyper-compartmentalized narrative episodes, each of which begins with an intertitle that explains which supporting character is the focus of the next segment. There are flashbacks and flash-forwards, and lots of expository dialogue to keep viewers busy connecting the story’s dots, while Cristi pursues the drug money that Gilda and her former partner Zsolt (Sabin Tambrea), a mattress warehouse owner, have stashed away.

It’s usually unclear who Cristi’s really working for, since he’s often found out and forced into declaring fealty to competing interested parties, particularly Gilda; Paco (Agusti Villaronga), Zsolt’s aristocratic mob boss; and Magda (Rodica Lazar), Cristi’s chilly, Marlene Dietrich lookalike police chief. But “The Whistlers” is an old-school film noir with some modern style (mostly lighting, pacing, and plot) applied to charmingly outdated character types, so it’s not surprising that Cristi’s biggest priority is helping himself while he convinces everybody else that he’s on their teams, too. Cristi, as a character, is otherwise only distinguished by the existence of his mother, who infrequently appears for the sake of comic relief: she worries so much that, after she finds a big bag of money in her house, she immediately donates the loot to her local church. Romanians are funny like that, though rarely in a belly laugh sort of way.

The rest of “The Whistlers” is a clever enough genre movie puzzle whose sum total is never as rewarding as its best bits. Porumboiu’s fascination with language, as either an institutionalized or counter-cultural tool, is interesting, but also rarely so well-expressed that it’s more than attractive window dressing. And there's only traces of Porumboiu’s knack for dry, absurdist humor—see his excellent “12:08 East of Bucharest”—like when Cristi learns El Silbero, and he’s told that the key to making the right sounds is to crook your finger like a pistol, and put it in your mouth as if you are going to shoot your right ear off. “Remember: the tongue is under the finger,” he’s told. It’s a good line, but also too brittle to carry much weight. There’s also a noteworthy early scene where Cristi, after he first arrives in La Gomera, is driven through a long tunnel while Iggy Pop’s “The Passenger” plays. The song and the scene abruptly end after Pop sings “So let’s take a ride, and see what’s mine,” but before the song’s “la la la-la la la-la la” chorus kicks in. If you’ve seen these two scenes, you’ve already been to where “The Whistlers” is going.

Still, “The Whistlers” is compelling on a moment-to-moment basis, mostly because Porumboiu knows how to shoot his uniformly strong ensemble cast. He’s also pretty good at staging tense conversations, though they’re sometimes too choppy to be engrossing. If you like high-toned genre movies, “The Whistlers” might be for you. Everyone else would be better off watching or rewatching Porumboiu’s earlier movies, which are just as entertaining without being so narratively fussy. 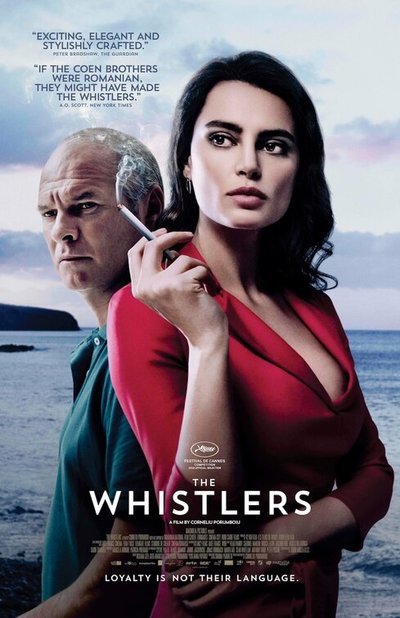