The Way He Looks

Only not. From its languid opening scene, in which teens Leo (Ghilherme Lobo) and Giovana (Tess Amorim) talk about how the summer’s about to end, and tentatively tease each other about experiencing their first kiss, the first feature written and directed by Daniel Ribeiro establishes a tone that tells the viewer this movie isn’t going to be about big things that happen in a kid’s life, but that it’s just going to be a movie about a kid’s life. We don’t even glom on to the fact that Leo is blind until the end of the scene, and Ribeiro’s sense of guileless not-quite-misdirection refuses to create the impression that a romance between Giovana and Leo would be a given under different circumstances.

The way circumstances become different is that Leo is teamed up on a class project with Gabriel, a handsome sighted peer who’s got a near-unquenchable curiosity about how Leo lives, to the extent that he becomes eager to learn Braille, and then quickly frustrated by its perceived complexity. Rather than frame the narrative as one of painful and/or liberating epiphanies, Ribeiro structures the movie as a relaxed line of grace notes, many of them charming (Gabriel teaching Leo dance steps to the songs of Belle and Sebastian, Leo asking his game, kindly father for tips in improving his face-shaving) and some painful (Leo’s emerging new self creates not entirely unpredictable troubles for him among bigoted classmates).

“The Way He Looks” is a modest and good-hearted film that leaves a clean impression: you’re glad to have spent time with the people in it, for sure. But if you’re someone whose own specific circumstances are substantively different from those of the characters, the sense of a pleasant visit is pretty much it. I can’t complain about that too much, and surely it’s a sign of social progress that a film has been made that’s both so kindly and so matter-of-fact, so unashamedly in tune to where its characters begin and where they’re likely to be going. 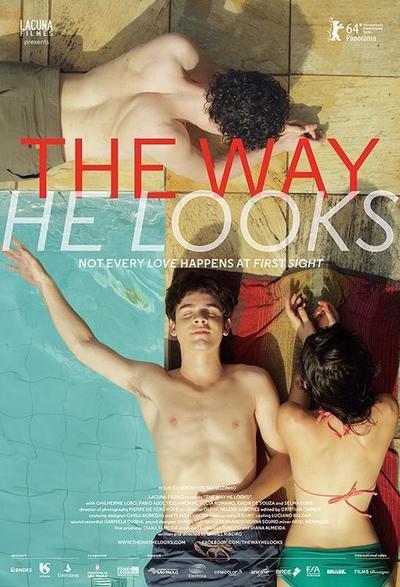