The terror of “The Wasteland” is awfully familiar, albeit in a surprising setting: it's a quarantine horror movie (made during the pandemic) that takes place in 19th century Spain, using a sparse cast of mostly three. A beast lurks in the darkness outside the isolated home of a father, mother, and their son Diego. They have escaped violence that tore their country apart, and live in fear of the human capacity to destroy. This proves to be an involving concept, but like many aspects of this film, it’s only captivating for so long. “The Wasteland” is able to suck you into its candle-lit world of discomfort, but it ends up being not as claustrophobic as it could be.

Diego is our eyes and ears, played with notable young actor energy and intensity by Asier Flores. He witnesses the idea of the beast manifest itself within his parents, and their two different approaches to this unknown. Salvador (Roberto Álamo), Diego's father of few words, wants him to learn to shoot a gun, and gifts him a monogramed rifle for his birthday. His mother Lucía (Inma Cuesta) appears less afraid, more in control, and wants to guide Diego through this unknown world with a gentler, less macho touch. Diego remains observant of it all, poking his head into the quiet spaces of his parents, trying to understand how they are holding it all together. All three performers give robust performances that demand a lot of reverence to the story’s self-seriousness; even when "The Wasteland" gets a little dry, there is still the respite of a full-bodied performance.

Diego can only go so far away from the house, and when he needs to use the outhouse at night, one of his parents must accompany him with a rifle at the ready. The open, quiet terrain around their home threatens them; ominous vistas add to the unease. Mystery has a great power here, and director David Casademunt creates a rich sense of atmosphere for this script he co-wrote with Martí Lucas and Fran Menchón. "The Wasteland" proves to be a handsome production with minimal elements, with cinematographer Isaac Vila painting their overall gray home with distinct brushes of candlelight and moonlight, using static wide shots to give us a full scope of their home. And for a long while, there's not even a sense of what the beast looks like—the story does not need it. The threat of it is enough, especially after an incident in which a bloodied man appears on a boat, leading to one of the film’s standout, gruesome make-up effects.

In later plot turns that don't earn our emotions, “The Wasteland” becomes a survival story in which paranoia itself is the beast that attacks his parents, making for a metaphor that flattens out while the film's slow burn grows tedious. There’s a line in which Diego learns that the beast feeds on someone’s vulnerability, and this lack of a subtlety early on is more a signpost about how the movie is going to hammer in its concept, using some blunt horror filmmaking, instead of enriching the metaphor.

Casademunt orchestrates a few modest horror set-pieces, usually with made-you-look editing or screaming string sections, but it all lacks a certain spark that could make it all resonate deeper, or later on, hurt even more. “The Wasteland” is the unique case of a horror movie with a more robust visual sense than a lot of its contemporaries, but that still doesn’t create a larger terror. It’s more the stuff of directors' reels, not nightmares. 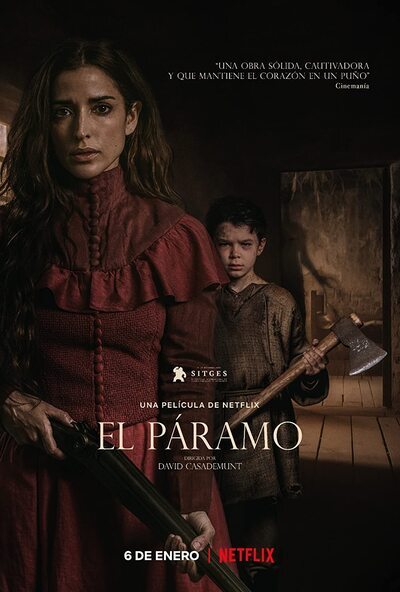