It's usually preferable to go into a new movie knowing as little as possible in order to better experience all that the filmmakers have in store. In the case of “The Unthinkable,” a low-budget Swedish import from a filmmaking collective known as Crazy Pictures, that is especially true. Hell, I would go so far as to say that just a glimpse of the poster alone would be enough to single-handedly skew expectations for most potential viewers. Of course, that makes things slightly tricky for anyone attempting to review it, as bringing up even the most seemingly benign elements could potentially reveal too much. Therefore, while I will keep things as vague as possible, I suggest that if you have any interest in seeing "The Unthinkable" at all that you put this review aside and save it until you have watched it for yourself.

The film begins in 2005 in a small Swedish town where the friendship between awkward teenager Alex (Christoffer Nordenrot) and neighbor girl Anna (Lisa Henni) seems on the brink of teetering into romance. Unfortunately, when his father Bjorn (Jesper Barkselius), a former soldier with a bad temper who sees conspiracy everywhere, blows up at Alex and his mom during an argument on Christmas, she takes off for good. To make matters worse, Anna is suddenly forced to move away with her mother, who has just gotten an important government job in another city. Heartbroken over the loss of Anna and seething with rage a Bjorn, Alex takes off in the middle of the night to Stockholm, where he grows up to become an accomplished musician but never contacts either his father or Anna.

When the story picks up about 12 years later, Stockholm has just been hit with a series of what appear to be terrorist attacks, one of which includes Alex’s mother among the victims. Alex heads back home for the funeral on Midsummer’s eve, not mentioning anything to his still-estranged father, who now works at the local power plant and is convinced that the recent attacks are something more than terrorist acts. While there, Alex is astonished to run into Anna, who has moved back there a while ago to be with her grandmother. Their reunion goes well enough and then ... well, the film shifts gears considerably at this point, as the violent attacks that have so far been kept in the background return with a vengeance in ways that I will leave for you to discover.

In most films within the disaster movie genre, the first hour or so is usually dedicated to introducing both the upcoming threat and the vast cast of characters that will be spending the rest of the time trying to stay out of harms way while making time to hash out their own issues amidst the chaos. What is odd about "The Unthinkable" is that during the long opening sequence involving the tumultuous 2005 flashback and Alex’s emotionally fraught return home, there's virtually nothing to indicate the kind of movie that it's going to become. This is not so much a problem for the unaware, but my guess is that those who go into it expecting scenes of mass destruction may find themselves getting very fidgety or even wondering if they wandered into the wrong theater by mistake.

Perhaps as a result of the film's low-budget nature (much of the budget was apparently raised via Kickstarter), “The Unthinkable” is more interested in the ways in which the characters react to the acts of carnage surrounding them than the carnage itself. In a number of ways, it reminded me a bit of “Miracle Mile,” Steve De Jarnatt’s spellbinding 1988 thriller in which a young man inadvertently intercepts a call claiming that nuclear missiles will be hitting L.A. in just over an hour and watches the city descend into increasing levels of chaos over a threat that might not even exist. Here, the threat is not quite as ambiguous but, like that film, it is more intrigued by how the characters behave rather than how they act in an action sense. This is not to say that the film skimps on the action in any way. There are a couple of moments—one involving a car crash on a bridge and the other involving a helicopter—that are genuinely astonishing, especially considering the project's inexpensive nature.

“The Unthinkable” is clearly always swinging for the fences and, not surprisingly, not all of those swings quite connect. The early scenes are a bit rough at times as they highlight two of the film’s most notable flaws. Instead of utilizing expensive CGI de-aging techniques to make Alex and Anna look younger in the flashback sequence, the filmmakers go the much cheaper route of plunking wildly unconvincing wigs on their heads, making them look like characters from an improv sketch rather than believable people. The other is the unavoidable fact that Alex, our ostensible hero, is not particularly sympathetic—he too often comes across like a self-absorbed jerk, and even when things are literally exploding around him, he still seems unable to think about anyone but himself. Granted, it takes a lot of nerve to put someone that off-putting at the center of the story but he may be too much for some viewers.

And yet, there's still a lot to like, or at least admire, about the film. It's impressively staged, especially considering the low budget, and contains a number of action beats that put their high-priced Hollywood competition to shame. I liked Barkseilus’ performance as Bjorn, a man living with any number of regrets who is horrified (and perhaps secretly pleased) that his often-dismissed warnings have somehow come true. And I liked the way that a development in the final third allows the proceedings to conclude on an unexpectedly lyrical note. Those looking for a typical disaster movie scenario that unfolds in the usual ways may find "The Unthinkable" to be a bit frustrating, but anyone who wants to see a movie willing to mess around with the usual genre tropes should find it an intriguing variation on a standard theme. 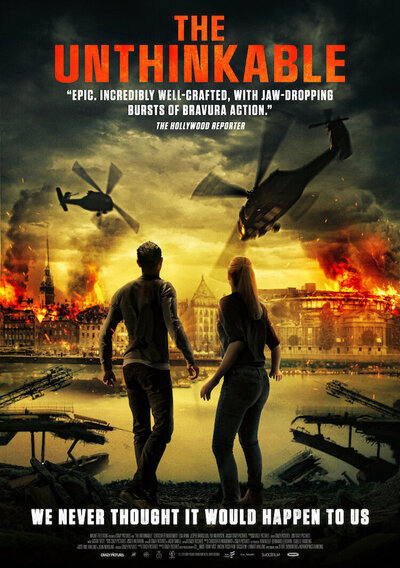