Disgraced journalist Gerry Fenn (Jeffrey Dean Morgan), investigating an incident of "cattle mutilation" in a small Massachusetts town, trips over another bigger story, when a deaf teenage girl sees the Virgin Mary in the trunk of the scariest-looking tree on the planet. Quivering with religious ecstasy, she performs a couple of miracle cures, and when word gets out—thanks to Fenn's stories—her small town turns into a modern-day Lourdes. But is the Virgin Mary who she says she is? Based on James Herbert's 1983 novel Shrine, "The Unholy" is fairly standard religious horror, just in time for Good Friday. It has some excellent jump-scares, but overall there's something rote about the execution, bits that feel sketched-in as opposed to filled out, and a surface-level interest in the main theme of Herbert's novel: what happens when the unholy masks itself as holy? The local priest says, "Wherever God goes, the unholy follows." You got that right. The devil doesn't strut into town cackling with evil glee. The devil is a smooth-talking charmer. "The Unholy" is not designed to be deep, but since glimmers of depth are present, the lack of follow-up makes this a disappointing watch.

Fenn is a mess. Ten years prior, while on staff at a mainstream newspaper, he fabricated a bunch of stories, was found out and banished to his now horrible life of having to travel long distances to interview some delusional farmer who doesn't recognize that it's a Metallica logo on his cow's rear-end. Fenn drinks a lot, has a grizzled cynical charm, and doesn't seem to be a candidate for being wowed by a teenage girl's freaky visions of a whispering glowing Virgin Mary, but he swallows it whole. Alice (Cricket Brown), the girl in question, is the niece of the local Catholic priest, Father Hagen (William Sadler). Alice has been Deaf since birth, but after her vision, she can hear and speak. It is a miracle. Soon after, crowds start gathering around the terrifying tree, coming to be healed by Alice. Alice and Fenn "develop a friendship" (this is one of the aspects of the film that's not really explored.) The media flocks to the town, but it is Fenn who gets the "exclusive" interview with Alice. This will be his ticket back to the Big Time, he can feel it.

Really? Maybe if he dug up the equivalent of the Pentagon Papers, or uncovered evidence of war crimes, or maybe if he tripped over a long-lost safe deposit box containing Adolf Hitler's teenage diary, maybe these things might warrant a re-entry into the big leagues. But interviewing some crackpot teenager healing people in a field in Massachusetts? I kept thinking: "He goes out of town for weeks, putting himself up at a motel, for an online mag only paying $150 a story. Even if the motel is cheap, the trip would cost way more than $150." Per diem for journalists doesn't really exist anymore like it used to, not to mention salaries, but still, it's a bit much, especially for a cattle mutilation story. Granted, "The Unholy" is not supposed to be a realistic portrayal of today's gig-economy for freelance journalists, but the fact that I was distracted by the la-la-land portrayal of journalism is indicative of the film's inability to hold my interest.

Cinematographer Craig Wrobleski pours on the moodiness, with off-center angles, a wintry palette, and  a conception of the town as a scary place, with scary-looking churches, scary-looking woods, scary-looking run-down buildings. The mood itself is frightening. Jeffrey Dean Morgan is always an interesting actor, and here he fills up what is a pretty underwritten role with shades of disappointment and awareness of his many failings. But even he can't single-handedly create a friendship with Alice through one conversation about music. There's supposed to be a big emotional pay-off with this friendship. The payoff doesn't come.

When "The Lady" (as Alice calls the Virgin Mary) starts going after doubters, haters, and skeptics, Alice says, sounding like a tyrant: "Doubt weakens faith. Doubt leads to damnation." Her uncle calls in the church big-wigs, a bishop (Cary Elwes, with appropriate Boston accent) and a hot scruffy Monsignor (Diogo Morgado) to investigate the miracles Alice performs. Meanwhile, her fame grows. She goes "viral." You might even call her an "influencer." There are a couple of shots of girls across the land watching YouTube videos of Alice performing miracles, and these girls are weeping, feeling "seen." If Alice can do it, I can. Alice didn't "fit in" either, and now she's a saint! There's hope for me too! This is the most intriguing aspect of "The Unholy," almost bordering on satire. We see it all the time, "influencers" hocking curated "lifestyles" to the masses, who swallow it whole and then act betrayed when it's discovered the Emperor has no clothes. People are put up on pedestals for a brief shining moment before disillusion comes and the mob arrives, wielding pitchforks for the same person who was idolized the day before.

"The Unholy" misses a lot of opportunities to build out not just this idea, but all of them. 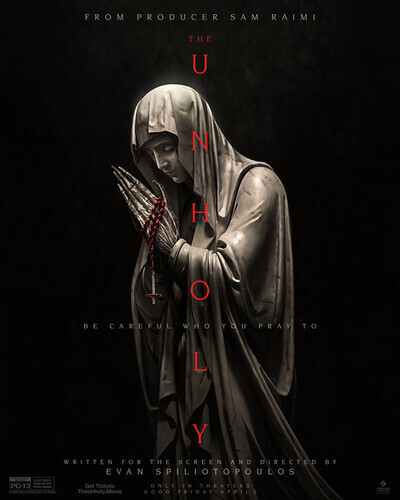 Rated PG-13 for violent content, terror and some strong language.

Writer (based on the book Shrine by)