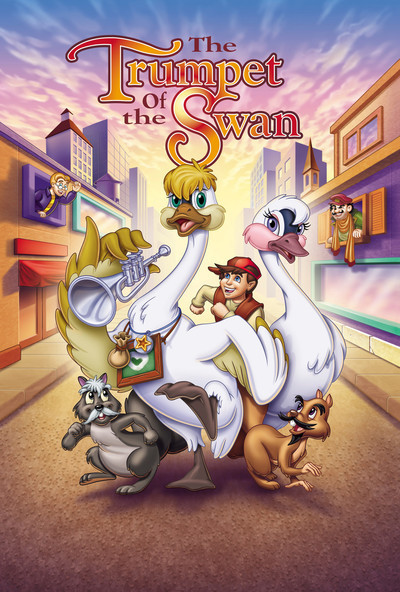 "The Trumpet of the Swan" is an innocuous family feature that's too little/too late in the fast-moving world of feature animation. I would have found it slow-going anyway, but seeing it not long after the triumph of "Shrek" made it seem even tamer and more flat. Maybe younger children will enjoy it at home on video, but older family members will find it thin.

The story is adapted from a 1970 E. B. White fable about a swan named Louie who is born without a voice. While his sisters Ella and Billie are trumpeter swans with magnificent calls, Louie paddles around in disconsolate silence. His father, desperate, raids a music store in Billings, Mont., and steals a trumpet, which Louie learns to play.

The young cygnet is a quick study. Encouraged by a local boy named Sam (voice by Sam Gifaldi), Louie enrolls in the local (human) school, and learns to communicate by using a blackboard he straps around his neck. But his father's theft of the trumpet weighs upon him, and eventually he flies to Boston and appears in jazz clubs to raise cash to pay for the instrument.

There's more, involving his romance with the feathery Serena (voice by Reese Witherspoon), who in despair over Louie's absence waddles to the altar with the dastardly Boyd (voice by Seth Green). Much is made of the build-up to the Serena-Boyd vows, but once they are interrupted by Louie's last-minute arrival, there are no further wedding scenes, leading thoughtful viewers to wonder whether Serena's nest-full of eggs represents a little premarital feather-dusting. It wouldn't be the first time a bird fell for a trumpet player.