The Trip To Bountiful

The thing that saves this movie from sentimentality is that the heroine is a little ornery. She's not just a sweet and gentle little old lady. She's a big old lady, with a streak of stubbornness. And just because she's right doesn't mean she's always all that nice. When "The Trip to Bountiful" tells us that she wants to leave her miserable life in the city and pay one last visit to her childhood country home, somehow we know that the movie won't be over when she hears the birds singing in the trees.

The movie stars the redoubtable Geraldine Page as Mrs. Watts, a country woman who has come to live in a cramped city apartment with her son and daughter-in-law. The apartment isn't big enough for two women.

They're always on each other's nerves.

The wife, Jessie Mae (Carlin Glynn), doesn't like Mrs. Watts singing her hymns around the house. Mrs. Watts' strategy is more subtle: She tries to appear long-suffering, a martyr, and she is much given to throwing herself on the couch and pulling a comforter over her head to muffle her sobs.

Both these women have a pretty good case against each other, but it's Mrs. Watts we sympathize with. She hates life in the city, she knows it's choking her to death, and she wants to pay one final visit to Bountiful, the little town where she was born. So she goes to the train station, but the milk train doesn't stop in Bountiful anymore. So she goes to the bus station and buys a ticket to the nearest large town. This is in Texas in 1947. Because her son and daughter-in-law have gone to the train station to head her off (she has tried to escape before), she makes her getaway.

The whole middle section of the movie is the best, as she meets another traveler on the bus, a young woman named Thelma (Rebecca De Mornay). They sit next to each other during the long, drowsy trip, and they exchange memories and confidences. Thelma is, in a way, only an excuse to give Mrs. Watts someone to talk to, so that we can eavesdrop. Yet De Mornay makes the character so interesting, so young and open-faced, that the relationship between these two women becomes the heart of the movie.

Even the ending itself doesn't quite live up to it.

"The Trip to Bountiful" has a quiet, understated feel for the small towns of its time. The little rural bus station, with its clerk drowsing under a lonely lamp bulb, looks just right, and so do the midnight streets outside. And when the sheriff arrives, alerted to look for a runaway old lady, it's perfect the way he and the ticket agent size up the situation and let Mrs. Watts have her last look at her childhood home.

Then her family arrives: her son Ludie (John Heard) and his wife Jessie Mae. Ludie really has his work cut out with these two women.

Both of them live at a time when many women lived their lives through their men, and there is not enough room inside Ludie's simple, desperate soul for both of them. Yet there is a moment of poetry as Mrs. Watts sits on the porch of the old farmhouse and talks about how she almost expected to see her own parents come walking through the door, just as if all those years had never passed, just as if her own lifetime was a dream, and she was a young girl again.

"The Trip to Bountiful" was written by Horton Foote, who based it on his own stage play. This is Foote's second recent slice of life from Texas; "Tender Mercies," the wonderful movie starring Robert Duvall as an alcoholic country singer, also was written by him. You can see that "Bountiful" was based on a play - it falls fairly obviously into three acts - but the rhythms and dialogue come out of unstudied real life.

And Geraldine Page inhabits the central role with authority and vinegar. The movie surprises us: It's not really about conflict between the generations, but about the impossibility of really understanding that you are even a member of an older generation, that decades have gone by.

Geraldine Page, who somehow always manages to have a hint of girlishness in all of her performances, who always seems to be up to something roguish and not ever quite ready to cave in to age, finds just the right notes in the final scenes to tell her son something he might never be able to understand: Someday he will be old, too, and he won't be able to believe it, either. 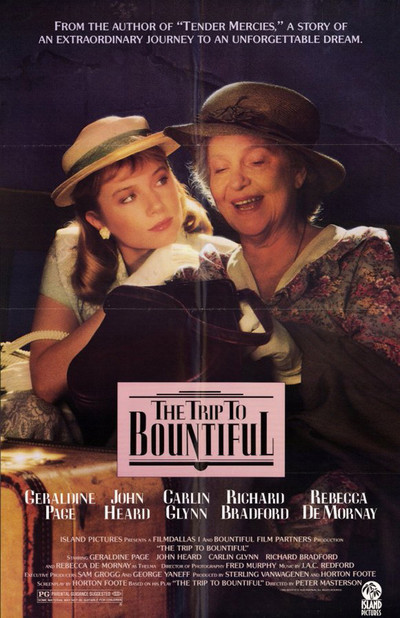