One can't help but wonder just how much of the charm of the Korean con man thriller "The Swindlers" wore off in translation. I readily admit that, as someone unfamiliar with the Korean language (beyond a couple of key phrases), the appeal of the film's more dialogue-intensive scenes were probably lost on me thanks to English subtitles that were often distractingly blocky.

Then again, much of this thriller's unbelievably formulaic plot—a group of con men go on a quest to hustle a Bernie Madoff-style scam artist—is already flat-footed. Sure, overly literal translations of colloquialisms, like "swindlers," are one thing. But there are also, generally speaking, too many scenes that are so contrived that I sometimes wondered if a living script template for an "Ocean's Eleven"-style heist movie had come to life, and left no cliche behind in its hapless quest to deliver superficially topical thrills. There's a small chance that the subtitles of this film simply aren't apparent because of an insurmountable cultural barrier. But it's more likely that "The Swindlers" was always DOA.

Take for example the laborious half-hour set-up that quickly, and unconvincingly establishes big fish antagonist Joo-chil Jang (Sung-tae Heo) as a heartless criminal who, according to a news reporter, is responsible for "the biggest Ponzi scheme in history," and the suicides of several financially destitute victims. Everybody wants a piece of Jang, including square-jawed lawyer Heeo-soo Park (Ji-tae Yoo), sexy lady pickpocket Choon-ja (Nana), and cocky young con man Ji-sung Hwang (Bin Hyun). So, a super-coalition of pretty-looking thieves, almost all played by popular Korean actors, forms with the express purpose of taking down Jang.

Unfortunately, there's not much to Hwang's maverick leadership skills, nor his colleagues pseudo-twisty attempts at disarming Jang's many go-betweens, and colleagues. Every major story, and stylistic beat in "The Swindlers" was borrowed from better films, especially Steven Soderbergh's "Ocean's Eleven" trilogy. Well-dressed characters watch gigantic TVs, and monitor each other's progress through seemingly omnipresent closed-security televisions. They record phone calls and in-office negotiations, hoping to stumble upon incriminating evidence they can use for the next part of their elaborate confidence tricks.

They also frequently exclaim key plot points as if they were characters in a really bad "Dick Tracy" cartoon, like when multiple protagonists address Hwang's father Yoo-suk (Jin-young Jung) by his con-man nick-name of "London Fog." Lines like "Good old London Fog," and "What are you thinking, London Fog" isn't just tin-eared: it's embarrassingly corny. Then again, the real nadir of this method of intelligence-degrading expository dialogue comes during Hwang's first scene, when one of Park's men identifies Hwang by exclaiming "That's the guy who only cons the swindlers!" I'm sure this line sounds relatively better in the original Korean. But this already tacky line is especially abysmal when nothing else in "The Swindlers" seems to come together.

Then again, lame dialogue would be bearable if the film's cast were more than just generally adequate. Sadly, these actors frequently over-play their characters' hands so that we always know when Park's crew are performing. They also usually lack chemistry, which sinks any scene where Nana has to seduce already wary subjects. Nana plays a naive babe in the woods well enough, but her mannerisms are expressed mostly through tics, like pouting, eyelash-batting, and crying. There's never a moment where you can see in her what her interchangeable targets should be drooling over. It's bad enough that Nana is stuck with pseudo-flirty baby talk like "Don't I look like a girl to you?" What's worse is that Nana doesn't even nail a physical-comedy-centric scene like the one where she plays drunk, and tries to convince one of Jang's intermediaries to lower his guard. If I were in this guy's position, I would sprint away as fast as I could.

It's especially unfortunate that "The Swindlers" is exclusively populated by characters and performers who appear to always be acting since the movie's central theme is, as (sigh) Night Fog explains the notion that "doubts" are all a good con artist needs to persuade a mark since "Doubts become assurances once they're dispelled." Again, a klutzy line of dialogue, but one that could have revealed something about the psychology of scammers, and their victims. No such insight can be found here though since every potential source for good popcorn entertainment is thrice warmed-over, and poorly executed. You may think that you, the viewer, have it bad by the sixty minute mark, at which point you probably won't care who is inevitably going to backstab who. But just think of the poor subtitle translator who had to agonize over dialogue so leaden that it took the joy out of a word that's as joyfully outdated as "swindler." To that unsung translator: you deserve a substantial raise, a major award, and a stiff drink. 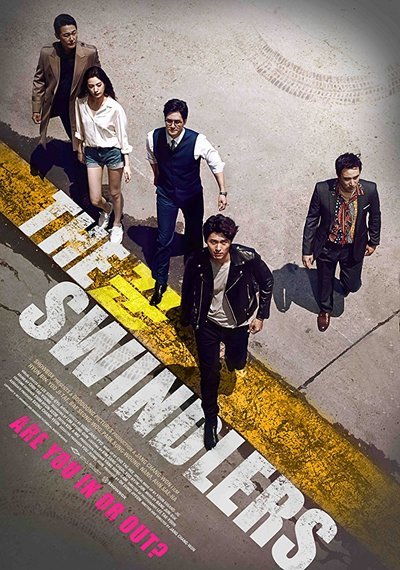