The Strangers: Prey at Night

Ten years is a long gap between a movie and its sequel, especially for a horror movie. That gap, though, seems as if it was enough time for the filmmakers of "The Strangers: Prey at Night" to get it right.

The 2008 original, written and directed by Bryan Bertino, never quite had the courage of its convictions until its bleak-beyond-bleak ending. The problem, though, was that the ending came out of nowhere. Here was another home-invasion movie, in which it seemed as if the villains were simply pranking a couple for an extended period of time (one of the victims of the invasion was the only one to kill anyone until the climax). When the masked antagonists revealed their true natures in the final minutes, it came across as a shock in the worst possible way.

In theory, the ending was chilling—the idea that this trio of people didn't have any rational motive, any supernatural characteristics, or, when the time came, any scruples in killing their victims. In practice, it felt cheap—tacking on a hopeless ending just to make us feel bad.

Bertino returns, as a co-screenwriter this time, leaving the directorial work to Johannes Roberts, who brings a far surer hand and a more striking visual aesthetic to the sequel. So much of the success of any given horror film relies on a few aesthetic elements: its atmosphere, its ability to play with light and the shadow, and, of course, location (...location, location—as real estate folks would add for effect). From the start, a prologue that breaks its predecessor's strange sense that the killers might just be toying with their victims, this is a visually oppressive exercise in terror. Save for a few scenes in a brightly sunlit suburb, the film remains that way for the extent of its running time.

Thanks to the original, we know by now that the three strangers (played by Damian Maffei, Emma Bellomy, and Lea Enslin), who wear ironic masks or a hood with painted smiles, mean business. The neat thing about this sequel is that it stands on its own. We don't need to know from the ending of the original movie that these people are heartless, cold-blooded killers. They get to work almost immediately in this outing, pulling up to an occupied trailer home in an otherwise empty trailer park in their beat-up pickup truck—a peppy pop tune blaring on the radio (Roberts has that song play over the production logos and a black screen, but as soon as the film proper starts, it cuts out with a jolt, as we take in the dim, streetlight-lit scene). As with the original, a few knocks on a door at an ungodly hour of the night starts off a brief, if genuinely creepy, opening.

The rest of the story follows a likable family of four: father Mike (Martin Henderson), mother Cindy (Christina Hendricks), daughter Kinsey (Bailee Madison), and son Luke (Lewis Pullman). They're on their way to that trailer park for a weekend trip, before taking Kinsey to a boarding school. There's tension between the family members, naturally. The parents are worried about their daughter in slightly different ways: Mike is a bit out of the loop but knows something is amiss, and Cindy was in a similar place during her own teenage years. Kinsey resents her parents' decision, as well as her brother's standing as the "perfect" child. Luke clearly thinks his younger sister is a nuisance, but he wishes for a return to the days when Kinsey was his little sister.

It's a little surprising how well Bertino and fellow screenwriter Ben Ketai fit in scenes to help flesh out these relationships before the terror truly begins, and, even more surprisingly, during the height of it. (The height of the terror, by the way, is a near constant once it starts). The film doesn't stop for these moments. They're built into the rising tension, as the family separates and slowly comes to realize that they aren't alone in the park, and they raise the impact of what could have been straightforward sequences of the killers hunting down the assorted family members, trapping them in enclosed spaces, and getting to their bloody work. Two stand out: an intense scene of last-second escape in a cramped bathroom and a parent offering a child what might be some final words. Even more vital to the film as a thriller, we have a sense that, unlike the protagonists in the original, these characters have an actual chance against the killers.

All of this heightens the uneasiness, because we like these characters enough in their own, unique ways. They're good enough that we haven't even arrived at Roberts' technique yet. It's impressive on a technical level, with the director and cinematographer Ryan Samul utilizing some lengthy, preternaturally precise zooms (a shot that starts dozens of feet away gets into almost-close-up while still keeping an actor in frame).

It's even more effective in how well Roberts incorporates the seemingly vast expanse of this location for a series of genuinely scary sequences. The trailers are tight spaces, where any of the killers could be hiding in the shadows or beneath some kind of cover. One will instantly notice the absence of the usual build-up and sting cues on the soundtrack, meaning that we're never quite certain when the scare will arrive. The fields of the park provide enough sporadic light and distance that we can barely spot a figure or the headlights of that damned truck standing—and then approaching—from afar. There's a virtuoso sequence at a pool that opens with a subversion of Roberts and Samul's usually slow zooms. The sequence just keeps going from there, as one of the characters engages in a life-or-death fight with an ax-wielding maniac on the edge of and in the water.

"The Strangers: Prey at Night" is an unexpected anomaly—a sequel that both is better than and fixes the problems of its predecessor. It's a chilling and genuinely frightening horror film, driven by some solid performances and Roberts' command of atmosphere, location, and relentless pacing. 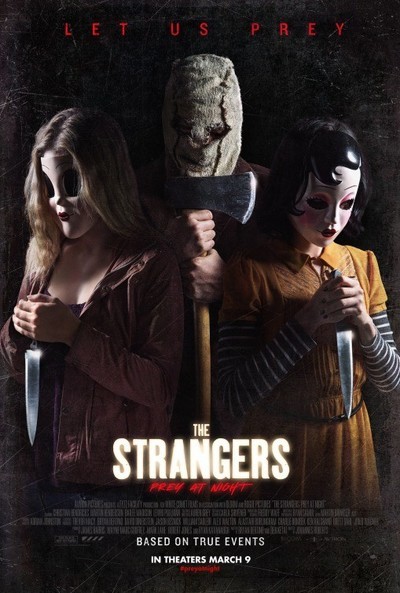 Rated R for horror violence and terror throughout, and for language.

Damian Maffei as Man in the Mask