If you're watching "The Stranger," a gruesome and perilously underlit (ie: mysterious) indie horror film, you're probably watching it because the film's full title is "Eli Roth Presents The Stranger." This is especially ironic since "The Green Inferno," Roth's appropriately icky homage to Italian cannibal chillers like "Cannibal Holocaust," has had trouble finding an audience beyond film festivals (it's currently scheduled for a September 5th theatrical release and is worth seeking out). Still, "The Stranger" is not really like Roth's films since that implies it has a sense of humor, and is effectively unnerving. Instead, "The Stranger" is a one-trick film with strained self-seriousness that rests squarely on the shoulders of a plot twist. It's a lousy little film that is so dark and joyless that it leaves you feeling like you wasted your time watching it. But while "The Stranger" is bad, the fact that it makes you wait and wait for its excessively dismal perspective to be justified by a measly little twist is even worse.

How to describe "The Stranger" without giving its only novelty? Here's a film that struggles to impress viewers with its humanity by immediately impressing us with sadistic violence. An aura of un-pleasantness surrounds drifter Martin (Cristobal Tapia Montt), a man with a past who returns to his old Anytown USA home, and discovers that his wife Ana (Lorenza Izzo) is long dead. Martin consequently tries to kill himself by having local thug Caleb (Ariel Levy) slay him in a fit of pique. But, as we soon find out through a series of flashbacks, Martin was suicidal well before he learned of Ana's demise. And Martin doesn't die easily.

Because Martin's problems are the main source of conflict in "The Stranger," the film's pitilessly grim drama serves to confirm its main character's myopically cynical perspective. And then we get an unearned happy ending! The disconnect between the ugly world that viewers inhabit for the majority of "The Stranger" and the unconvincing glimmer of hope that the film concludes with is vast and contains a multitude of macho posturing. Writer/director Guillermo Amoedo (co-writer of Roth-helmed "The Green Inferno" and "Knock Knock") fixates on violence like it were a meaningful fact of life. We see Caleb, a pasty-white punk who looks like he's auditioning for the role of "Heavy #2" in a "Death Wish" reboot, slowly sink a switch-blade into Peter's gut without Martin doing anything to stop him. This is after Caleb threatens Martin, and Martin does nothing but glower impassively. Martin wants to be hurt, so viewers feel Martin's pain throughout "The Stranger."

In another key scene, we experience an assault from the point-of-view of Peter (Nicolas Duran), a sullen teenage graffiti artist who confirms Martin's moribund perspective by tagging walls with trite doom-sayings like "The end is near." Since Peter predictably befriends Martin despite Martin's epithet-heavy protests, he inevitably attracts Caleb's attention. And when Caleb tries to dispatch Peter by kicking him a lot, and then lighting him on fire, we experience Peter's assault from Peter's point-of-view. We see flashes of Caleb's feet and legs flash before the camera's surrogate eye. And we hear muffled blows landing. Then there's a burst of flame, and we know that someone has caught fire. That conflagration isn't supposed to be sensational though, just ugly, brutal, and hyper-real.

Martin's dire worldview isn't repugnant just because it's monotonous, and unproductively vicious. Amoedo also validates Martin's outlook by revealing early on that corrupt local police lieutenant De Luca (Luis Gnecco) is Caleb's dad. So nobody has a chance in this film because even the cops are crooked. Peter's desperate single mom Monica (Alessandra Guerzoni) is equally impotent, as is De Luca's partner Officer Harris (Aaron Burns). Harris's presence is especially frustrating though since he seems to live to serve as De Luca's punching bag. Harris cringes, does his job by the book, and generally tries to do good. So naturally he's repeatedly punished for his diligence.

What value then does the major twist at the heart of "The Stranger" have? Not much, unless you crave further validation of Martin's nihilistic philosophy. There are moments throughout the film that suggest that Martin is wrong, and that people are better than he gives them credit for. But many of these scenes feel tacked-on when they should be the entire point of "The Stranger." The film's relentless drab-ness (seriously, could they not afford better lighting rigs?) is suffocating, but what really rankles is Amoedo's half-hearted attempt at waving away his film's abundant nastiness by half-heartedly suggesting that even long-suffering masochists can do good too. If the world outside your door ever looks as bleak as it does in "The Stranger," don't find religion: seek out a good therapist. 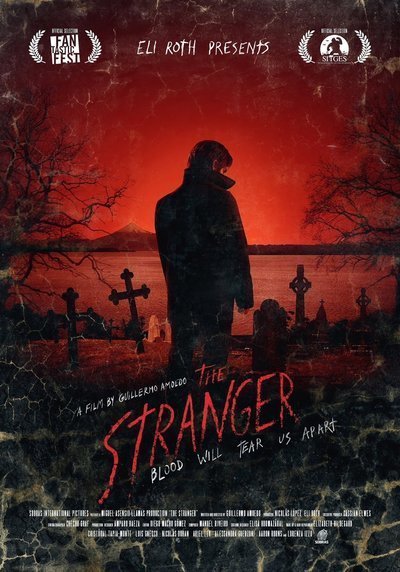