There’s something eerie, and sometimes even dreadful at the heart of “The Soul Collector,” a new South African horror movie about the damage done by hungry ghosts and their ignorant descendants. Mostly because “The Soul Collector” often suggests more than its streamlined plot and mythology can express.

Neophyte writer/director Harold Holscher treads carefully enough as he outlines his sometimes old-fashioned, sometimes retrograde fairy tale about Mary (Keita Luna), a young white girl who befriends Lazarus (Tshamano Sebe), a black “sangoma” witch doctor, after she moves into a deserted plantation with her adopted parents. But Mary and Lazarus’ bond is symbolically freighted with more history than their story can bear since “The Soul Collector” is set “Somewhere in South Africa” in 1977, as we’re told in an early scene. So while Holscher is both clever and/or sensitive enough to provide more questions than answers, this film often seems like a rough draft for a more disturbing ghost story.

“The Soul Collector” begins with a typically vague warning to the curious: Lazarus identifies himself as “the Wanderer,” so “you are in me, and I am in you. And we will meet again.” He concludes by repeating that, “I am The Wanderer. And you are mine, forever.” Lazarus’s threat is more evocative than most of the movie’s scare scenes, which often feel tacked on.

More often than not, Lazarus’ identity, as well as his plans for Mary, are ominous enough to make “The Soul Collector” worth watching. In scenes that bring to mind “Curse of the Cat People,” Lazarus consoles and advises Mary. He rhapsodizes about her pet silkworms, since they give him an opportunity to deliver folksy observations about maggots and spiritual transformation after Mary stumbles upon a dead monkey (fair warning: the monkey’s corpse looks real enough). “These maggots that you see here, they need a body to stay alive,” says Lazarus. “They're not different from your worms: they eat from something, and then they turn into something.” Sounds important enough, but what does that actually mean? Lazarus, as a character and a symbol of grief, remains mostly undefined throughout “The Soul Collector” since both his and Mary’s familial past are deliberately shrouded in mystery.

Holscher often keeps viewers at arm’s length, seemingly to add totemic significance to already surreal images: a talking corpse; a burning building; and a star-lit, and very pink limbo-like afterlife. So it’s hard to know why Mary keeps her worms in a music box that plays music from “Swan Lake” (specifically: “The Swan’s Theme”), or why Lazarus makes a pact with an unidentified god to feed his hungry, undead daughter. There are some obvious answers—because she’s darker than she looks, and he’s lighter than he seems?—but they aren’t very satisfying given how thinly sketched-out the rest of the movie’s busy plot is. Because whenever the movie’s not about Lazarus and Mary, it’s about: William (Garth Breytenbach), Mary’s stubborn adopted father; his wife Sarah (Inge Beckmann), who is a bit of a nag; and oh yeah, a neighboring group of black South Africans, led by Obara (Chris April), a sympathetic elder who lost one of his eyes to Lazarus. Ok, but who are these people, and why does it matter?

Watching “The Soul Collector,” I sometimes wondered if the movie would be better or worse if Holscher took more time to explain what I was looking at. At the moment, he’s not very good at spelling things out, like when Sarah describes herself to William as “a dead tree without any purpose.” Holscher also uses Lazarus and Mary to indulge in some well-intended, but dramatically inert, and symbolically soggy preaching about what we lose when we prioritize the dead over the living.

Then again, “The Soul Collector” works as well as it does because of the impenetrable nature of Mary and Lazarus’s relationship: he’s obviously out to hurt her, but she’s often undisturbed by his threatening presence. Which is kind of amazing given that Sebe, as charming as he may be, radiates a grasping, exaggerated sort of sincerity whenever he treats throw-away lines like “I didn't mean to cause you any alarm” as if they were four-course meals. Lazarus is obviously a threat to Mary’s safety, but what difference does our knowing that make given all the movie’s other incomplete or unanswered questions?

The ties that bind Lazarus with Mary are ultimately not strong enough. Holscher’s story promises a lot, sometimes using simple practical in-camera special effects, but usually with frustrating dialogue. Holscher’s also a talented filmmaker, and the best parts of “The Soul Collector” made me eager to see what he does next. I just wish that there was more to latch onto here, a calling card movie that’s rarely as substantial as it is promising. 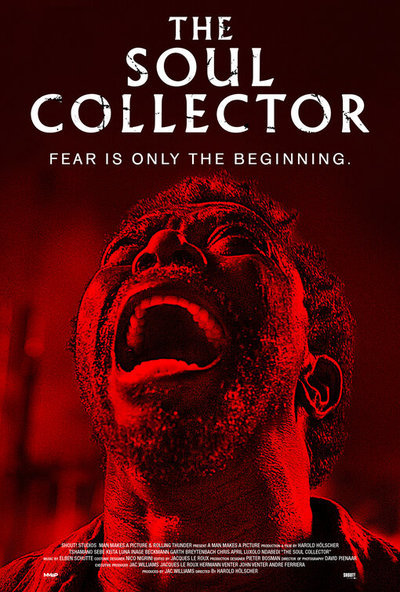