The Shrink Next Door

“The Shrink Next Door” is a nightmare of terrible boundaries, of toxic advice, of a true friendship that lasted more than 25 years. And it happened, albeit to a poor schmuck who got taken for a ride by his shrink, who is presented as blissfully unaware of how unethical it is to be friends with your therapist, or to make them a business partner, or to later let them remodel your property. This Apple TV+ series developed by Georgia Pritchett and directed by Michael Showalter and Jesse Peretz, mines this connection for a drawn-out true-cringe story, as enacted by two bastions of modern on-screen bromance, Will Ferrell and Paul Rudd.

How did it happen? Will Ferrell’s Marty Markowitz, as delicate a man-child as any he’s played before, consults with his slick, charismatic therapist Dr. Isaac Herschkopf (Paul Rudd). The conversation initially sounds like Dr. Ike is helping Marty, only then for Dr. Ike to suggest something that is actually letting Dr. Ike take over Marty’s life piece by piece, check by check. These displays of manipulation and gaslighting unfold like the lightest burn from a psychological thriller, while struggling to shake the air of an “SNL” skit as they both use bottom-jaw-heavy New Yawk accents. And they’re intriguing because they’re so brutal, at least the first few times, before they become redundant, before they prove to be almost all that this weirdly plain saga can offer.

What’s most maddening about this character study, however, is the packaging. It’s told over eight 40-minute episodes, when it only has just enough story and ideas for a Sundance-anointed, 100-minute dramedy. The interest of the story gets stretched out, and it becomes so repetitive, while the punchiness of any shoehorned humor is lost in the process (Ferrell sings later on as if a last-minute bid to save advertising). It’s unfathomable, really, that this is something people will tune into each week, as they won’t get a great deal of progression but the same spectacle. It’s an easy binge at the very least, also because its story only slightly focuses on other lives affected by Dr. Ike.

The opening moments of “The Shrink Next Door” begin in the 2010s, with Marty committing an act of backyard sabotage after a lavish party that Rudd’s character has hosted, in a home that we learn does not belong to him. It goes back to 1981, to the beginning days of their relationship with the first red flag, in which Marty finds a new friend with his therapist, Dr. Ike. Marty initially was sent by his sister Phyllis (Kathryn Hahn, who is fiery and heartfelt here, but don’t get too attached) to face anxiety, along with his own problems related to his father's passing and gift of the family curtain business, and a disastrous romantic relationship that shows conflict-averse Marty acting as a total pushover. Dr. Ike doesn’t suggest so much as tell him what to do, and it empowers Marty as much it doesn’t make him autonomous, just ever faithful to his new friend. Again, who is his therapist.

Without an obvious eureka moment, Dr. Ike realizes how much he can use Marty and his money. In the first few episodes of the miniseries (the first three premiere on November 12), Dr. Ike expands his control, and gets between his relationships with Marty’s sister and his employees, including getting a job as a consultant at the curtain business. It allows for more opportunities to drain money from Marty, although Marty tells himself that this is normal, an act of kindness and empowerment from his new best friend. The dynamic makes the same point over and over, and the narrow plotting doesn’t allow too much room for how Dr. Ike’s wife Bonnie (Casey Wilson) feels about these pseudo-cons, or what other patients experience (Sarayu Blue appears later on for a few scenes as another patient, but her scenes, sweet as they are with Marty, feel shoehorned).

Ike is a therapist with many of his own problems, including undiagnosed narcissism. But even a friendship like this is a two-way street. My above usage of the descriptive term “schmuck” for Marty might sound harsh, kicking him while he’s down, especially for how long it went on, but it’s honest—this is the tragedy of being a schmuck, of trusting too much, of being minimized when you think you should be accommodating. But you can be empathetic to a schmuck, and Ferrell’s tender performance here shows that, making sense of Marty by presenting him as a confused boy, especially when he’s older and has stomach problems. Confusion is a more intricate feeling than simply being sad, and Ferrell plays it very well in beats that have Marty seeing the lavish life Dr. Ike is making him cater, while still not getting it. Marty's overdue journey of real autonomy then comes to heartbreaking detail, and it pays off when the series returns to those opening scenes. The material is nuanced, but only in that the best parts of Ferrell’s work here provide some idea as to how someone would go along with this for more than two decades.

Ike is more of a mystery, and Rudd’s performance itself becomes a type of half-baked concept. There are kooky things about him, like his love of taking pictures with celebrities, or his continual desire to host parties, but the series struggles to make these eccentric traits funny, or to get really under them. Rather, the show relies forcefully on Rudd’s likability—to quote a Bud Light commercial, “Everybody loves Paul Rudd"—and Rudd has initial promise as a con-man with gleam in his eye, a smooth way to turn one requested favor into another sacrifice from Marty. Like an actor, Dr. Ike can enter a scenario with a clear goal of what emotional arc he wants by the end, and how he can bend or counter what’s being said to come off as helping. But the show doesn’t give enough sense of how one gets from Ike’s personal issues to becoming a wildly unethical therapist, even with stolen moments that hint at his issues with his deceased brother and father. Rudd doesn’t create a great deal of nuance for such a complicated character, and the show is bizarrely incurious about him, leaving certain moments to play with the same spectacle of smooth manipulation; the show trains you to watch Rudd’s performance and the grift, but it doesn’t become interesting, so much as a missed opportunity for Rudd, and for us.

Chances are that we all have an Ike in our life, past, present, or coming around the bend (you also might be someone’s Dr. Ike, too). But while there’s usually a breakthrough at some point about this friend treatment—especially from a vigilant third party—Marty doesn’t realize this for more than two decades. It’s an absurd, tragic scenario, but it happens; some people actually do die from pianos falling on their heads. Marty’s story is a pitch-black story of not knowing what boundaries are, but the series doesn’t play up the absurdity enough, too self-amused that it got the packaged charisma of two stars to depict it. And it's just barely funny, even as a story of bromantic sadism that’s designed to be shocking with how ridiculous things get, and how sad it is that throughout their time together, they both got what they wanted.

The first three episodes of "The Shrink Next Door" premiere on AppleTV+ on Friday, November 12th, with a new episode each week. 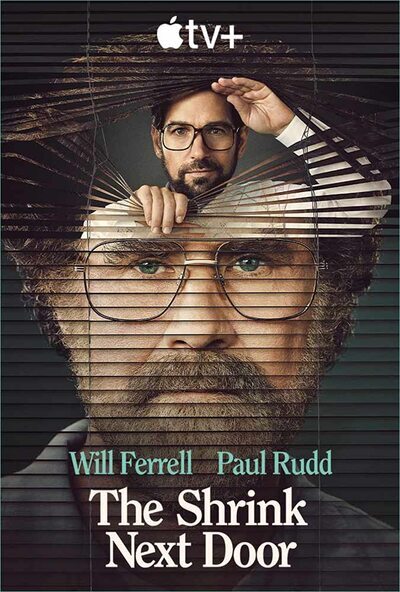 Will Ferrell as Marty