The Short History of the Long Road

Ani Simon-Kennedy’s bittersweet road trip drama “The Short History of the Long Road” is a journey without a destination. Where you think it’s headed, it’s not. What you think will happen to its lead character Nola (Sabrina Carpenter), doesn’t. There are gentle surprises in the trip’s unexpected turns and setbacks, and thankfully, Simon-Kennedy knows where she’s going.

Teenaged Nola and her dad Clint (Steven Ogg) share a rambling existence roaming the American Southwest in an old van, helping themselves to the occasional dip in a pool that isn’t theirs, singing along to early '60s pop songs and working odd repair gigs to make ends meet. Clint wants his daughter to learn how to live an independent life with nothing to tie her down or hold her back, but it’s a lonely life with its own set of problems. When Clint suddenly dies, the movie leaves behind the cute father-daughter story and shifts gears towards a painful coming-of-age tale. Nola will have to make sense of the loss on her own and figure how she, still only a minor, will survive on her dad’s life lessons.

Simon-Kennedy, who wrote and directed “The Short History of the Long Road,” sets up Nola to win the audience’s sympathy. She shows us what Nola’s lost when her dad dies, and we get a glimpse of their counterculture worldview, helping us understand why she wants to keep his memory alive by staying on the road. For them, living off-the-grid means no family or support system in place to step in when tragedy strikes, so Nola is left to fend for herself not just physically and financially but emotionally as well. The character is so well-drawn out, her survival tactics thought out, that even though she still acts like a shy teenager at times, her fierce independence is never far from the surface. Sometimes, it even lands her in trouble.

Bringing Nola to life would have been impossible were it not for Carpenter’s deeply felt performance. The former Disney Channel star embraces the unkempt look of living on the road, without any glamor or heavy makeup and her hair so disheveled, it looks like she lost her brush weeks ago. Her performance is similarly understated but eye-catching. Carpenter’s eyes tell the story she can’t tell strangers. It’s written on her frightened eyes and forlorn face. The sporadic outbursts of anger and grief make her feel genuine. She’s trying to pass off as a grown-up, but she’s still only a scared child behind the wheel of a very big van.

During her journey, Nola comes to learn a few lessons of her own. She has to rely on the kindness of strangers without her dad there to intervene if things go south. She learns the hard way that sometimes the kindness of strangers has its limits. A few times in the movie, Nola tries to settle down and imagine putting down roots for the time being, but the road and the memory of her father call her back when she doesn’t fit in. It’s a different kind of fish-out-of-water story, where instead of failing to fit in with classmates or other people her age, she just doesn’t feel like she fits in any home.

Fortunately, Nola meets some strangers who really do care about her, including Miguel, a mechanic played by Danny Trejo in a charming performance. Like a few of his other roles, he’s a grizzled tough guy at first but eventually softens up and cracks jokes. Nola befriends another girl her age named Blue (Jashaun St. John) who’s stuck in an abusive home and wants to escape to her aunt on a Navajo reservation. Their friendship, awkward at first but then warm and talkative, helps Nola realize she can use her independence to help other misfits like her.

While it has its share of bumps, “The Short History of the Long Road” is mostly an enjoyable ride. Between Simon-Kennedy’s writing and Carpenter’s performance, Nola makes for a compelling character, gently pushing the story along at her own steady pace. Sometimes she lucks into a stranger who will pay for her gas station hotdogs; other times, a stranger will leave her with only a scolding. There are childish outbursts she’ll have to atone for later and moments where she learns to stand up for herself. Throughout the film, she wrestles between the extremes of her dad’s self-sufficient lone wolf worldview and the desire to find a new home. The movie doesn’t give her an easy answer but rather measures the benefits and downsides to both in Nola’s eyes. The only answer is for her to make her own path, wherever that might take her. 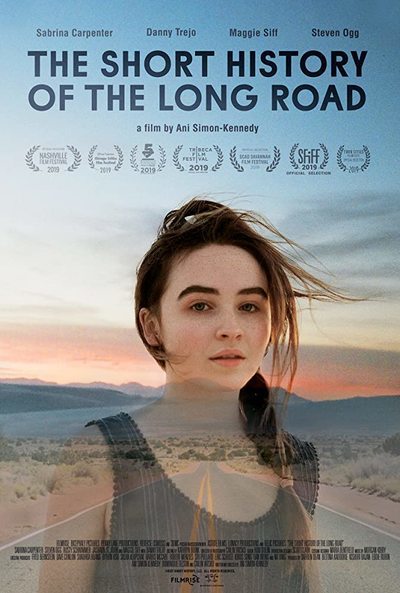