Christian faith, especially Catholicism, goes hand in hand with horror. Indeed, the alarming opulence and eerie iconography of the creed has always fed the genre its bone-chilling staples. In that regard, it’s evident that “The Seventh Day” writer/director Justin P. Lange has seen his share of the likes of “The Exorcist,” “The Omen,” and “The Sixth Sense” enough times to internalize the visual mechanics that make religiously-rooted supernatural horror films frightening and ever-appealing. But while his sophomore effort conjures up the genre’s uncanny atmospheric register, the story at its center never leaves one all that disturbed. The whole experience feels like a generic inventory of recognizable tropes—the possessed child, the creepy old woman, the deeply-concerned priests, and the Ouija board are all here. Except, the cumulative fear bizarrely fizzles before it reaches something significant or emotionally meaningful.

That’s a real shame, because Lange actually formulates a refreshing dive into familiar waters, structuring his saga of good and evil inside a framework that resembles “Training Day” a great deal. Instead of a good cop-bad cop routine, we pick up on a shtick between two polar-opposite priests—one, a seasoned, been-there-done-that exorcism aficionado, and the other, a fresh-off-the-seminary, top-of-his-class recruit putting himself out there to learn the trade from the best in the field.

Adding “The Seventh Day” to his recent career streak of middling efforts like “Bloodshot” and “The Last Vermeer,” Guy Pearce plays the former with a generically sinister edge. We meet his Father Peter in 1995’s Baltimore first, while assisting an experienced priest in an extreme case of exorcism that is about to go horribly wrong. (The promising “Give Me Liberty” actor Chris Galust leaves a lasting impression as the young Peter in this brief opening scene.) After the shrieking boy’s body deteriorates with bruises and bursts into flames, we cut to the perennially haunted New Orleans of present day, where the older Peter is to meet the refined young priest Father Daniel (Vadhir Derbez, slickly and memorably seizing a calm and composed façade). There is a nationwide rise in demonic possessions and despite the Vatican’s increasingly disapproving stance against exorcisms, someone has to deal with the mess. So the duo gets paired up by the church higher-ups, with the hopes that Father Daniel could handle the wreckage of an especially high-profile case involving a kid who had recently murdered his entire family.

The first acquaintance between the two men is rather amusing, one that pits Pearce’s disheveled priest-gone-rogue guise against Derbez’s squarely by-the-book appearance. The moments that follow lean on that difference as the two drive around town, literally looking for the devil in human form. Scruffy and clad in a robe-like overcoat, Peter routinely swears and wants to make sure he won’t be wasting his time with someone unserious or talentless. Clean-shaven and neatly covered in a clerical vestment, Daniel respectfully tries to keep up. He fails his first mission at a homeless shelter, targeting an innocent man while Peter correctly identifies a kind volunteer (Robin Bartlett, memorably hair-raising in her only scene) as the possessed mortal. “Evil is clever and demons are unpredictable,” Peter preaches like a teacher, reminding Daniel that evil spirits hide in unexpected places in order to grow and multiply.

With this sequence and various other hints that follow, Lange really tries to tap into perpetual institutional corruption within the Catholic Church, and even other organizational bodies with unparalleled amounts of power. As Daniel starts to break the ice with the aforementioned murderous child, Charlie Giroux (a terrific Brady Jenness), at the facility he’s being kept, we get glimpses into his visions of the kid’s former life with an oblivious family, as well as a sexual predator of a priest posing to help the young boy, only to abuse his trust and defenselessness.

Sadly, Lange’s efforts to critique establishments of supreme authority and influence seem half-hearted at best. Often times, he only insinuates things that he doesn’t seem to have the audacity to really dissect. What's more, he doesn’t give the audience enough time with or insight into the characters we’re supposed to empathize with. A film like “The Conjuring” was scarring in its scares because we closely got to know its central loving, tight-knit family drained of options. Similarly, “Rosemary’s Baby” was terrifying because we felt deeply involved in a lonely mother’s relatable helplessness. In comparison, Lange’s script lacks those basic human details and connections, emotionally distancing the viewer from the gut-wrenching happenings. The thoroughly signposted and blandly unraveled twist towards the end also doesn’t help.

Lange proves more successful behind the camera than on the page, especially in the murky rooms and hallways of Charlie’s hospital, sometimes dimly-lit to a fault. His compositions throughout Daniel’s chase of the evil are genuinely well choreographed and paced, and his special effects with instances of grotesque body-horror do get under one’s skin. If only you could say the same about the film on the whole.

Now playing in select theaters and available on VOD. 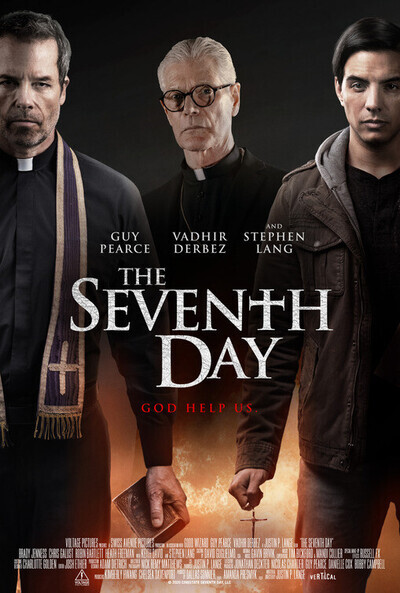 Rated R for violent content, disturbing images and some language.