Shimon Dotan’s “The Settlers” is a potent if problematic look at the hundreds of thousands of people, mainly Israeli Jews but also a few scattered Christians, who live on Arab lands occupied by Israel. The film starts out acknowledging how tricky the issue is by asking some of its subjects if they are settlers. The term is evidently a charged one. While some embrace it unapologetically, one man says he prefers “inhabitant.”

But the real nub comes when one interviewee responds that the term itself belongs to “leftists and the media.” There you have the split that makes even talking about the issues that surround the settlements so difficult: While much of the world has condemned their continued expansion and the problems they represent to the Israeli-Palestinian conflict and the possibilities of a two-state solution, in Israel itself the left and right of the political spectrum reject each other’s basic premises for understanding the situation.

It’s ironic that, though their meanings are very different, both sides see the essential problem as resulting from an intrusion of European values upon Middle Eastern realities. For some left-leaning academics interviewed in the film, the religious-minded settlers are mistakenly embracing a kind of Western nationalism that sees land, rather than faith, as the foundation of identity. For the settlers and their rightist backers, who regard the territories they call Judea and Samaria as part of their Biblical birthright, the real European intrusion is the idea of democracy. Everything would be fine, one defender of the settlers says, if people didn’t think Arabs should have political rights.

This conflict points back to an innate duality in the original concept of Zionism. On one hand, the idea was to provide a homeland for the Jewish people. On the other hand, most of its first proponents saw their envisioned state as being democratic-socialist in its political nature. The pressure being put in Israel currently by the settler movement, as many have observed, results from the way it forces these two ideas onto a violent collision course.

Among the curious features of “The Settlers” that may inspire certain reservations among viewers are the number of issues and personalities it never mentions. These range from the Holocaust to Benjamin Netanyahu. Indeed, the half-century history of the Zionist project prior to the founding of Israel in 1948 goes unexamined.

For most of its length, the film traces the history of the settler movement, using archival footage, and interviews with various academics, political figures and settlers both prominent and ordinary, old and young. While it notes that the United Nations Partition Plan of 1947 called for the British Mandate of Palestine to be divided into Jewish and Arab states, the film’s narrative really begins in 1967 with a highly emotional speech by Rabbi Zvi Yehuda Kook, who lamented the Jews' loss of contact with holy sites in the West Bank. When the Six-Day War of a month later gave Israel control of both the West Bank and Gaza, many of Kook’s followers came to regard his words as prophetic; the ideology of the settler movement was the result.

As the film shows, early Israeli governments opposed the settler project and its practical consequences. But when one politician spoke airily of being able to contain “a few dozen crazy Jews,” the settlers’ response was to come in the hundreds, then the thousands. Soon enough, there were enough “facts on the ground” that a succession of governments began to accommodate their demands in ways that would make the prospect of returning the land to Arab control increasingly difficult.

From early on, it’s clear that some settlers are motivated primarily by religion. These range from the pioneer generation who wanted to reestablish contact with sites like the Cave of the Patriarchs and the city of Hebron to modern-day, mostly young “hilltop” settlers who are literally trying to claim the high ground in what remains of the Arab West Bank. Most of these people come across as self-evidently sincere, although of varying degrees of candid racism and fanaticism. Among the more extreme are some who see Israel eventually expanding to include all lands between the Nile and the Euphrates.

But there are also settlers who seem more motivated by bourgeois creature comforts and economic advantage, and whose influx to the West Bank has driven their numbers close to the half-million mark. These people are looking for nice places to live that cost far less than houses in Tel Aviv and the coastal cities. The Israeli government has increasingly catered to their demands by building sleek, modern, Jews-only highways and bridges that allow them to whisk from their West Bank homes to Jerusalem in minutes, without having to see any borders or the misery of their Arab neighbors.

It’s the willful moral blindness symbolized by this transformation of an ancient landscape that is finally the most striking and disturbing aspect of the film, one that will probably satisfy neither side in the ongoing debate over the settlements. Whatever its limitations, though, “The Settlers” provides a vivid primer on a situation that looks inherently tragic. 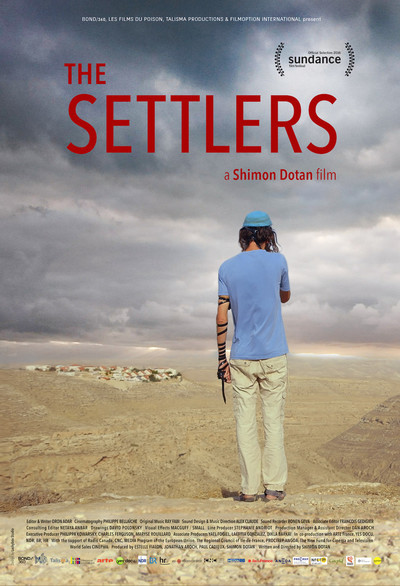