There may be no March Madness this year but there’s something truly insane related to college basketball this Tuesday. Airing on HBO after its canceled SXSW premiere, “The Scheme” tells the story of Christian Dawkins, a man whose ambition and business savvy became the focus of a major federal operation to bring down corruption in the NCAA. You may remember the fallout in 2017 that led to the resignation of Rick Pitino at Louisville, but the truth is that not much seemed to change in the NCAA. Personally, I remembered Sean Miller of Arizona’s angry press conference and a few other ESPN early reports but wondered what came of it. The truth is that most people know there’s corruption in the NCAA because it’s a system designed to support it through its nonsensical arguments about amateurism. So the question of “The Scheme” becomes not so much what did the government uncover but why did they bother? And perhaps a bit frustratingly unexplored by the film, why did they just kind of gently place the cover back when they were done?

“The Scheme” is really a profile piece of Christian Dawkins, the Michigan man who was the center of this expensive sting operation. Dawkins grew up in Saginaw, a high school basketball hot spot that has produced major players like Draymond Green. His brother looked like the next NBA star but he died at a tragically young age from an undiagnosed heart condition. With his brother’s talent, the legacy of his school’s program, and a father who was a famous coach locally, it seems inevitable that Dawkins would go into something related to basketball. And it turned out that he had incredible business savvy. At a young age, he was scouting high school players and selling the results to college coaches. He was negotiating shoe deals for players in high school. It made perfect sense that he would try to get into managing players.

And so he did. In the mid’-10s, he raised some capital and worked toward founding his own company that would kind of guide players from high school through college and into the pros. Imagine finding the right guy early and getting a cut of an NBA All-Star future. Naturally, Dawkins became an essential ally for college coaches, not just offering advice but encouraging his players to go to certain schools. However, none of what Dawkins was doing was illegal. He’s a representative, someone to speak for the players and guide their future. And yet, for some reason, the government saw him as the key to a massive corruption sting.

They sent in undercover agents to basically hand Dawkins money and then encourage him to bring coaches into the financial system. While “The Scheme” is arguably one-sided—the producers reached out to the government and coaches but they refused comment—it’s hard to watch the undercover footage here and not consider this entrapment. Dawkins repeatedly tries to explain to his new investors that bribing coaches isn’t what he does and what he wants to do. It’s not out of an allegiance to a corrupt, broken system, but it just doesn’t make sense for his business model. But someone decided that college coaches are public officials and so bribing would be enough for a corruption charge and they kept pushing their way into a horrible scheme.

Clearly, the plan was to get just enough on Dawkins to turn him to then dismantle the system further, but Dawkins didn’t play along. “The Scheme” takes a bit too long to get there—it didn’t need to be a full two hours—but the final quarter of this game is ridiculously entertaining and enlightening. Without “spoiling” anything, you’ll hear the voices of some major players in the college coaching scene who will have some serious explaining to do if they want to keep their jobs next week. And Dawkins is charmingly defiant about all of it. He’s the main reason “The Scheme” works, someone who can look at all of this nonsense and see it for what it is. The filmmakers rely a bit too much on interviews—the old criticism of "talking-head movie" could be used here—but Dawkins is a fascinating subject, and there's filmmaking skill in how they get him to open up for the first time and detail everything that happened.

The headlines that dropped on Dawkins, Pitino, and others emerged from a deeply broken system, one that punishes players for minor offenses while making millions off their talents. The fact that the U.S. government wasted so much time and resources poorly trying to push into one corner of this behemoth of corruption and greed is the real story here. And it’s well-told.

“The Scheme” airs on HBO on Tuesday night at 9pm EST. 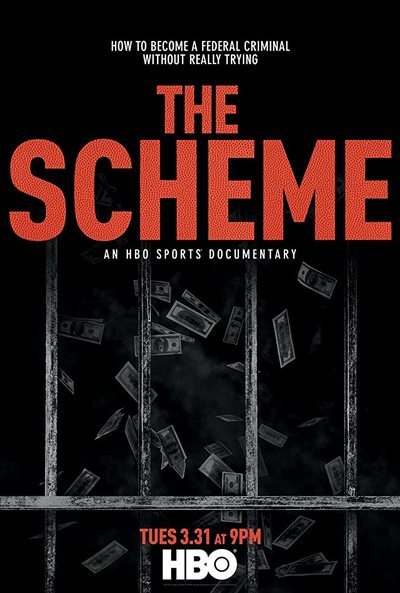