The Scary of Sixty-First

The explosion of conspiracy theories that has been fueled by the Always Online era has led to a different kind of urban paranoia. There’s a growing sense, especially for those in true crime circles, that something dark and horrifying lurks behind every apartment door. Think about all the domiciles in a NYC apartment building and then all the horror stories that unfold every day just on true crime podcasts alone. There’s probably something wrong down the hall. Or maybe even in the apartment you’re now renting. This creeping dread is the fuel for the best aspects of Dasha Nekrasova’s “The Scary of Sixty-First,” a horror/thriller clearly inspired by urban paranoia thrillers like Roman Polanski’s “Repulsion” but with a modern twist. But the filmmaking lets down Nekrasova’s concept, particularly in a cluttered and sometimes incompetent final act, leaving viewers to wonder what it all means, or if it means anything at all.

Addie (Betsey Brown) and Noelle (Madeline Quinn) are introduced doing something city dwellers know is truly horrifying: apartment hunting. From the beginning, they have that slightly uncomfortable dynamic of friends who may not be so for too long. In your twenties, you often find yourself agreeing to live with a friend even though you may not be thrilled about the prospect of seeing them every day—a mediocre roommate you know is better than a stranger you don't know. But they’re mostly cordial even as Addie seems startled by the bizarre layout of the new place on the Upper East Side that includes strange locks on certain doors. It’s a steal. They have to take it.

Addie has an oaf of a boyfriend (Mark H. Rapaport) to distract her from her roommate, but everything changes for both women when an unnamed stranger knocks on their door who is credited only as “The Girl” (played by Nekrasova herself). The Girl tells Noelle that she believes they’re living in a place that has seen untold horrors: one of the apartments in which Jeffrey Epstein used to traffic and abuse girls. That explains the low rent, although maybe not the creepy tarot card they found when they moved in.

Before you know it, Noelle and The Girl have tumbled down the rabbit hole into a Wonderland of conspiracy theories about Epstein and his apartments. They volley increasingly passionate conspiracy theories back and forth—yes, the word “Pizzagate” is used—even reaching a point where they’re convinced that Epstein’s apartments are five blocks apart because there are five points on a Pentagram. Duh. As they start to go mad with theories about what happened in the apartment, they don’t seem to notice that Addie is quite literally going insane too. She seems almost possessed by one of the children that Epstein trafficked, even terrifying her boyfriend with some extreme behavior during sex.

The best aspect of “The Scary of Sixty-First” is how Nekrasova captures the connections that can be made through conspiracy theories. As Noelle and The Girl get more involved with them, they form a bond that becomes a romance, and Nekrasova (co-host of the "Red Scare" podcast) knows a thing or two about how personal dynamics can form through intense common belief. There are so many interesting ideas in “The Scary of Sixty-First” that feel like they will be a part of the fabric of the next decade of horror and I kept trying to imagine those ideas in a film with tighter craft and performances.

Because while I can admire the effort here, the execution is another story. Hunter Zimny’s 16mm cinematography is wildly inconsistent, sometimes recalling the paranoia thrillers of the ‘70s that so clearly inspired this film but also feeling a bit slapped together, something closer to Mumblecore/indie drama filmmaking. It’s so obviously a descendant of filmmakers like Polanski and De Palma (with even a dash of Argento), but the framing here feels more amateurish, especially in the final act when Nekrasova relies too heavily on shaky camerawork to convey terror.

In the end, I was left feeling like “The Scary of Sixty-First” was all set-up and no follow-through. Sure, it gets bloody and crazy in ways that will probably turn off some viewers, but it doesn't feel feel like it has something to say about our conspiracy theory culture. Perhaps that’s the point—that this kind of QAnon spiraling out about things we cannot control will only lead to misery. We might look back on “The Scary of Sixty-First” as the start of a sort of apathetic Twitterverse brand of genre filmmaking, one that recognizes that making a horror film is harder in an age of real villains like Jeffrey Epstein. For now, it just feels like a cold shrug instead of the impassioned warning it could have been. 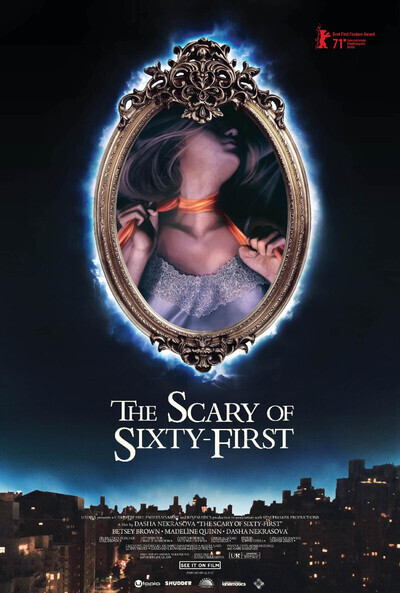 Dasha Nekrasova as The Girl