I wish we could simply dispense with a review and handle things this way: You go see the movie, and then we'll sit down and have a long and very detailed talk. And you will try to explain to me how the last scene in the movie, the one that is supposed to provide the key, fits in with what has gone before.

Because I don't think it does. Or can. Or should. I suppose the final twist is some sort of attempt by the writer-director, Amy Holden Jones, to pull the same kind of trick on the audience that “The Usual Suspects” did. I don't pretend to understand that film fully, either, but I am at least prepared to give its plot the benefit of the doubt: I believe that close story analysis would not find any actual or absolute impossibilities.

With “The Rich Man's Wife,” what we are given is the twist without the twister or the twistee, if you see what I mean. (Don't for a moment fear I am going to give anything away, since in my current state I would be incapable of knowing what to give away, or how to do it.) The movie proceeds more or less satisfactorily for 94 minutes, and then in the last 60 seconds expects us to revise everything we thought we knew, or guessed, or figured out--just because of an arbitrary ending. That went against my grain. It wasn't playing fair. Not even fair by the “Usual Suspects” rules.

Here is the story as we have reason to believe it. A blustering, hard-drinking business executive named Tony (Christopher McDonald) is married to an attractive younger wife named Josie (Halle Berry). Worried about him, she persuades him to take a vacation in the woods, but when he's called back to town she goes to a local bar to console herself, and soon her path crosses that of a man named Cole (Peter Greene).

He follows her home into the deep, dark woods. Her Jeep breaks down. He is there to help. He is threatening but ingratiating. He gathers that she is unhappy with her husband. Well, tonight, she is. But when he says he'll fix things by killing Tony, she's horrified. Tony met her, Josie explains, when she was a confused 17-year-old runaway. He asked her to marry him on their first date. Yes, he drinks too much, and there are other problems, but she is still grateful to him and has hopes for their future.

Cole doesn't seem to hear her, and eventually the situation grows into a nightmare. Tony is killed. Josie is a suspect. There is more: Josie has been conducting an affair with Jake (Clive Owen), Tony's partner in a failing restaurant. Josie stands to inherit a lot of money--or does she? If she does, she'll bail out Jake--or will she? How much does Jake's wife, Nora (Clea Lewis), know? What about those compromising Polaroids of Josie and Jake that she delivers to the police? Can the police really believe Josie's story that Cole acted on his own? And so on. This plot is not blindingly original; its elements are familiar from many other crime stories. But it does become intriguing because the writing is good and the characters are original--especially two cops in key supporting roles, who argue over whether Josie is a suspect only because she's a black woman married to a white man. There are also amusing scenes involving Nora, who is played by Lewis as a ditzy goofball with a mind of her own.

Halle Berry is convincing, too, and I cared about her, especially as the plot began to turn against her. Was she innocent or guilty? Innocent, I thought, although maybe guilty if the evidence is looked at in a certain way. What I was not prepared for was the twist at the end, which doesn't seem to follow from anything that went before, and makes all of my speculation irrelevant.

Am I holding the ending against the entire movie? Yes, I suppose I am. “The Rich Man's Wife” is not a great movie, but it's competent and effective enough, and I might have been tempted to give it a recommendation if I hadn't felt so cheated at the end. Somehow a movie like this establishes a contract with us, an unspoken agreement that some things cannot be doubted even though others are up for grabs. When a few of the sure things turn out to be tricks, that's part of the fun. But when *everything* is smoke and mirrors, I walk out wondering, where is Keyser Soze when we really need him? 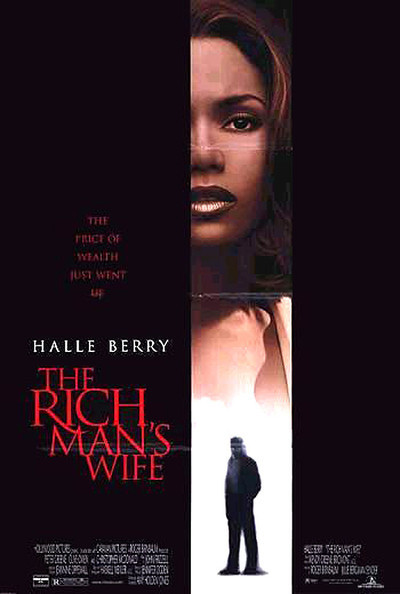