Few things unite the world like a rescue, and the hope it provides for a return to normalcy. And few things are as potentially callous as the media swarming on a story that could end in disaster. The tension between optimism and opportunism is at the heart of “The Rescue,” the latest documentary from Academy Award-winning filmmakers Elizabeth Chai Vasarhelyi and Jimmy Chin. The focus here is the Tham Luang Nang Non cave rescue in Thailand, which gripped international attention during June and July 2018—and which has since been so seized upon by various studios, streamers, and production companies that a documentary like “The Rescue” struggles to find its footing.

In summer 2018, it was impossible to escape minute-by-minute, hour-by-hour, and day-by-day updates to the story of 12 Thai tween and teen members of a soccer team and one of their adult coaches, all of whom were trapped in the flooded Tham Luang Nang Non cave system. As the Thai military worked with a team of international divers to figure out how to penetrate the cave system and find the boys, news crews from around the world set up camp. (You might remember that Elon Musk inserted himself into the situation in a typically messy way.) And after the boys were saved, a rights’ bidding war took place. Netflix ended up with the rights for the boys’ story and National Geographic Documentary Films ended up with the rights for the divers’ story, and so that’s where “The Rescue” focuses.

The divers’ perspective is theoretically an exciting position from which to approach this story. These people traveled from around the world to Thailand on their own dime to volunteer in a high-stress environment—a life-and-death situation, really—amid an array of cultural and language barriers. But what hampers “The Rescue” from the beginning is that Vasarhelyi and Chin are working backward. Unlike their previous documentaries “Meru” and “Free Solo,” in which the duo were involved from the beginning, shooting their own material and guiding the projects forward with their own perspectives, “The Rescue” is more of a collect-and-shape project. Vasarhelyi and Chin had 87 hours of footage shot by others with which to work, with number of interviews conducted over Zoom, and the result is that “The Rescue” lacks a certain level of urgency.

But “The Rescue” starts promisingly, and with very little preamble. Outside of the Mae Sai cave, where monsoon floods have trapped members of the local Wild Boars youth football team, the atmosphere is one of barely organized chaos. A mess of military members, divers, and volunteers are trying to figure out operational logistics (how to keep power on, how to keep water out), while relatives weep and pray, and reporters wait. Once we’re right there, the documentary backs up, explaining the geology of the cave (limestone retains water), its 10 km-long layout (with numerous twists and turns), and the mythology surrounding it (the goddess Nang Non, for whom the cave system is named). Then, with all of that in place, “The Rescue” turns its attention to the British and Aussie divers who traveled to Thailand at the request of British expat and diver Vern Unsworth, who lives in the country and saw that the responders needed more experienced assistance. “We’d never done an operation like this before,” one of the members of the Thai military admits as they face six inches of rain per hour in the monsoon season, and so outside help was a necessity.

Cave diving is a small community, and many of these men share similar tales of the disbelief with which other people treat their hobby of going into tortuously tight spaces, crawling through gaps barely wider than a human body, and exploring the unknown. They bring their homemade gear, their slight social awkwardness (“All of us are not team players,” admits diver Rick Stanton), and their mixture of optimism and wariness to Thailand. And as each day passes, their worry that their presence might hurt more than help grows. “The Rescue” well utilizes interviews with these men, and the video they shot while in Thailand—including their first sighting of the lost boys in the cave. Those little nuggets of new information are legitimately moving, and are complemented best by the film’s final act, in which the divers stage their final rescue attempts. (The reconstructions filmed at Pinewood Studios are flawlessly integrated with the divers’ GoPro footage.) It’s impressive how “The Rescue” builds phenomenal tension even when most people watching the documentary might already know how it all ends, and those are the moments when Vasarhelyi and Chin’s ability to precisely communicate a deeply dangerous situation are strongest.

The directors have emphasized in interviews and marketing for “The Rescue” that it should be watched by families of all ages, and that’s a fair suggestion; viewers who are the same age as the stranded teammates might be particularly engrossed. It would be impossible not to be emotionally moved by this story, and in that way, “The Rescue” delivers. But between Vasarhelyi and Chin’s inability to speak with the boys or their families, and the documentary’s initially languid pacing, “The Rescue” feels like half a story told fairly well, but still, half a story.

“The Rescue” is now playing in limited theaters and expands nationwide on October 15. 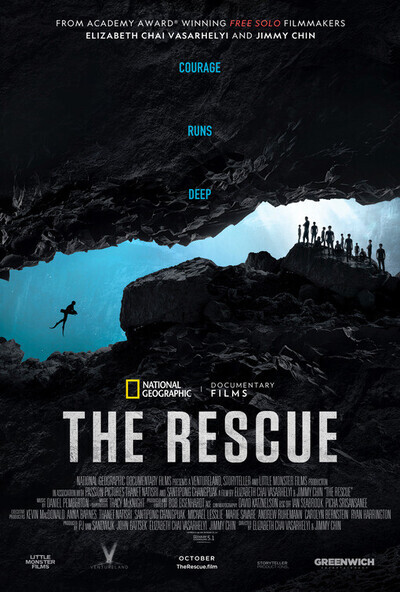