Fans of cheap thrills and cheesy B-movies are sure to be frustrated by “The Requin,” a new shark pic that waits about an hour before introducing major carnivorous fish action. That alone might turn off viewers since “The Requin” only lasts about 89 minutes, and most of the movie plays out like a soapy two-hander about survivor’s guilt. A grieving married couple (Alicia Silverstone and James Tupper) are marooned at sea after a monsoon knocks loose their above-water Vietnamese villa. His leg is broken, her cell phone doesn’t work, and nobody knows where they are, not even the native sharks.

Shot with a few green-screens in Universal Studios Orlando, “The Requin” looks like it was recorded live during a particularly harrowing Zoom meeting. Some bad image-compositing makes the movie look cheap and some lame dialogue doesn’t help matters much, especially whenever tensions flair, which is often. But Silverstone’s unguarded and credibly freaked-out performance makes it easy to follow writer/director Le-Van Kiet as he strings viewers along til the movie’s frantic and mostly satisfying finale. “The Requin” may not be the best showcase for Kiet’s talent after “Furie,” his thrilling 2019 Vietnamese martial arts drama, but it’s consistently intriguing, which makes up for other glaring deficiencies.

Silverstone plays Jaelyn, a traumatized tourist who, along with her husband Kyle (Tupper), goes on vacation in order to forget a recent miscarriage. Jaelyn’s grief overshadows most of her actions during the movie’s long pre-shark build-up, everything from her inability to sleep to her anxious refusal to accept Kyle’s vain attempts at consoling her (“The baby didn’t have a heartbeat, so she didn’t have a chance”).

Most of the movie’s action takes place on Jaelyn and Kyle’s small over-water villa. There’s no Wi-Fi, no food or drinkable water, and almost no signs of nearby human life. In this inhospitable context, Silverstone’s performance has to make up for a lot. She meets that challenge with an intense performance that’s somehow never too pitchy or over-the-top.

As Jaelyn, Silverstone is the voice of escalating panic, a thankless role that very few B-movie stars bother to develop since this type of character is usually an afterthought during both the screenwriting and shooting process. Still, Silverstone’s so into her character that Jaelyn rarely seems like a generic meat puppet; at bare minimum, she’s distracting enough whenever Kiet takes too long to deliver the bloody goods.

The worst thing I can say about “The Requin”—whose title doesn’t really make sense since the requiem “requin” shark is more of a guest star than a co-lead—is that Kiet’s ear for pulpy dialogue could be stronger. I mean, it’s nice to see that Jaelyn and Kyle are a healthy, supportive couple, but there’s not enough dramatic variation or tension in so many scenes where he reassures her as she tries to balance teeth-grinding hysteria with fight-or-flight adrenaline. There’s some mild gallows humor throughout, but generally speaking, Kiet doesn’t seem to have had enough resources or encouragement to jump-start clunkers like, “I dragged us into this mess. We would have never been here if it weren't for my dread.” Wasn’t there supposed to be a shark in this movie?

Kiet does successfully keep viewers guessing though, sometimes to the point where being strung along for so long seems more impressive than the rest of the movie’s microbudget charms. There’s some compelling (and grisly) later scenes involving an unsubtitled Vietnamese fisherman (Danny Chung) and at least one good fake-out. Kiet’s also extends his soft-boiled psychodrama approach to the movie’s more sensational scenes. His shark attack set pieces are consummately dreadful since Kiet’s clearly thought about how to represent Jaelyn’s circumstantial peril in ways that put us in her skin and on a budget.

I’m having a hard time imagining a world where “The Requin” finds a receptive audience beyond already invested fans of sharks, Alicia Silverstone, and/or promising Vietnamese-American filmmakers. Shark fans might hope for more, especially if they inevitably stumble upon highlights from the movie in auto-playing videos shared by social-media savvy cinephiles.

Still, aside from some brief gonzo moments, “The Requin” doesn’t give a good Silverstone performance enough support, which is a shame since her character should have only had to do so much emotional heavy-lifting given this movie’s nature as a when-animals-attack cheapy. I don’t think you can really love “The Requin” based on its modest strengths, but there’s enough here to make 89 minutes move a little faster. 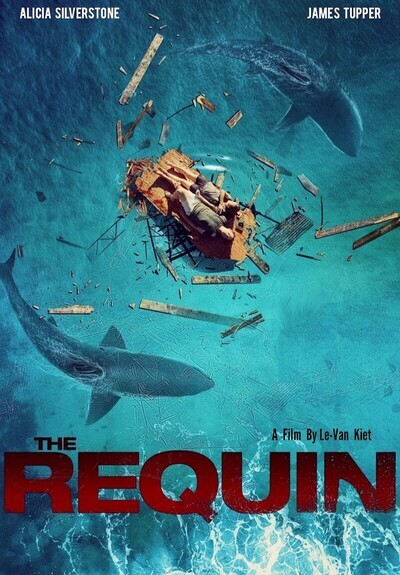 Rated R for language and some grisly images.