A relationship drama with a twist, “The Rental” has been accused of switching gears halfway through and becoming a different genre altogether. While one could watch the first half-hour of the film and think they had stumbled onto a Sundance indie movie that fits more in the character-driven world of co-writer Joe Swanberg than what the film eventually becomes, I disagree with the idea that this isn’t a horror movie from front to back. At first, it’s more about the horrors we inflict on each other, especially when we lie to our loved ones, and then debut director Dave Franco essentially makes that horror corporeal. It’s not particularly new to suggest that human failures lead to actual villains—consider the origin stories of Jason and Freddy, just as an example—but there’s a claustrophobic cause-and-effect in “The Rental” that keeps it humming, and feels fresh. The minute that two characters make a crucial decision, you know it’s all downhill from there.

Franco has suggested that “The Rental” was conceived out of his general discomfort at Airbnb rentals. I get it. We just accept that we’re spending time in someone else’s house—someone else who has a key and can come and go as they please. Franco took that general unease and turned it into “The Rental,” the story of two couples who will almost certainly break up in the near future ... if they can survive the weekend. At first, with its wood shrouded POV shots, one might mistake this for an homage to ‘80s slashers, but it felt more akin to a Michael Haneke movie to me. Like Haneke, Franco is interested in actual, physical horror compounding emotional devastation and destroyed domesticity.

Charlie (Dan Stevens) has a success to celebrate at work with his partner and friend Mina (Sheila Vand). From the beginning, it feels like Charlie and Mina are close in ways that could arguably be called dangerous. The film opens with her physically over his shoulder, giving the impression that they are one of the two couples, and then twisting it to reveal that Mina is really dating Charlie’s brother Josh (Jeremy Allen White). The success has led Charlie to an Airbnb listing for a gorgeous house and he suggests that the two couples—Charlie’s wife Michelle (Alison Brie) fills out the quartet—take the chance to get away for the weekend. They’ll hike, drink, do some drugs, and hang out in a hot tub. What could go wrong?

From the beginning, there are signs that something could go very wrong, both in the relationship department and things that are far more sinister. Mina reveals that she tried to rent the house and was denied by the manager, a creep named Taylor (Toby Huss), only to have Charlie get confirmed an hour later. Was Mina denied because of her race? Taylor blatantly asking how she “got mixed up” with the other three white people pretty much confirms that. And Mina is uncomfortable when it’s clear Taylor has been in the house while the four were out for a walk. There’s an argument to be made that Franco and Swanberg are suggesting something simple with their movie: If a rental or the person renting it makes you uncomfortable, go somewhere else.

They don’t. They party, they make mistakes that they try to cover up, and then “The Rental” gets gnarly. The shots of the locked door under the house and the figure in the woods pay off in unexpected ways and the tension mounts. There’s an immediacy to “The Rental” that I really liked. The first hour may burn too slowly for some people, but I found the characters engaging, and the tech elements are top-notch in how they add tension without resorting to cheap tricks. Director Sean Durkin (“Martha Marcy May Marlene”) was an executive producer and his skill with atmosphere is on clear display here, and cinematographer Christian Sprenger (TV’s “Atlanta” and “GLOW”) does excellent work at conveying how even the nicest homes can start to feel threatening.

Some decisions made by these two couples can feel a bit too clean and tidy in retrospect—there’s a version of “The Rental” that feels a bit more organic and less polished that I think would work even better—but there’s no denying that Franco lands his punches when he wants to. It’s a confident directorial debut, one that’s clearly been made by someone who knows exactly what he wanted to do with every frame, every performance, and every technical decision. A lot of actors and young genre directors come into horror cautiously mimicking the movies they like. What’s remarkable about this one is that while it’s easy to see a lot of Franco’s influences in “The Rental,” he still finds a way to make this house his own. 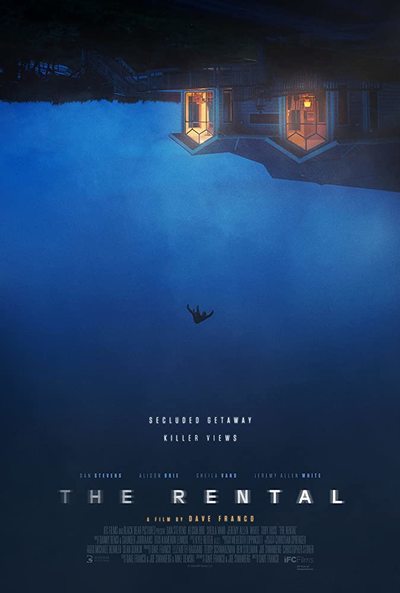 Rated R for violence, language throughout, drug use and some sexuality.