"The Public Eye" contains a couple of great juicy movie performances. They're from Joe Pesci and Barbara Hershey, playing New York City fringe-dwellers who try to make a living from the kinds of people who come out after dark. They also fall in love, I think. You may think differently. They're the kind of people who should ask themselves, "Am I really in love, or does it just feel so good when I stop hitting myself over the head with this pistol butt?" It's the 1940s. Pesci plays a guy named Bernzy, who is a free-lance photographer for the tabloids. He cruises the night in a souped-up coupe with a police radio under the dash and a darkroom in the trunk. He takes pictures of mobsters, politicians, crooks, gamblers, cops and ladies who ain't no ladies. A lot of these people are dead when they sit for their portraits. When Bernzy sells a picture to the Daily News, they run a credit line that says "Photo by the Great Bernzini." He takes his work seriously. Someday he wants to publish a book of his photos. He thinks ordinary pictures of ordinary people can be art. Bernzy reminds me of Weegee, the great New York street photographer who also took pictures of the disreputable and the unlovely and thought his work was art. They laughed at him, but check out his prices in the galleries.

Bernzy is the perpetual outsider. His relationships are all through the view-finder. One night Kay Levitz (Hershey) asks him for a favor. She runs a nightclub she inherited from her husband, who was old when she married him and dead shortly after. There are people who think she married him to get the club. Now they want the club, but they don't want to marry her. They want to muscle her out. Kay thinks maybe Bernzy can give her some advice, help her out.

He is willing to try. He is willing, despite his lifetime policy: "Don't get involved." Writer-director Howard Franklin is subtle and touching in the way he modulates the key passages between Pesci and Hershey. There is a lot that goes unsaid between them. We can maybe guess from Bernzy's eyes and actions how he feels about her, but he never tells her. He keeps his distance. He can maybe hope she feels the same way. She plays it close.

One of the best things about the movie is the way it shows us how seriously Bernzy takes his work. He doesn't talk about it. He does it, with that cigar stuck in his mug, leading the way with the big, ungainly Speed Graphic with the glass flashbulbs. In the movie's big scene of a mob assassination, he stares death in the face to get a great picture. He doesn't even seem especially noble. It's what he bred himself to do. At one point he is asked to turn off the police radio in his car, and he says, "It doesn't turn off." This is his philosophy of life.

The plot of the movie advances the story on the surface, while the romance develops in an unacknowledged subterranean fashion.

Everything leads up to a moment when Bernzy turns his head away from her and says, "You have no idea what I would have done for you." This is the best kind of love - unrequited. There are moments in "The Public Eye" that made me think a little about "Casablanca", especially the earlier scenes when Bogart is still mad at Bergman.

Higher praise is not necessary. 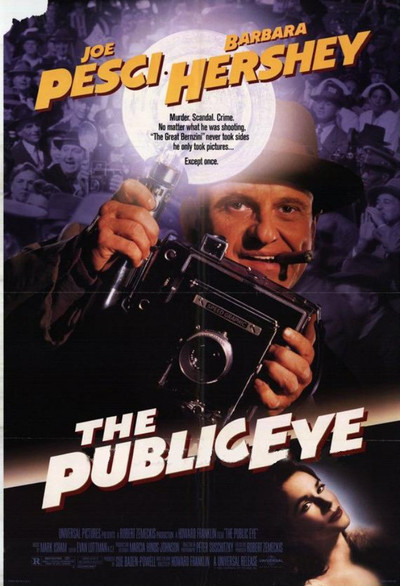