“The Proposal” reckons with how deeply one can love an artist and their work—next to blood pumping romance, it’s just about the most intense relationship a human being can have with something, whether it’s with a filmography, a discography, or collection of art. Director and artist Jill Magid, for example, deeply loves the creations of Luis Barragán, a Mexican architect whose hypnotically simple projects—homes with massive stone walls, blocks of juxtaposing colors that tell a story—have inspired her for years. And yet, Barragán's legacy is virtually owned by a furniture company in Sweden, who essentially refuse to share the rights to his creations. Magid’s very passion to free Barragán's work fuels this often compelling saga through a twisty, international and years-spanning real-life mystery, and past a few disagreeable editorial choices. Magid essentially casts herself as the lead of this documentary, which has a wild way of questioning ownership when it comes to an artist that so many people love.

The documentary’s mystery plot starts at a dead end: a wealthy Swiss woman named Federica. She received the rights to the art as an engagement present from her husband, and has since held onto them as part of the Swedish furniture company her husband owns, Vitra. Most distinctly, they've copyrighted Barragán’s name and designs, without the accent. Thousands of drawings, letters, blueprints, dreams—all of it hoarded in a private archive. Even photographs of Barragán’s architecture in Mexico can’t be distributed, though you can see the buildings for yourself (as Magid does, spending time in Barragán's home). This ownership has inhibited the rest of the world from seeing it, while Federica states in correspondences to Magid that they're using the archives to create a massive project about his work.

With Barragán having died in 1988 and Federica not being shown on camera, the film creates elusive and enigmatic characters with its sensitive approach to the presence everyone has in this story. Federica's letters are read by someone else, but she looms throughout, especially as her letters are accompanied by exterior shots that study the Vitra headquarters, a monstrous, mostly monochrome behemoth of sloping steel walls, like a gauche bastardization of Barragán's architecture. As Magid shares their letters, Federica states at one point that things are lonely down in the archive. Magid's editing takes us back to Vitra headquarters, making us wonder how isolating it must be to see art as private property.

And while Barragán and Federica are off-screen, Magid is distinctly gentle with her own camera presence, often filming herself from the back, making herself always secondary to the art she shares the frame with. In her reverent ways she’s like an Antonioni character, her presence secondary to the massive and imposing environments that the viewer studies through atmosphere, not exposition. Even her voiceover, which accompanies passages of her inhabiting Barragán's home, has the stillness of someone speaking quietly in a museum.

Toward the film's halfway point, Magid hatches a bizarre plan/poignant art project to try to win over Federica that need not be spoiled, and gives the film's title its purpose. In the documentary’s nutty style, it leads to storytelling that both bolsters and hinders the project—good in that Magid’s plan sets the movie off on an exciting course of events, the story’s enigmatic characters and abundant passion combining for an increasingly controversial course of events, paved with questions considering what parts of an artist belong to their fans (it's very exciting to see Magid herself doing something others might find reprehensible). But this plan is also where the movie's cumulative power can waver, as Magid frustratingly leaves audiences in the dark about her intent, ignoring that audiences will deduce what’s really going on before the movie’s big reveal.

"The Proposal" is initially a frustrated film, especially as its first act can stew on its outrage for what's been done to the artist's legacy, literally making Barragán's work speak for itself by focusing on the present more than the past. But the movie, and Magid, are sprung from this by the hope of creating a connection—the story's core is about two people with the same obsession, divided by their ideologies. As much as "The Proposal" can be gripping with its heady adventure, its compassion has the most complicated and fascinating presence throughout. 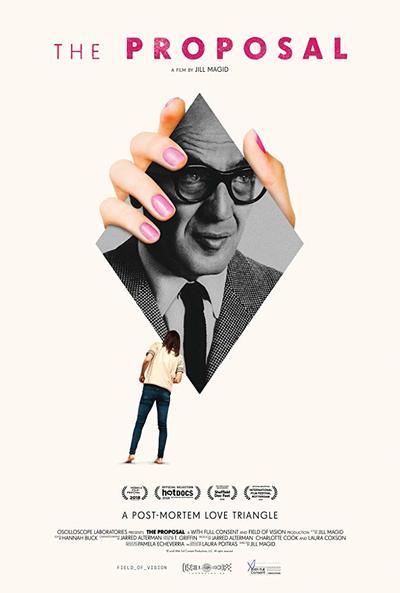