There's a tagline on the posters for "The Prodigy," a new horror film about a possessed child: "There's something wrong with Miles." That's an understatement, and not just for the obvious reasons. Miles is the object of much hoopla in "The Prodigy," which was written by Jeff Buhler ("Midnight Meat Train") and directed by Nicholas McCarthy ("The Pact"). But Miles is never distinct enough to be worth caring about. He's also not scary because his actions are seemingly only motivated by Buhler's need to get to the next schematic horror movie plot point. Worst of all: McCarthy's direction is so sleepy that a number of key scenes fizzle out before they can pay off with the next big jump scare. "The Prodigy" doesn't work because Buhler's scenario is too predictable to be involving and McCarthy's direction is too indecisive to be gripping. One of these two problems might have been surmountable, but both, at the same time, is lethal.

Also deadly: Miles (Jackson Robert Scott), an eight year-old wunderkind who, we are told, is super-smart in some unspecified areas, but also developmentally delayed in other unclear ways. Realistically, it's pretty hard to tell what's wrong with Miles because Buhler doesn't spell it out. Miles appears to be somewhere on the autism spectrum, based on the way that he skittishly interacts with his understandably worried mother Sarah (Taylor Schilling). Then again, you might also think that Miles looks normal enough, right until he starts cursing out Sarah in Hungarian, attacking another kid with a pipe wrench, and doing unpleasant things with the family dog.

I realize that outlining this type of film's plot is like ragging on the apparently scripted nature of pro-wrestling matches. Why bother? We all know that the fights are rigged and the wrestlers are actors. I appreciate that, but I must re-assure viewers: there is nothing to "The Prodigy" beyond what I just outlined to you. And honestly, I did try to love this movie, having previously enjoyed films by both Buhler and McCarthy. I also tried to ignore all the little tropes and jump scares that Buhler and McCarthy took from earlier horror films, and often blatantly, as in almost shot-for-shot nods to lesser-known films, like Mario Bava's "Shock" and Damiano Damiani's "Amityville II: The Possession." I tried to focus on what I was looking at on a moment-to-moment basis, just so I could suspend my disbelief long enough to invest in these types of characters again.

Sarah and her emotionally distant husband John (Peter Mooney) are not only boring to watch, but also boring to think about. These guys don't just make generic bad decisions, like wandering into the wrong dark room, or participating in a staring contest with the wrong possessed child. Sarah and John are also poorly developed characters. Buhler and McCarthy rely so much on the familiarity of their scenario that they never bother to explain why Sarah immediately accepts the judgment of Feore's hypnotist, or how, exactly, was John affected by childhood abuse (we can guess, but you get what I mean). It's all barely simmering on the film's surface because "The Prodigy" mostly follows Miles as he pointlessly terrorizes other forgettable characters.

So if there's something wrong with Miles, it's that his creators don't do much with him. They wind him up, and expect viewers to be impressed, because hey, Violent Children are creepy! Unfortunately, the film's scare scenes aren't even well-executed: an ostensibly creepy walk down a dark stairway appears to take a lifetime before it climaxes with the most obvious jump scare imaginable. "The Prodigy" wasn't made by incompetent filmmakers. But that doesn't make it any less wrong. 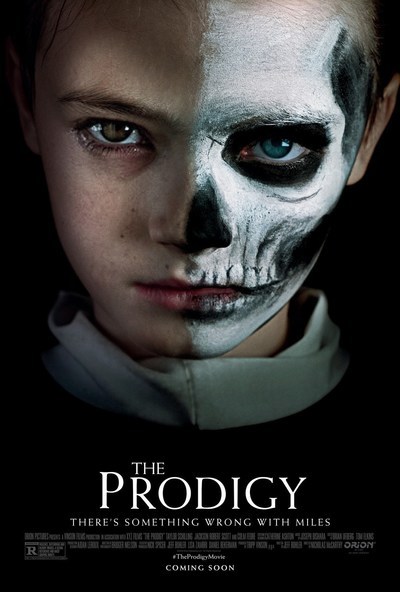