At first, "The Perfection" seems like is going to be an "All About Eve"-type story, with the sexual complications of "Black Swan," and the pressures of "Whiplash," until it careens into David Cronenberg body-horror, obliterating any expectation that you know where things are headed. Not knowing where anything is going is the primary fun of "The Perfection" (and it is fun). With a script by Eric C. Charmelo, Nicole Snyder and Shepard, "The Perfection" has a gory grindhouse sleaze overlaid with the tony gleam of the upper-crust, a very sick combo.

Charlotte (Williams) was a onetime star pupil in the Bachoff Academy of Music, an elite music school outside of Boston, until she had to drop out to care for her dying mother. In the opening sequences of "The Perfection" Charlotte flies to Shanghai to reunite with her former mentor, Anton (Steven Weber) Bachoff and his glamorous wife Paloma (Alaina Huffman, mostly known for her stint on "Supernatural"). Anton and Paloma run the school Charlotte attended, a kind of Hogwarts for kid cellists, and are in China holding a competition for new pupils. Charlotte was once one of those hopeful child stars, and now all she has to show for it are long scars on her wrist from a failed suicide attempt. In China, she meets another one of Anton's protégés, Lizzie (Browning), who came into the Academy just as Charlotte left. Lizzie has had the life Charlotte wanted: fame, wealth, a solo career. At first, their conversation is stilted, weighty with suppressed intensity. All this dissolves when they go out dancing later. They get drunk, have a great time, fall into bed together. The next morning, Lizzie invites Charlotte to come with her on a roughing-it trip she's planned through western China. Charlotte, who has nowhere else to go, is thrilled to tag along.

As the rickety bus careens through a wild landscape, Lizzie starts to deteriorate. Maybe she has a stomach bug. Maybe she's just hung over. But she's clearly very sick. Panic ratchets up in Charlotte as she tries to help her friend. Nobody on the bus speaks English. The driver won't pull over. They are miles away from civilization. Both actresses dig into their characters' escalating terror, so much so that the film starts to feel like a claustrophobic bell jar, so stifling you'd do anything to escape. Browning, in particular, plays the illness exploding through her body with such palpable gusto you may start to feel sick yourself. And then ... things get weird. And then ... Shepard "rewinds" the film (literally running the story back in reverse), showing the exact same events leading up to the bus ride, only with some of the blanks filled in, with information and context added.

It's not the last time the film "rewinds" itself but it is the most effective. The truth unfolds in hallucinatory sometimes grotesque fashion, the film looping backwards, then forward, and then back again. The pedestrian "rewind" gimmick outstays its welcome, but there's enough B-movie madness—gore and screams and violence and sex—to make up for it. There are times when Williams and Browning literally seethe with rage. Not surprisingly, these are the moments when "The Perfection" is most alive.

In the past couple of weeks, everyone's been talking about movie "spoilers" (to spoil or not to spoil?), and by "talking" I mean "Twitter." The debate continues as we speak. I'm not particularly interested in the spoiler conversation, but I did think of it after seeing "The Perfection." It's impossible to discuss the film without giving away its secrets, and the secrets—the tiers of reveals—are the whole shebang, really. I managed to go into it cold, despite the reviews from the film's debut at Fantastic Fest last fall. Consider the following a spoiler as well as a trigger warning, because I could have used one: Child sexual abuse and the threat of rape are plot points, which may seem like it wouldn't be a big deal in a horror movie. But using rape—particularly the rape of children—as shorthand is lazy, and handled in such a way here that I recoiled from it, and from the film itself. Your tolerance for this sort of thing may vary, but I figured a warning for this is in order. 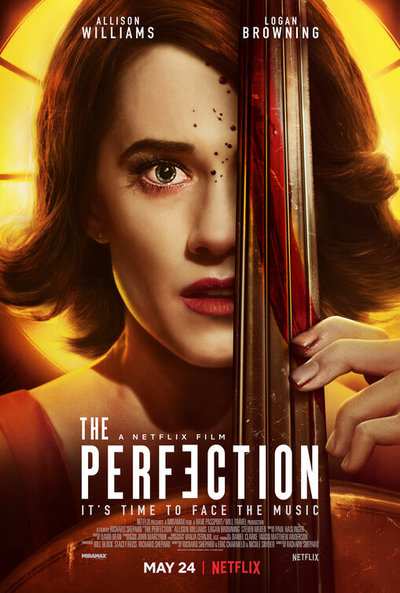