Witches face off with outlaws in “The Pale Door,” director Aaron B. Koontz’s horror-western stew with nothing much to contribute to either field. The filmmaker surely throws ample genre staples into his cauldron: you will get your train robberies, creaky watering holes, and flouncy prairie skirts with corseted tops here, topped with enough bloody gunk later on when “The Pale Door” attempts to take a ghoulish turn with semi-decent make-up work. But Koontz’s command over the material is so absent that it is at times hard to distinguish his film from a spoofy Western-themed fair where a group of friends play dress-up for amusement.

That’s too bad, as things get off to a promising enough start during a brief flashback scene. We are at an isolated farm located somewhere remote, when the young, kindly Duncan (Jake Ryan Scott) reassures his scared little brother Jake (William Tate) that he would always look out for him no matter what. But before we can process the root of Jake’s childlike fears, the brothers’ nighttime bonding gets cut short by a group of horsemen who raid the boys’ land and violently murder their parents.

While the act seems premeditated, the underlying motivations for the crime remain unexplained for some time, until it resolves to a deeply unsatisfying reveal of family secrets. And once we suddenly find ourselves at an indeterminate time in the future where the rest of the story unfolds, “The Pale Door” quickly wastes all the goodwill earned by these early, intriguing few minutes. For starters, it is impossible to tell how much time has passed since the aforementioned prologue, mostly due to poor judgment in casting. While the age difference between the young siblings in the opening couldn’t have been more than ten, the duo looks worlds apart later, with the older Jake and Duncan played by Devin Druid and Zachary Knighton, two actors separated by 20 years of age in real life.

This visible generational discrepancy annoyingly lingers over the scene when the boyish Jake—a strait-laced saloon busboy—and the bearded toughie Duncan—now the head of the notorious Dalton Gang—run into each other on the eve of a planned heist by the imposing bandits. Jake reluctantly agrees to join the clan, only to find himself in the midst of a calamity that leaves his brother gravely injured. Enter Pearl (Natasha Bassett), who appears out of thin air (well, out of a trunk, more accurately) and swears by the well-equipped neighboring town she lives at—why not take Duncan there to get him examined by the village doctor?

Not knowing that they’re headed for their own cursed adventure straight out of “From Dusk Till Dawn,” the tribe—including Stan Shaw’s wise Lester, a father figure of sorts for the brothers—follows her to the ominous town. The ghastly location is ran by head witch Maria (Melora Walters) and other attractive, bloodthirsty sorceresses seeking ... justice? Revenge? A human tribute for some grand, otherworldly purpose? It would have been nice to know, except “The Pale Door” gradually proves to have little interest in the witches beyond certifying them as gorgeous but truly evil women who somehow ended up here after being burned in Salem once upon a time. So don’t expect a feminist twist or a tale of womanly retaliation here once the men start sexually engaging with the temptresses, only to learn the grim truth later. On the contrary, “The Pale Door” proudly takes the most clichéd, old-as-time route towards misogyny (e.g. beautiful women are man-eating witches) and pits the female spirits against a rowdy bunch of men who task themselves to take the ladies down once and for all.

Perhaps this “Hostel”-adjecent premise wouldn’t have stunk so foul had “The Pale Door” presented a few original ideas, turning its limited budget into an opportunity for restraint. But between its borrowed visual cues from the likes of “The Assassination of Jesse James by the Coward Robert Ford,” stiff ensemble acting, scenes of trite male bonding and wildly puzzling design elements—rarely did a Western look so backyard-green and sparklingly clean—Koontz’s movie goes South fast with no alchemy of its own. 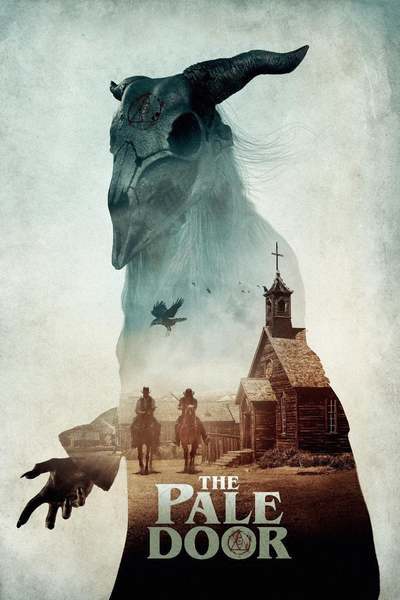