Stop me if you’ve heard this one before: A British con man in Colombia, dressed as a priest, is being relentlessly pursued by a very hell-bent old Yankee seeking a retribution he calls justice. Complicating matters for both is a feisty young reprobate with plans of her own.

Things seem even more familiar when you cast Nick Nolte in the role of the hell-bent Yankee and Tim Roth in the role of the not-as-sly-as-he-thinks fox. Known as “The Padre,” Roth’s character is on the run for reasons directly connected to his relationship with Nolte’s Nemes, who sports a huge scar on his face. That Nolte’s character’s name is “Nemes,” so close to “Nemesis,” is an indication of how subtle the script by Stephen Kunc is. In case you’re hazy on the dynamic, late in the game Nolte growls at Roth, “My hate is a spear aimed at your heart.” I wonder if one reason average people aren’t inclined to read “Moby Dick” nowadays is because they’ve heard so much of it recycled as melodramatic movie dialogue.

The complicating factor is Lena, played by Valeria Henriquez, who’s trying to quit Colombia for the U.S., albeit not for an entirely conventional reason. Now in her late teens, she’s learned a trick or two; the film’s opening scene has her trying to bribe, without success, a passport office official for a visa. Stumbling upon the scamming Padre just as he seems about to fall into Nemes’ clutches, she piggybacks on his car-thieving escape.

The movie is tolerable during the pursuit, even if the leads are playing roles that are clearly reprises if not retreads of past glories for them (Nolte recalls the cranky cops of the “48 Hours” movies, while Roth essays a less frantic variation on any one of the hoodlums he’s played on and off since the 1990s). And speaking of retreads, Luis Guzmán is here too, playing Nemes’ for-hire sidekick, and here, too , is familiar ground for the actor. Newcomer Henriquez is appealing, and her character’s search for a father figure, or something, is not unconvincingly portrayed. Lena comes from poverty, and in one scene she marvels at a motel swimming pool; another girl her age sniffs that the pool is crummy, and that she can’t believe she has to stay in such a hole, and Henriquez portrays Lena’s slight humbling with commendable nuance.

Director Jonathan Sobol has an apt if not avid eye for gritty and colorful locations, and when the movie is at its most loose-limbed it’s a pleasure to watch. But around the time the director resorts to a trunk-point-of-view shot that’s turned into a not-terribly-flattering imitation of “Pulp Fiction,” “The Padre” begins to take itself more seriously than the wafer-thin back stories of the opposing characters should allow. Given that the viewer is more likely to gravitate toward an investment in Lena than in either of the grizzled fellows, the question of which of them is most likely to be redeemed becomes almost academic by the time the script starts breaking out the Melville quotations. In a sense it’s pleasant to see Nolte, Roth and Guzmán settling into their roles as if they were old slippers, but these great performers aren’t completely outfitted to settle for Greatest Hits work. Are they? 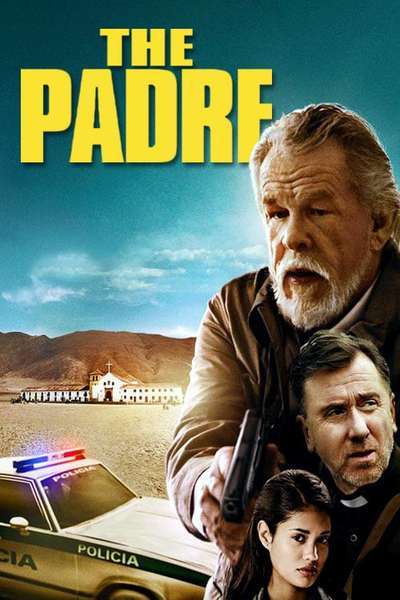 Tim Roth as The Padre

Benjamin Petersen as The Mark