Perhaps because we all secretly dread the thought of having to defend ourselves in our own domain one day, the fiendish subgenre of the home invasion thriller will never run out of reasons to exist. The latest film to exploit everyone’s fears behind shut gates and locked doors is Julius Berg’s “The Owners,” an aptly gross-out, even amusing horror movie that comes with a satisfying (albeit a now-formulaic) twist. Here, the hunters become the hunted when they mess with exactly the wrong house.

Loosely based on the graphic novel Une Nuit de Pleine lune, “The Owners” doesn’t feel new or groundbreaking by any measure. Still, this increasingly bizarre film is grisly and absurd in all the right, self-aware ways; qualities that the comparable (and far superior) “Don’t Breathe” also possessed as another recent horror film that turned the tables against its lowlife aggressors. The scares of Berg’s feature directorial debut don’t quite measure up to that of “Don’t Breathe.” But the good news is, they don’t actually try to. In that, “The Owners” refreshingly owns and commands its brand of silliness, spattered with plenty of bloody, over-the-top body horror and nervous humor in a way that attempts to honor Stuart Gordon’s gaudy ‘80s spirit.

That the old, kindly couple they’re spying on would eventually be straight out of “The Dolls” (though without all the murderous porcelain figurines and marionettes) is unbeknownst to the small-time hooligans of “The Owners.” We meet our dodgy, hard-swearing trio in the English countryside—there is the slimy Terry (Andrew Ellis), pragmatic Nathan (Ian Kenny) and as his grotesque, partially-shaved hair screams from miles away, the gang’s lead baddie Gaz (Jake Curran). Rapping and killing time by the home of the Hugginses—a gentle-mannered Doctor (a cringe-inducing Sylvester McCoy) and his confused-looking, mentally ill wife Ellen (a perfectly cast, near-Satanic Rita Tushingham)—the boys are soon joined by Nathan’s girlfriend Mary (Maisie Williams of “Game of Thrones”) who begrudgingly gets dragged into the action. On paper, their plan looks simple enough: informed by Terry’s unsuspecting mom who cleans the elderly pair’s home, the band knows that the seemingly well-off duo would soon depart, leaving their safe unattended in the basement.

Saying that things don’t go quite as expected would be an understatement. The safe proves to be unbreakable, aggravating our hilariously dimwitted group of criminals who just get a kick out of breaking things and getting into fights with each other until the Hugginses return home unexpectedly early. Co-writers Berg and Mathieu Gompel have fun with the crowd’s dynamics. On one hand, the shadily gentle doctor tries to comfort his disoriented wife while both are hand-tied in the basement. On the other, the thugs engage in petty fights, while Mary slowly reads the room, takes matters into her own hands and decides to incapacitate Gaz who only makes things worse. But in ultimately helping Mr. and Mrs. Huggings, will she be the final girl who lives long enough to tell the tale?

As the chaos grows amid all the cut limbs, smashed skulls and corpses, the sinister secrets of the good old Hugginses start spilling out, turning their handsome and over-stuffed mansion into a cat-and-mouse playground. Along the way, the story can’t help by indulge in excess, burdening our scrappy heroine Mary both with an unplanned pregnancy and a completely out-of-place case of sexual assault. A third-act shift in aspect ratio (when we inexplicably get forced to watch some of the most nerve-racking action of “The Owners” in a tiny box) also feels incompatible with the film’s flamboyant ambitions.

Nevertheless, a deliciously campy ending, as well as Williams’ memorably brawny performance, give this thriller an entertaining, weightless kind of edge. And that quality honestly feels cathartic, especially at a time when everything else in the world—including and perhaps consequently, the horror genre—seems so damningly serious. 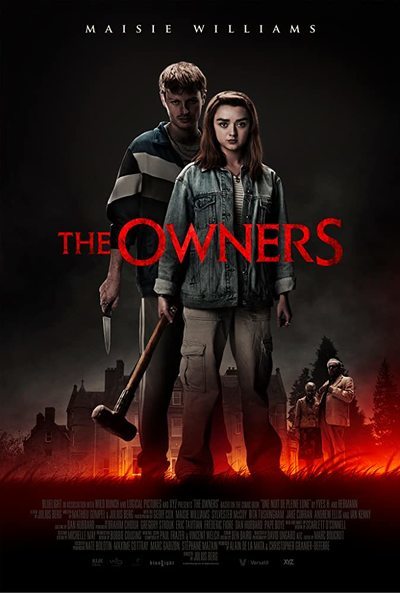