Actually, beefy, six-foot-three Brit Craig Fairbrass feels more like a subpar version of Jason Statham, given how generically ludicrous this B-movie's plotting and action are. But the premise will sound familiar.

Fairbrass plays the swaggeringly named Lex Walker, a British army veteran who's now working as a private contractor for a firm in Afghanistan. When he learns that his estranged daughter, Samantha, has turned up dead under mysterious circumstances in Los Angeles, he immediately blows off his responsibilities and flies out to identify her body. But when he pulls back the sheet at the morgue, he realizes that the twentysomething blond woman lying cold and still before him is not his daughter after all, but a stranger.

The rest of "The Outsider" consists of the vexed Lex trolling various bars and bad guys' hangouts, making threats in his thick, Cockney accent. Fairbrass' resume includes voice work on several versions of the "Call of Duty" video game, but that doesn't make him any more convincing here. The tinny, echoey audio in this low-budget affair doesn't do him any favors, either.

Lex busts skulls for information about his daughter's whereabouts and even fires off some impeccably placed rounds when necessary, but never suffers a scratch himself. Despite never having been to Los Angeles, he navigates the sprawling city with astounding efficiency and quickly figures out which receptionists to cajole, which bartenders to hassle.

His ultimate target is Samantha's former boss, cyber millionaire Karl Schuster (James Caan, slumming), who offers polite concern and pretends he couldn't possibly have known who Samantha was among the hundreds of people he employs at the laughably named Most Industries. He's slick, but his thick New York accent betrays him and suggests he's lived a hard, messy life—that, and the fact that he's willing to shoot incompetent underlings dead in his office without blinking an eye.

Lex gets help infiltrating Schuster's tacky, heavily guarded Beverly Hills lair from a surly, money-hungry waitress (Shannon Elizabeth, wearing a tight dress and a scowl). She pretends to be a high-priced escort to distract Schuster so Lex can sneak in and steal the secret data revealing a worldwide identity-theft ring—and, oh, never mind. It's all so dully far-fetched, does it really matter? It is sadly telling, though, that the primary female characters in "The Outsider" are a woman pretending to be a prostitute and a woman who may or may not be dead.

The police detective conducting his own parallel (and legally sanctioned) investigation of what happened to Samantha and her deceased doppelganger lets Lex's vigilante body count rise. Because really, what else is he going to do? The cop is played by Jason Patric, sporting the bored look of a customer waiting for the bank to open so he can cash his paycheck.

Patric's character refers to Lex as "the limey" at one point, as if this movie's echoes of Steven Soderbergh's 1999 thriller weren't already obvious. Director Brian A. Miller, who co-wrote the script with Fairbrass, clearly was trying to make that sort of modern-day film noir, the kind that lurks in the seedy underbelly of L.A. His interiors are full of smoky light streaming through half-closed blinds, and his (many, many) aerial shots of the city aim to depict it as a vast, glittering wasteland. (His geography is distractingly mangled if you know how the freeway system here works, but that's the least of the film's problems.)

Fairbrass could be a viable and even enjoyable B-action hero if given the right material. He's got a striking, muscular presence and he seems to understand the innate guilty-pleasure ridiculousness of the genre. Until then, he'll have to remain an outsider himself. 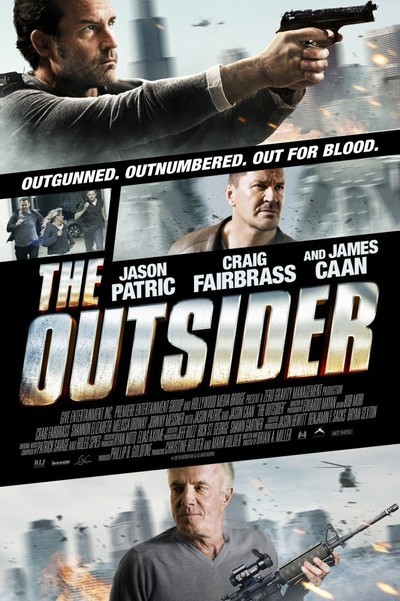