Director Rod Lurie’s first film in almost a decade is also one of his best, and the first movie since our national nightmare began in 2020 that I really regretted not being able to see in a theater. While I would always prefer a theatrical exhibition, the truth is that films like “The King of Staten Island” and “Trolls: World Tour” haven’t lost a lot by transitioning from the multiplex to VOD. However, “The Outpost” is designed to be a visceral, you-are-there experience, a film like “Black Hawk Down” or “Saving Private Ryan” that drops viewers in the middle of an absolute nightmare. While dozens of movies have sought to recreate the unimaginable horror of literally fighting your life, “The Outpost” connects more than most, thanks in large part to Lurie’s technical skill and a young cast that elevates what could have been overly familiar material. In particular, Scott Eastwood and Caleb Landry Jones do the best work of their respective careers.

“Our mission from now is what it’s always been.” “Yeah, to survive.”

Just looking at the geographic layout of the outpost at Kamdesh in Afghanistan in 2006, one realizes how that mission to survive was a daily concern. Lurie and his cinematographer Lorenzo Senatore give viewers a tracking shot at the start of “The Outpost,” revealing how this real outpost was basically in the worst possible spot, at the center of a deep valley. The enemy Taliban forces always had a dominant perspective on it, and were able to hide out on the many ridges that overlooked it. They could shoot directly down into the outpost, which had been placed there near the Pakistani border to help with community relations, which quickly broke down after attacks and mistrust formed with the local elders.

Lurie and screenwriters Paul Tamasy and Eric Johnson (“The Fighter”) adopt an episodic approach for the first half of the film, as the troops at Kamdesh outpost suffer tragedies that require new leaders to take command. This half consists mostly of routine conversations interrupted by gunfire. The dialogue often overlaps, and many of the faces blend together, but that’s part of the point. These men were similar in age and often in background, and they all alternated the extreme boredom of a distant outpost with the constant terror associated with imminent attack. A few faces do stand out, including Lieutenant Benjamin D. Keating (Orlando Bloom), Staff Sergeant Clint Romesha (Scott Eastwood), Specialist Ty Michael Carter (Caleb Landry Jones), and Captain Robert Yllescas (Milo Gibson).

Every performance in “The Outpost” is better than average, particularly for movies like this, and that’s one of Lurie’s greatest accomplishments. He threads that needle in which he somehow captures the “average guy” nature of this group of soldiers while giving his performers just enough of what they need to stand out. Eastwood is particularly solid, giving a performance that is so reminiscent of his father’s youth that one can almost close their eyes and hear Clint. (Try it when he says, “No. Not today.” It almost sounds like young Clint dubbed the line.) And Jones continues to impress, particularly in the back half of the film.

That half consists almost entirely of the two-day attack from October 2009, one of the most brutal modern assaults of the neverending war that has been in that region since 9/11, all of it boiled down into about an hour of filmmaking. After learning that the outpost was finally being closed, the Taliban fighters decided to deliver a message and sent hundreds of soldiers to attack the men there. Lurie adopts a Ridley Scott style in which bullets and shouted orders dominate the filmmaking, but he never gets lost in the action, as so many modern directors tend to do (looking at you, Peter Berg). He manages to convey the insanity without resorting to cheap filmmaking tricks or manipulative storytelling.

“The Outpost” isn’t the first film to document how human errors led to the loss of life—the Battle of Kamdesh resulted in multiple disciplinary actions against people who failed to support the base in the first place—and it certainly won’t be the last. Sadly, acts of heroism often emerge from acts of failure on a structural level. What elevates Lurie’s film is the balance, never allowing his film to turn into blind jingoism, or a castigation of a broken system that sacrifices young men. He keeps his eye where it belongs, on the real people caught in the middle of it all, stuck in the valley of war. 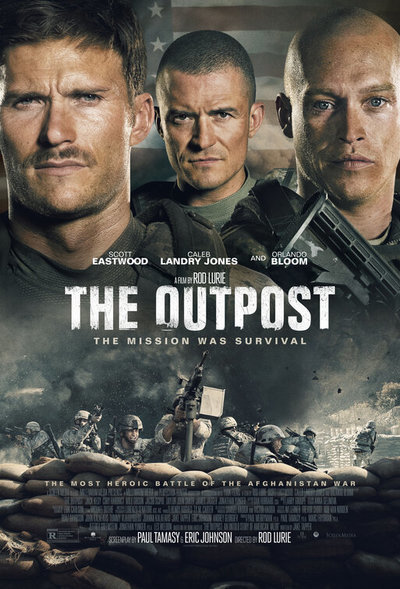