The beguiling setting of João Pedro Rodrigues’ “The Ornithologist” is that of a Portuguese forest, where animals coexist and the woods are peaceful. Naturally, people have their own discordant beliefs on what they should be doing in this world, and it leads to both chaos and surrealist enlightenment for a bird watcher named Fernando (Paul Hamy). As Fernando merely travels to get back to civilization after a kayaking accident, his saga becomes that of an existential journey set within a low-key survival movie narrative.

“The Ornithologist” begins at a place of stability. Fernando (Paul Hamy) has ventured out onto a river in Portugal while looking for endangered storks; a couple of Chinese missionaries (Han Wen and Chan Suan) are traveling through the woods nearby have become lost, and are afraid of the spirits of the forest. When the two meet, they communicate primarily through compassion: Fernando’s kayak has capsized and he has nearly drowned, but they revive him before demanding that he protect them and show them the way. After he refuses in order to go his own way, he wakes up the next morning tied up, told by the missionaries that they can’t let him go because they are cursed.

Thirty minutes in, and that’s just the start of when “The Ornithologist” changes from its unassuming nature into something that’s truly gripping, an introspective nature movie about Man vs. Earth as much as Man vs. Man. As it becomes surrealist, the story is propelled in particular by spirituality. The script’s interactions become allegorical in Fernando’s different chapters with people, such as the missionaries, or a deaf young man who is laying out in the sun naked with his goats, or a group of naked women in the woods who ride horses and carry weapons. These passages very often have a finite quality; they offer both mysteries and finality.

There's always something to ponder with this film, which gets stranger and more polarizing as it goes along. In the process, the pacing is meditative, often with the stillness of a quiet pond. This all leads to one of the film's best attributes: an atmosphere of vast, open space but very specific ideas. Only the most worthwhile filmmakers can give us that.

Hamy is built like a Jason Statham body double, but his body language and worried blue eyes are that of someone who is completely disarmed. He's in an unpredictable landscape, and he is vulnerable. As the story goes on, he's compelling to watch navigate this world, with the sound design of rushing water or shots of birds flying through the air dominating the senses. He becomes a fascinating surrogate into this type of survival narrative, in which we’re never quite sure where he will wake up, who might change his life next.

This is a movie well worth seeing on the big screen, and also worth its almost two-hour, contemplative running time time. Comprised of picturesque wide shots and various images that sometimes show Fernando and the humans from an animal’s point of view, "The Ornithologist" vividly recalls the creation of a “Transformers” movie—its scope is a series of various, massive location shots, but instead of filling them with CGI robots, it is humans who stick out as unnatural, secondary. And any time Fernando explores a location like a fort or abandoned tunnel, or sees a piece of his broken boat wedged into a campfire, all that is manmade looks just a bit uglier. The effect is both immersive for the world and luminous to the soul of Rodrigues’ film, which reminds us how nature seems to function well enough without human beings and our unnatural technology or our gods. Whether we're trying to make sense of the world by worshiping a higher being or merely just watching from a distance, we are all just renting the space. 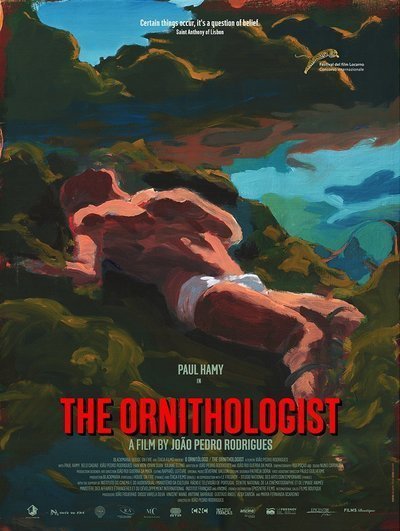