Netflix loves a mess. Take two of the company’s hottest offerings right now: season five of “Selling Sunset” and “Conversations with a Killer: The John Wayne Gacy Tapes.” The streaming service by no way invented this type of entertainment, but they have the authorship of a content company that churns out such provocative reflections on reality, week by week. Its latest slop, scraped from the bottom of the barrel and served for an audience of armchair detectives, is Emma Cooper's “The Mystery of Marilyn Monroe: The Unheard Tapes,” and it's a special kind of gross. It is too touch-and-go, too speculative about her life and mysterious death, to be of any genuine purpose.

This is the kind of true-crime documentary in which the lead voiceover repeats words, and the editing sometimes recaps everything so you don’t miss anything juicy. In one moment, it practically provides the full plot synopses, recreated here in full, using punctuation from Netflix subtitles:

That garbage bit of slam poetry from investigative author and reporter Anthony Summers comes almost 75 minutes into the movie, presumably to remind desensitized, or honestly, distracted viewers, to all the hot topics at play here. “The Mystery of Marilyn Monroe: The Unheard Tapes” does not even build an emotional journey, with her own life or Summers' investigation; there are no significant emotions for a viewer here except cheap disgust, awe, and pity. This documentary does not feel for Monroe's storied mental anguish beyond the impact she can have when the doc suddenly shows us a picture of her dead, in bed. She’s little more than a golden-haired question mark; a famous corpse.

The narrative within this documentary is more about Summers, to show off the tapes that helped him write his Monroe book Goddess, which was published in 1985 after two years and hundreds of interviews. And in terms as crude as this doc is, it’s more or less about getting him on camera to talk about this before he is unable to do so himself, just as his phone calls in 1982 were trying to grab the full story from the aging likes of directors Billy Wilder, John Huston, close friends of Monroe, and the children and spouse of her last psychiatrist, Ralph Greenson. Summers gets a mix of witness accounts, largely made of first-hand speculation; the documentary collages them, and lets actors lip-synch the calls.

There are few answers here, and it's more about stirring: "The Unheard Tapes" expands on conspiracy theories about Monroe’s relationship with the Kennedy men, and the way she made government agents sweat by being such a leftist. But her stardom and impact is only as important to this documentary as its tragedy, the same with how it touches on more sinister parts of classic Hollywood business—the transaction of sex, with names taken from black books—but can only offer ominous shadows.

For all the time the film spends saying her name, touching upon the different traumatic relationships she had in her life, and briefly showing clips from when she thrived in front of the movie camera, Monroe remains dehumanized. She has been cast here as another disembodied voice that shares close-ups with ominous footage of rolling audio tapes. When watching the rare speaking footage of her, she has so little physical space; the media public did not know or care how to talk to her, they didn’t know what to do with her but ask her about children, or needle her about superficial things. We can see how much talking and thinking about her in this way did not help her, as in footage of her being swarmed outside of a mental hospital.

In 2022, we are generally a bit more receptive to mental health than during Monroe’s time—just look at, of all things, other pieces in the Netflix algorithm, like circus-ready reality show “Love is Blind,” in which characters advocate for therapy in that show’s reunion. But we haven’t gotten much better at perceiving a life story like that of Monroe’s; stuffing it into the true-crime documentary grinder for a passive shock is just as tabloid-esque as when she was still alive, and just as craven. 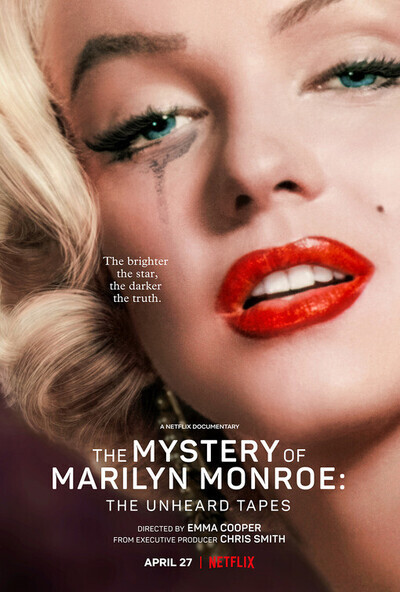 The Mystery of Marilyn Monroe: The Unheard Tapes (2022)

Marilyn Monroe as Self (Archive footage)